President Trump and PM Modi addressed a crowd of Indian-Americans. Trump provided Modi with legitimacy to seek votes from the Indian diaspora for the Republican Party. Narendra Modi addressed a huge gathering of Indian Americans in Houston. 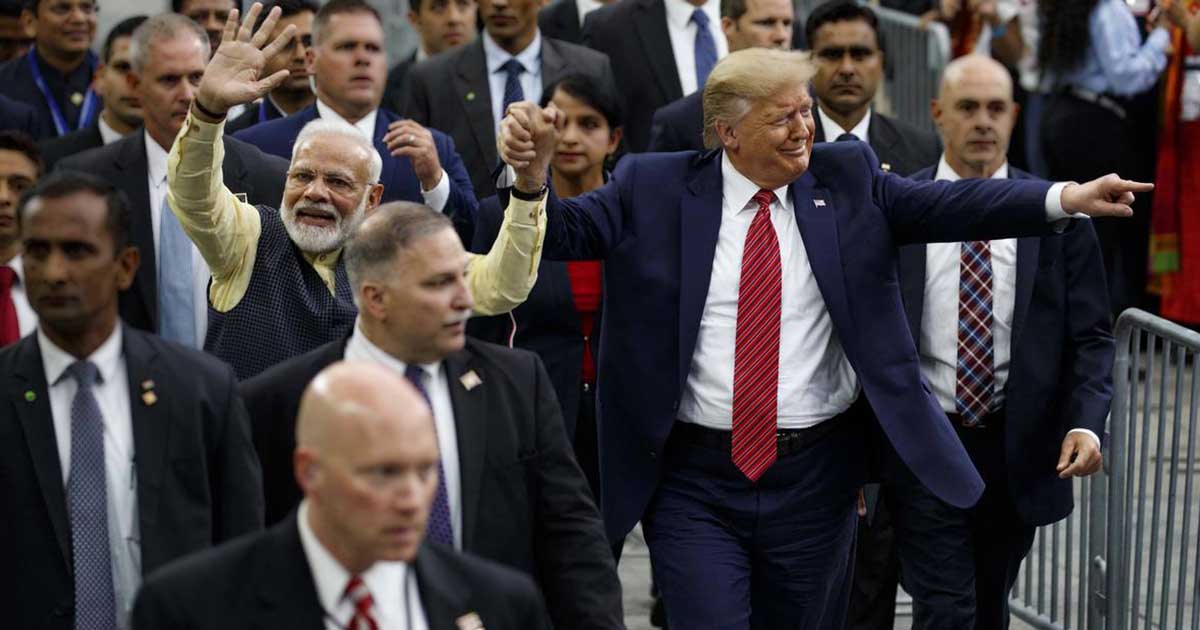 United States President Donald Trump and Indian Prime Minister Narendra Modi on Sunday addressed a crowd of Indian-Americans and sought their support to strengthen their political base. Both leaders, known for lack of political seriousness and understanding of liberal values, declared themselves united in a relentless fight against “terrorism,” vowing a close, personal alliance in front of tens of thousands of Indian-Americans.

The two leaders, like-minded nationalists fond of fiery rallies and skeptical of traditional media, heaped praise on each other in an unusual joint appearance inside the NRG football stadium. PM Modi praised the American President and repeatedly thanked him for standing up against terrorism.

However, outside the stadium, Hindu, Muslim, Dalit, Sikh and Christian groups under the umbrella of Alliance for Justice and Accountability (AJA) held anti-India demonstrations and rallies.

The march, which started from Sikh National Centre in Houston, culminated at the NRG Stadium — the venue of the Indian premier’s public gathering. The protesters made their presence felt with a dress rehearsal along with tractors and trailer trucks decorated with flags and protest slogans.

The voice of Kashmiris has been throttled because of the media ban. There’s no access to life-saving medicine or even food

The Kashmiri-American group, which planned the protest outside of Houston’s NRG Stadium against Modi, said India had violated basic human rights and cut off contact with people in occupied Kashmir.

Why is Trump Supporting Modi?

According to the Alliance for Justice and Accountability, Azaad Austin, Council for American Islamic Relations (CAIR) and Black Lives Matter, who held a press conference on Saturday, Modi’s visit and Trump’s decision to attend it was aimed at mobilizing voters of the largest Indian diaspora for the Republican Party.

Since Trump is the cherry on top of the saffron pie, this means intensive security arrangements were made, with most streets cordoned off.

A day earlier, at a press conference held to mobilize protesters, journalist Peter Friedrich shared the history of the RSS and how it was inspired by Germany’s Nazi party. A member of CAIR said: “Our ancestors chose to remain in India at the time of partition, but what Modi is doing right now is taking India towards a scary fascist direction.”

As Modi started his speech, outside the stadium the fervor and anger of thousands of Indians, Pakistanis, white allies and supporters of all races and nationalities is palpable.

Fareena, a resident of Houston, said she wasn’t with any group or rights organization. “Just a concerned desi who wants to raise awareness about what’s happening in Kashmir. We need to get rid of Trump and Modi,” she said.

Since the media is not allowed to have free coverage in Kashmir, it has caused serious suspicion across the world as to what the Modi-led government is up to in IoK. “The voice of Kashmiris has been throttled because of the media ban. There’s no access to life-saving medicine or even food,” said Raja Muzafar of the Kashmir Global Council.

Holding a poster that reads `Free Kashmir’, he said: “I’m attending to demand an independent Kashmir. The thousands of Kashmiri flags here in solidarity shows that the world is with Kashmiris.”