Indian Prime Minister Narendra Modi’s extravagant “Howdy Modi” rally in Houston is all set to be hijacked by the extensive efforts of the Pakistani, Kashmiri and Sikh diaspora, who have joined hands with other Houston communities to protest against the barbarism and violence in Indian occupied Kashmir 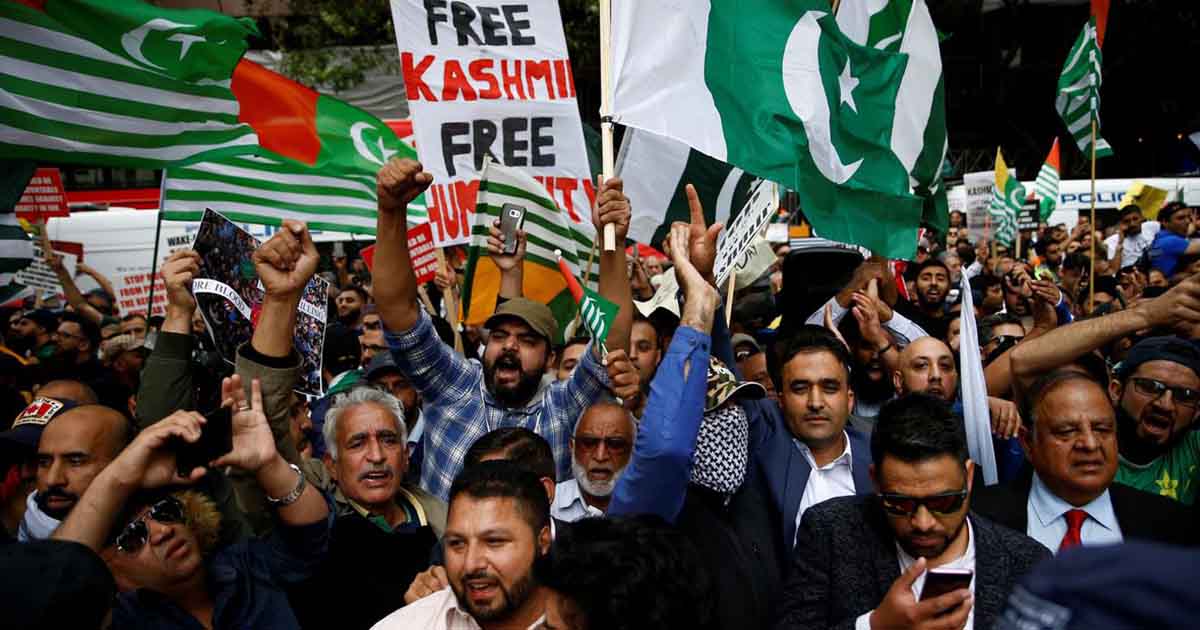 The Pakistani diaspora in the United States has responded to Prime Minister Imran Khan’s call with unprecedented zeal and fervor. Pakistanis and Kashmiris across New York City, Houston, and other US states have mobilized to stage a mammoth protest to highlight the ongoing humanitarian crisis in occupied Kashmir and put Indian Prime Minister Narendra Modi to shame for his unlawful and barbaric actions.

Twitter and other social media platforms are rife with calls to protest in New York, and more enthusiastically in Houston, where Indian Prime Minister Modi is scheduled to hold a joint rally with US President Donald Trump. Publicized as the “Howdy Modi” rally, it is said to be the largest, most expensive rally organized for the Indian diaspora in the US.

Amazing what PM is ready to do for a stock market bump during his #HowdyIndianEconomy jamboree.

At + 1.4 Lakh Crore Rs. the Houston event is the world's most expensive event, ever!

But, no event can hide the reality of the economic mess “HowdyModi” has driven India into.— Rahul Gandhi (@RahulGandhi) September 20, 2019

Pakistani, Kashmiri and Sikh communities in Houston have joined hands to stage a mammoth protest against Narendra Modi’s “Howdy Modi” rally. Speaking to Global Village Space, Masood Hassan Raja, former President of the PTI Houston Chapter and the Kashmiri American Council, shared details of the protests arranged by the Pakistani diaspora in the Texan city of Houston.

Raja, who is also the former President of the Pakistani American Association of Houston, continued, “Pakistani diaspora has been actively invoked and participated in all matters concerning Pakistan. It can be an earthquake in Azad Kashmir, flood disasters or Kashmir cause they never missed an opportunity to not serve the national cause. They have been contributing generously to Shaukat Khanum Cancer Hospital since its constitution.”

Explaining the political involvement of Houston’s Pakistani diaspora, Masood Hassan Raja shared, “Houston’s Pakistani community is fully involved and participating in mainstream politics. The most vocal and leading personality is Sajjad Burki, currently serving as President PTI USA. He, along with his team of energetic fellow Pakistanis is arranging protest rallies against Indian atrocities in Kashmir.”

This Sunday, fascist Indian PM Modi will be welcomed in Houston by thousands including Donald Trump. We’re asking for people to protest in the thousands as he continues to reign terror on the people of Kashmir and elsewhere. Please join & spread the word. https://t.co/xGHQGrhMRf

Masood Raja shared that Narendra Modi and the RSS extremist ideology will witness an unprecedented political defeat as 30,000 Pakistani, Kashmir and Sikhs will come out to protest against the ongoing crisis in Indian occupied Kashmir.

Uniting for the first time Sikhs from Punjab and Muslims from Kashmir held a “dress-rehearsal” protest rally against “Howdy, Modi” event, scheduled to be held in a week in Houston pic.twitter.com/NSso1wOa65— Khalid Mahmood Khalid (@samaylive) September 16, 2019

He said, “Pakistani Americans have planned to stage an impressive protest of 30,000 Pakistan Americans Kashmiris, members of the Sikh community and civil liberty organizations against killer Modi on Sept 22nd.”

Please join protest against #Modi's #Hindutva #fascism directed against #Muslims in #India and in #Indian Occupied #Kashmir. Go to #NRG Stadium in #Houston at 9AM on Sunday Sept 22, 2019 to join the protest. https://t.co/erTCMS18S6 pic.twitter.com/0byMffIne0— Riaz Haq (@haqsmusings) September 15, 2019

“Atif Khan the president of PTI Houston chapter, Dr. Amerjeet Singh of Khalistan Council, Dr. Ghulam Nabi Fai of World Kashmir Council are fully involved in the arrangement of the well-coordinated event of protest against Modi and gang of RSS murderers. Another prominent personality, Mr. Asad Shah played a significant role in organizing the Kashmir protest rally in Houston.”

Truck Protest against Nazi Modi going along 249 and nearing I-45 Houston pic.twitter.com/q48LTMaCNK

The former president of the Kashmir American Council added, “All major freeways of Houston city witness the electronic billboard saying ‘Modi is neo Hitler, save the world from new Nazism’, ‘Kashmir Freedom Now’, ‘Freedom for all’, ‘Freedom for Kashmir’, and more. Besides other things, hundreds of trucks and cars are covered with Free Kashmir banners.5 million Houstonians witness these signs every day.”

In Houston, Texas – around 20,000 Kashmiris and Sikhs are readying themselves to protest against the atrocities unleashed by the Modi government in J&K.#AdiosModi

Masood Hassan Raja revealed that the Pakistani diaspora and PTI members in Houston have contacted the Houston City Council members, alongside US congressmen, and members of Houston’s Jew community to join hands in the protest against the rebirth of neo-Nazism.

Raja further added, “PTI Houston has already contacted U.S members of House of Representatives congress and senate member along with former Presidents Obama and Carter about Indian killings in Kashmir. Former foreign secretaries Madeline Albright and Hillary Clinton are also updated about the grave and critical situation in Kashmir.”

He revealed that Houston’s Jewish community has also joined hands to protest against the fascist Indian Prime Minister upon his arrival. Masood Raja said, “Houston Jewish community has been contacted and briefed about the rebirth of neo Nazism and connection between RSS BJP their Hindutva ideology and Nazism. They are reminded about yesterday’s holocaust of Jews and today’s holocaust of Kashmiris committed by Hitler’s lover. They promised to join the protest against fascist Modi on his arrival.”

Observing on the propaganda being spun by Indian news and media outlets, Masood Hassan Raja said, “Indian media, which is nothing but its master’s voice, is so upset over the anti Modi protest that it is publishing fabricated stories of terrorist threat outside the arena where Modi will address his audience, especially Patels from Indian state of Gujarat, who are traditionally funding providers of BJP.”

The former President of the PTI Houston Chapter concluded, “I must say that the Pakistani diaspora always supports credible leadership from back home. Imran Khan is more respected and credible for them to plead Pakistan’s and Kashmiri’s cases as compared to those who have no credibility and are morally bankrupt. Imran Khan is still a role model since he is not involved in any financial corruption”

Imran Khan says he has lost faith in dialogue with India