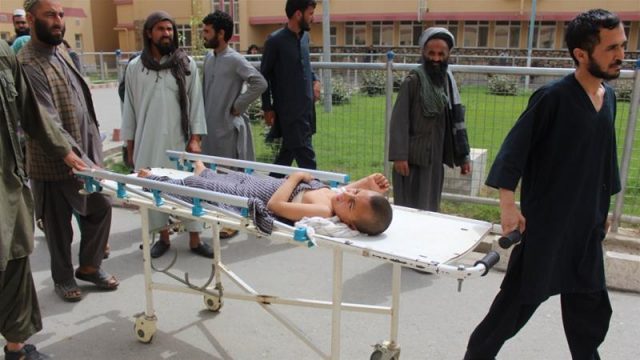 As par the scanty reports, more than 100 people are reported dead so far after a religious ceremony in a Madrassa in Kunduz province of Afghanistan was bombed by Afghan Air Force. It is reported that there was a huge gathering of people, who were there to attend “Dastar Bandi”, a ceremony to honor the children who have memorized the Holy Quran. There were children as young as 11 or 12 years old in the ceremony who were to be presented with awards and gifts for the completion of their religious courses

Along with many locals, the congregation included a high profile member of the leadership group, generally known as Quetta Shura, said the Afghan government official in his briefing. However, the official denied acknowledging the reports of civilian causalities, citing all killed as combatants.  On the other hand, Afghan Taliban did acknowledge the air strike carried out on the Madrassa but also claimed that none of their fighters were present or harmed in the process.

Eyewitnesses along with the doctor at Kunduz hospital and Afghan security sources, on the condition of anonymity, did confirm the massive civilian casualties, mostly children. Kunduz province has a high concentration of Afghan Taliban. It is believed that one of the members of the elite leadership council of Afghan Taliban, “The Quetta Shura”, was present at the ceremony, making him the high-value target being beleaguered by Afghan forces.

In the age of information revolution, when suppressing news has become very difficult, incidents like these raise a question mark over the credibility of news outlets, making people question even the authentic news they break next.

NATO forces have distanced themselves from the attack, asserting that Afghan Army and Airforce have started to take control of counterinsurgency operations and Intel themselves. United Nations Assistance Mission for Afghanistan, via a tweet, stated that lives and security of civilian population cannot be compromised by either side whatsoever and an independent inquiry of the incident is underway.

“It was a disaster. Blood Everywhere,” a Witness Reports

No. of civilian causalities has substantially increased over the years, particularly in the airstrikes. In 2015, a NATO-led airstrike over a hospital in the same province of Kunduz killed 42 people. Almost all of them were either patients or medical staff. Similarly, earlier this month, a unit of the Afghan security and intelligence forces carried out a deadly raid in two villages in the Chaparhar district of Nangarhar province, that resulted in the death of seven farmers including two teenagers.

Afghan officials maintained that the people killed in the attack were Taliban fighters. Collateral damage, the euphemism used for civilian or friendly deaths, has been a major cause of resentment on part of the general Afghan population against the foreign troops and Ghani administration.

Given the seriousness of humanitarian crisis as a result of current air strikes, the silence on part of international mainstream media is doleful. Al-Jazeera, BBC and Daily Mail are the only  major news outlets to have covered the story. The event went unnoticed with almost zero coverage from international, especially US media, allowing the insurgents to use anti-US narrative for their benefit.

Read more: Pentagon hides data on how much Taliban controls in Afghanistan

The fact that the strikes led to the death of a high profile Afghan Taliban leader would have been portrayed with much more vigour and Pakistan would have been, once again, bashed for sheltering Taliban if it were not the young children killed in the process. It is a general understanding that non-combatants especially children and women will not be targeted during the war. But the death of scores of children aged 10-15, went unnoticed in the western media, raising questions about the agenda being followed instead of neutral journalism.

No Justification Possible for Killing Children

No matter how valued the target was, ethically there is no justification for killing young children and civilians anywhere, as stated by UN Assistance Mission for Afghanistan also. It is the time like these when antipathy in the minds of public living in Afghanistan grows against American double standards. The war in Afghanistan has entered into the 16th year with no end in sight. The suffering on the broader scale has been borne by common people of Afghanistan. The issue has caused rage over social media by internet users from all over the world terming it as “criminal silence” on part of media. Mothers are wailing and crying outside the hospitals, for the death of their children, and everyone is crying with them.

Read more: Taliban and IS creating chaos in Kabul

There are pictures of innocent children with garlands and turbans, apparently the ones present in the madrassa at the time of the strike, being circulated over twitter with the caption, “IamNotTerrorist”. Overall criticism is that had it been children targeted by militants, the US media would have been running marathon transmissions.

In the age of information revolution, when suppressing news has become very difficult, incidents like these raise a question mark over the credibility of news outlets, making people question even the authentic news they break next.

TTP leader, involved in APS attack of 2014, killed in Afghanistan