Supporters of volatile Iraqi cleric Moqtada Sadr prepared on Friday for a "million-strong" march in Baghdad to demand the ouster of US troops, putting the protest-hit capital on edge. 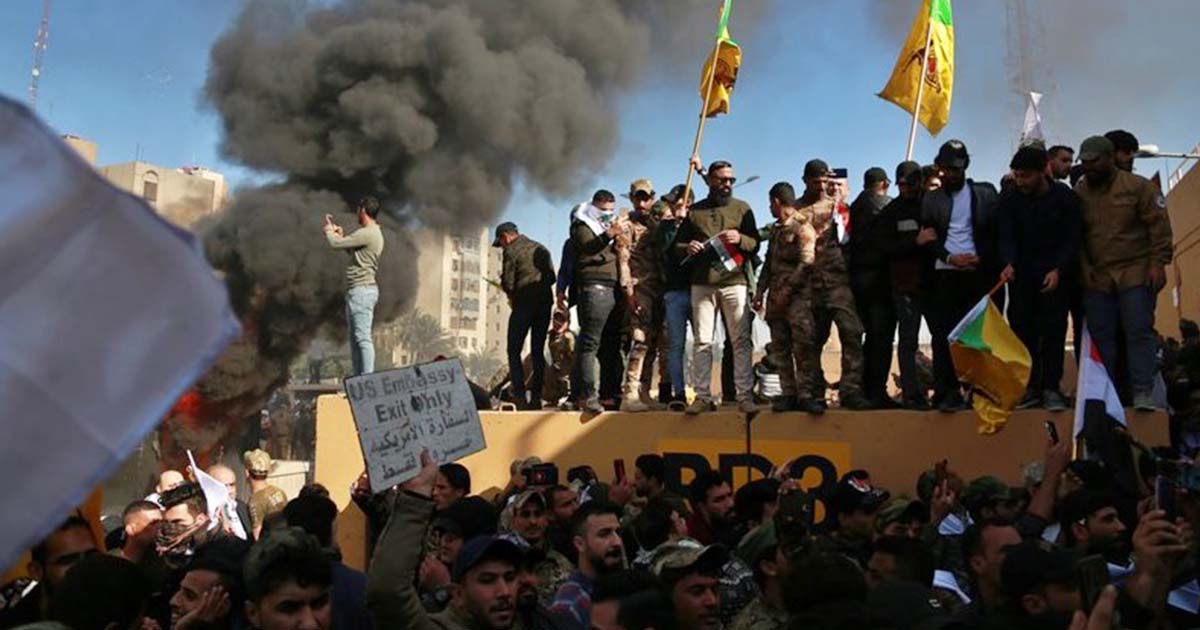 Supporters of volatile Iraqi cleric Moqtada Sadr prepared on Friday for a “million-strong” march in Baghdad to demand the ouster of US troops, putting the protest-hit capital on edge.

The march has rattled the separate, months-old protest movement that has rocked the capital and Shiite-majority south, where young Iraqis have demanded a government overhaul, early parliamentary elections and more accountability.

After defying violence that has left 470 people dead as well as a spree of kidnappings and intimidations, those protesters fear their cause could be eclipsed by Sadr’s powerplay.

“Sadr doesn’t represent us,” one teenager said defiantly late Thursday on a blocked-off thoroughfare in Baghdad.

The scale of Friday’s anti-U.S. protest will be an important indicator of the combined influence of Sadr and Iran’s proxies, but it is imperative to distinguish between new anti-US protests and the pre-existing popular protest movement.https://t.co/dlIkV4Bj8q https://t.co/ImULMetiBt— The Cavell Group (@TCG_CrisisRisks) January 23, 2020

America’s military presence in Iraq has become a hot-button issue in the country since a US drone strike killed Iranian general Qasem Soleimani and Iraqi commander Abu Mahdi al-Muhandis on January 3 outside Baghdad’s international airport.

Two days later, parliament voted for all foreign troops — including some 5,200 US forces — to leave their country.

Sadr, long opposed to US troops being in Iraq, decided to take that momentum to the street and called for “a million-strong, peaceful, unified demonstration to condemn the American presence and its violations”.

Several pro-Iran factions from the Hashed al-Shaabi military force, usually rivals of Sadr, have backed his call and pledged to take part on Friday.

Read more: ISIS might resurge if US leaves Iraq: US General warns

By late Thursday afternoon, new checkpoints cropped up across Baghdad aimed at securing the protest area.

In the shrine city of Karbala, south of Baghdad, large buses were seen picking up Sadr supporters to bring them to the capital for the rally.

To head off the anti-US gathering and ramp up pressure on authorities to enact reforms, young anti-government demonstrators shut down streets in Baghdad and across the south this week with burning tyres and metal barricades.

Protester Mariam said Friday’s rally would be “politicised by certain factions or sides”.

“We’re protesting in the people’s name. We’re free. We can’t demonstrate in the name of a particular party or sect,” she said.

#US embassy tightens the security measures around the complex ahead of anticipated anti-US protests that will take place tomorrow in #Baghdad. pic.twitter.com/OzNyGFvxxP— Barzan Sadiq (@BarzanSadiq) January 23, 2020

When Sadr announced plans for the rally last week, many feared he would hold it near Tahrir Square — the beating heart of the anti-government protests in Baghdad.

But his spokesman Saleh al-Obeidy said late Wednesday that they had chosen the neighbourhood of Jadiriyah, near Baghdad University, as the gathering place.

That, in turn, has sparked worry that angry crowds could attack the presidential palace or the high-security Green Zone, which houses the US embassy.

The move would not be without precedent for Sadr, who urged followers to storm the Green Zone in 2016 in a challenge to the government over undelivered reforms.

Sadr battled US forces with his Mehdi Army after the American-led invasion that toppled Saddam Hussein in 2003.

He later branded himself a reformist and backed the recent anti-government protests when they erupted in October.

Read more: Iraqi cleric Al-Sadr calls for protests against US forces in Iraq

At the same time he controls the largest bloc in parliament and his followers hold top ministerial positions. The 46-year-old is a notoriously fickle politician, known for switching alliances quickly.

“Some sides representing the October revolutionaries think Iran is solely responsible for Iraq’s ruin and others represented by the Hashed or its supporters say America is the source of ruin,” Obeidy said Wednesday.

“We believe that both are behind this ruin, and Sadr is trying to balance between the two.”

It remained unclear even until early Friday how many people would turn out for the rally and where they would march.

The call for the protests has been backed by both influential Shia cleric Muqtada al-Sadr and his erstwhile rivals in political movements, such as Kataib Hezbollah and Asaib Ahl al-Haq, which are backed by Iran https://t.co/6DK4kJ7vLJ

“On the one hand, (he seeks to) position himself as the leader of a reform movement, as a populist, as anti-establishment,” Hasan said.

“On the other hand, he also wants to sustain his image as the leader of the resistance to the ‘American occupation’,” partly to win favour with Iran, he added.

Tehran has insisted all American troops must leave the Middle East amid the skyrocketing tensions with Washington over recent weeks.

But Sadr may also have domestic motivations, Hasan said.

“This protest will show Sadr is still the one able to mobilise large groups of people in the streets — but it’s also possible he wants other groups to respond by giving him more space to choose the prime minister.”

Premier Adel Abdel Mahdi resigned in December under pressure from protests and Iraq’s Shiite religious authority, but he remains caretaker prime minister, as political parties have failed to name a successor.

The Palestinian tycoon who sued Britain over 1917 declaration