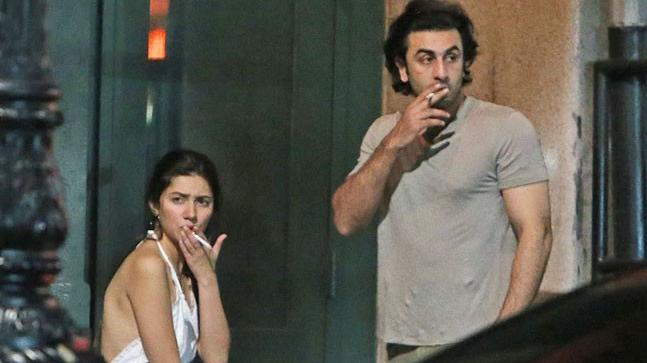 Mahira Khan landed in hot waters after another video of her, smoking during an event, surfaced online. The actress was filmed smoking, for the second time, since her previous controversy in which the actress was snapped smoking with an Indian actor Ranbir Kapoor in New York last year.

The video, from an event, that surfaced online has stirred criticism from a selected group of people on social media that are deeming Mahira Khan’s smoking a “violation” of norms and values in Pakistan. They believe being a Pakistani actress she must not smoke.

As opposed to her previous ‘smoking’ controversy that garnered collective disapproval from the people, this time many stood in her defense. Many of her followers came in large number to support and defend the actress saying it is her freedom to determine how she wants to live.

The actress is seen in the video trying to hide it as soon as she realized she was being filmed.

Mahira Khan has not responded to the controversy yet but her followers expect a statement from her.

Mahira Khan in her latest interview with BBC ‘HardTalk’ expressed how she felt ‘violated’ when images of her sharing a cigarette with an Indian actor Ranbir Kapoor surfaced online.

Her pictures certainly surprised her followers that were followed by an onslaught of criticism on the actress. Mahira Khan said it was the first time ever she was embroiled in the controversy.

“That was the first time in my entire career that I was caught up in a so-called controversy and it was strange because there were so many things in that. One, obviously you feel violated, you are in a personal downtime moment and someone has just photographed you.

“Two, obviously there was an uproar because here I was, someone who is extremely loved in Pakistan, and they sort of keep me up on this pedestal you know, they treat me with a lot of love and a lot of respect. And there are certain things I didn’t realize that they don’t want to see me do.”

“At that point yes, it was crazy honestly because it lasted for a while… It was crazy, it was ridiculous.”

It seems Mahira Khan this time has paid no heed to the criticism.

Previous articleWhy so many in Pakistan are scared of “Brand Malala”?
Next article3 MNA’s leave PML-N after PM Abbasi remarks

24 July 2021
Previous articleWhy so many in Pakistan are scared of “Brand Malala”?
Next article3 MNA’s leave PML-N after PM Abbasi remarks

Should the national anthem of Pakistan be re-written in Urdu Language?