Is the ‘Pashtun Tahafuzz Movement’ being exploited? 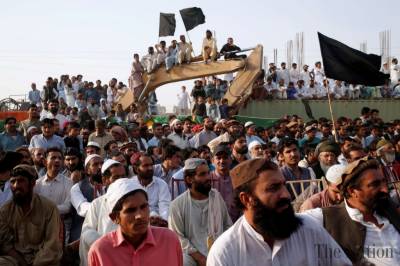 Interesting to see the emergence of PTM right before our elections and especially when Pakistan is under the constant USA pressure vis a vis the Taleban etc, an old mantra which has lost its credibility. The movement appears to be well funded and has been receiving social media support from the usual suspects, Husain Haqqani, Mazdaki (Mohammed Taqi), Raza Rumi, Marvi Sirmed, ostensibly under the facade of “free speech” and “Pashtun rights”.

However, in reality, they aim to push their “cold war” agenda of anti militarism, another dead dog, forward. While many of the PTM grievances may be valid such as the large number of security checkpoints, midnight knocks, being subjected to what are perceived as highly unnecessary restrictions. Yet unfortunately these are the ugly and harsh realities of the land which has seen war and violence for nearly 40 years.

Lest we forget, post 9/11, even the world’s “most vibrant democracy”, the USA, has behaved worse than a Nazi fascist state in treating its own citizens and still does. As have others when they felt their security threatened. I fully sympathize and empathize with those who suffer from the high handedness of the State. Only someone who undergoes the pain and the indignities can understand what it feels being the victim of extremely harsh security measures. As do the youth of FATA.

Running the risk of being dubbed a conspiracy theorist, it does appears that the PTM, in some of its highly inflammable rhetoric, advocates what the USA, Afghans and Indians have been saying about Pakistan and the Pakistan Army.

Pakistan has been through civil wars, extreme violence and militancy in FATA and Balochistan. Unfortunately and as a consequence the landscape is not just physically scarred but also emotionally and intellectually, scarred on all sides. Every shadow is a potential terrorist, a suicide bomber. And then of course great power has the potential of being misused. Clearly no one wants to live in an environment of constant surveillance, security checks, and nor does anyone wants to be being treated as possible criminals or terrorists?

But this is the unfortunate, tragic and sad part of our reality, and while I fully support every effort to normalize the lives of every citizen in our country and for the removal of this very harsh security blanket, we must also understand the rationale. Several years ago, I remember coming from Dubai to Lahore, and just because my driver had a very long beard and wasn’t carrying his original identity card, we were stopped for three hours till his brother brought his genuine ID card! This occurred despite my ex-military credentials.

Read more: Pakistanis wake up before you are sold…

While this is nothing compared to the many indignities people in FATA or Quetta or other parts suffer, it manifests the paranoia of the State and their own insecurities and experiences where seemingly innocent people wreaked havoc!

Only with time and peace will the situation cool down. The journey has only started.

But what for me is seriously questionable and extremely dangerous for Pakistan, is how the PTM has clearly being hijacked by anti State and anti Army elements, using the genuine grievances of the people. What is also not clear is what this movement wants to achieve other than abusing the army, shouting platitudes about freedom and “our rights”. There’s clearly much more to this movement than what meets the eye.

The movement appears to be well funded and has been receiving social media support from the usual suspects, Husain Haqqani, Mazdaki (Mohammed Taqi), Raza Rumi, Marvi Sirmed, ostensibly under the facade of “free speech” and “Pashtun rights”.

Running the risk of being dubbed a conspiracy theorist, it does appears that the PTM, in some of its highly inflammable rhetoric, advocates what the USA, Afghans and Indians have been saying about Pakistan and the Pakistan Army. It seems to me that it also offers them the perfect opportunity, to create dissension in Fata and KPK, and to bring pressure on Pakistan and the Army. Also not far behind are the possibilities that perhaps the local politics might also be fueling this.

Read more: The good people of Pakistan! Making a difference!

Nawaz Sharif, ANP and the likes of  Mahmood Achakzai have a lot to gain by the PTM stance of constantly abusing and attacking the Army and the State. While one sympathizes with any beleaguered community, especially the residents of FATA for the hell they have endured and supports them for highlighting and complaining against high handedness by the state, which is every citizen’s right, however only if it is within the bounds of the prevailing law. Manzoor Pashteen must be careful that the genuine cause of the movement does not turn into an Army and State bashing exercise, hijacked by our enemies!

All the current signs tell me that it is turning into something sinister. But I could be wrong!

For one, the language used against the Army gives them away!

Secondly I’m very wary when certain types of people begin to endorse any movement in Pakistan.

The final giveaway will be an International Conference!

Previous articleNuclear Power: Bridging the energy gap
Next articleWill Motorcycle Girl be the next success after ‘Cake’?

23 June 2021
Previous articleNuclear Power: Bridging the energy gap
Next articleWill Motorcycle Girl be the next success after ‘Cake’?

The winners and losers in Trump’s Afghan strategy – II

The Moscow-Islamabad ties: A fling or a marriage?