Is Trump the most amicable US President Putin will ever see? 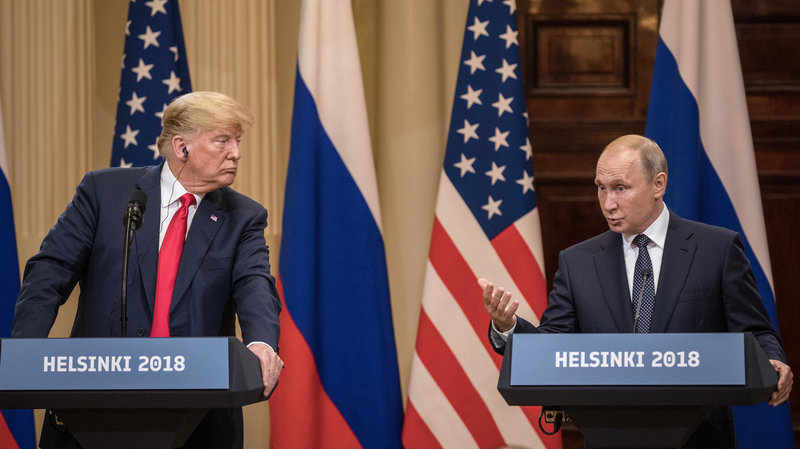 A fortnight after sacking Rex Tillerson as Secretary of State and a week after kicking out Lt. General HR McMaster from the National Security Council in the White House, President Donald Trump has made his first major foreign policy move. He announced on Thursday in front of cheering supporters at a rally in Richfield, Ohio, “We’ll be coming out of Syria, like, very soon. Let the other people take care of it now. By the way, we’re knocking the hell out of ISIS. We’re going to be coming out of there real soon. We’re going to get back to our country, where we belong, where we want to be.”

In sheer power play, Trump has shattered the coalition between the US foreign and defence establishments, which Tillerson and Defence Secretary James Mattis assiduously built to usurp policymaking. Trump made his announcement on Thursday without consulting the state department or Pentagon. The state department spokesperson admitted ignorance. The Pentagon spokesperson mumbled that “important work remains to guarantee the lasting defeat of these violent extremists” in Syria.

Both leaders agreed on the importance of dismantling Russia’s spy networks in the United Kingdom and the United States to curtail Russian clandestine activities and prevent future chemical weapons attacks on either country’s soil.

But, on Friday, the White House chief of staff John Kelly in a phone call to Deputy Secretary of State John Sullivan conveyed Trump’s decision ordering a hold on more than $200 million in recovery funds earmarked for infrastructure projects in northeastern Syria in territories under US military control. This freezes a pledge made by Tillerson in support of Pentagon’s plans for an open-ended military presence in Syria.

Trump’s move may gain traction with 2 American soldiers reportedly killed and four injured in an IED explosion near Manjib on Thursday. Mattis won’t undermine Trump’s decision. That is simply not the military man’s style, which is always to use “front men” (like Tillerson.)

John Bolton, McMaster’s replacement, isn’t a military man. Bolton has a terrible reputation in the Beltway, which will sap his effectiveness. But Bolton is a rank opportunist who’ll know what is good for him under a Boss who is moody and volatile in turns. Also, Mike Pompeo, the incoming secretary of state, is a close pal of Trump’s and there is no daylight possible between the two.

Thus, Trump’s foreign policy agenda is becoming “kinetic”, finally. The speech in Ohio is vintage Trump. He has returned to his golden theme of mending America’s decaying infrastructure “with American heart, and American hands, and American grit.” (White House readout) This is also Trump’s campaign plank in the 2020 election: No more wars abroad unless US interests are directly threatened.

The state department spokesperson admitted ignorance. The Pentagon spokesperson mumbled that “important work remains to guarantee the lasting defeat of these violent extremists” in Syria.

My gut instinct says that an overall easing of tensions with Russia is also to be expected. Trump is not seeking a fight with Russia. Arguably, he is the most peace-loving American president Vladimir Putin will ever know. The exact circumstances of the Skripal spy case will never be known but following a phone call Trump made to British PM Theresa May on March 28, some sort of a cooling off period may have begun. The White House readout said,

Both leaders agreed on the importance of dismantling Russia’s spy networks in the United Kingdom and the United States to curtail Russian clandestine activities and prevent future chemical weapons attacks on either country’s soil. The above formulation by no means constitutes an “anti-Russian” articulation. Rather, it is a statement on national security priorities.

Hasn’t Britain begun “soft-pedaling” already? Contrary to the gloomy news Wednesday that the chances of Yulia Skripal, the ex-spy’s daughter, surviving was only 1 percent, London announced on Friday that she is “out of danger”, is eating and drinking. And Skripal himself, though “critical”, is “stable”.

Trump’s move may gain traction with 2 American soldiers reportedly killed and four injured in an IED explosion near Manjib on Thursday. Mattis won’t undermine Trump’s decision. That is simply not the military man’s style, which is always to use “front men”

Equally, British FO said on Saturday, “We are considering requests for consular access in line with our obligations under international and domestic law, including the rights and wishes of Yulia Skripal.” The Russian embassy has sought consular access. (Yulia is a Russian citizen.) Moscow must be sensing new stirrings in the air. The latest remarks by the Russian ambassador to the US Anatoly Antonov were spoken more in sorrow than in anger. Antonov said on Saturday,

Read more: Is the Chinese Yuan behind Trump’s anger at Pakistan?

“We want everybody to understand that we (US and Russia) are destined to become friends again. Only close interaction between our countries can help maintain international strategic stability and find mutually beneficial solutions to global and regional challenges.” “Relations between ordinary people shouldn’t suffer. We’ll do everything in our capacity to make sure that Americans have zero problems with trips to Russia.” Winston Churchill once compared Russian politics to a “dogfight under a carpet”. That is an apt description of Trump-era Russian-American spats as well.