As opposed to the reports published in media, the capital's administration has denied that it has signed an agreement with the Lal Masjid's cleric. However, if the reports are correct then the question arises if the government setting a bad precedent while dealing ‘peacefully’ with those challenging the writ of the state? 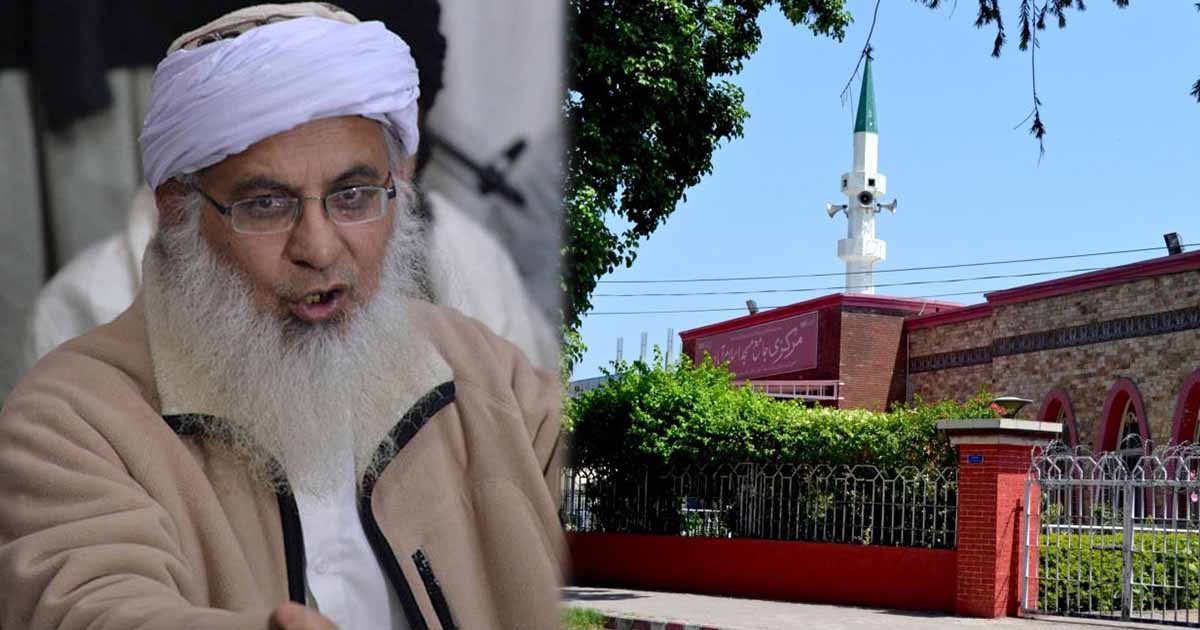 The Islamabad administration has denied that it has agreed
to allocate a 20-Kanal plot for the establishment of Jamia Hafsa in return for the firebrand Khateeb of the Lal Masjid Maulana Abdul Aziz withdrawal from the mosque.

While refuting a story published in Pakistan’s leading English daily Dawn, which suggested that Maulana has agreed to leave Lal Masjid after authorities promised him 20 Kanals of land for Jamia Hafsa, the Deputy Commissioner Islamabad Muhammad Hamza Shafqaat said that it was “Not true.”

In a tweet, the capital’s deputy commissioner stated: “Not true. We have not made any such offer. There must be some misunderstanding”.

Not true. We have not made any such offer. There must be some misunderstanding https://t.co/NfEno2UPXU

In Dawn’s story, it was stated that the capital’s administration and Maulana Aziz finally reached an agreement on Sunday to end the stalemate after the administration agreed to allocate the cleric a 20-Kanal plot for the establishment of Jamia Hafsa in return for his withdrawal from the mosque.

For many analysts, the government has once again surrendered before a cleric who was using female students as a shield. The trend, using women as a human shield to compel the state to agree on one’s extra-legal demands, may create some serious security-related challenges for the state in the long run.

Some other media reports also suggested that both sides reached an agreement and, as a result of it, the police force deployed around the mosque was withdrawn and the female students inside the seminary left the premises.

“The government has agreed not to evict me from #LalMasjid forcefully, and I’ll be leading prayers here,” Maulana Abdul Aziz tells @arabnewspk. Apparently, the PTI govt has bowed down to demands of radical Islamist. #Extremismhttps://t.co/ER6j7wixTI

The firebrand cleric had been occupying, claiming to be the rightful prayer leader despite a ban on his entry in the premises. The capital administration had issued a notification of his removal last year, but it had failed to appoint a new prayer leader, paving the way for the cleric to enter the mosque when the administration was busy dealing with other issues.

Any ideas what those issues may be?
Farce.
https://t.co/cqwJ8OBIIL

As both sides refused to relent, the Islamabad police had surrounded the mosque to deal with any untoward situation. The police had also barred unidentified people from entering the mosque, with an exception made on Friday.

During the phase of negotiations, Aziz said that he had started a “movement” against former president Pervez Musharraf because mosques in the federal capital were being demolished and now such incidents have resumed once again.

In response to the cleric’s complaint, the authorities assured him that they will take his grievances to the competent authorities and they will also consider his demand for a settlement in light of the Supreme Court’s (SC) decision in this regard.

The agreement came after the reports that the admin wasn’t ready to implement the cleric’s demands because he wanted to become the khateeb of the mosque again. The official had also said that he wanted a large piece of land for the establishment of the seminary along with the possession of the plot adjacent to the old children’s library and Rs250 million.

It is worth noting that back in 2019, the Supreme Court wrapped up the Lal Masjid suo motu case after government’s assurance of awarding land for Jamia Hafsa. A two-member bench led by Justice Gulzar Ahmed, now Chief Justice of Pakistan, conducted the hearing and wrapped up the case after the government assured it would award land for the construction of the varsity.

The Attorney General (AG) submitting a sealed report pertaining to Lal Masjid and Hafsa varsity stating the report was sealed owing to the sensitivity of the issue. Justice Yahya Afridi replied that parties have a right to see the report and there exists no law for submission of sealed reports.

Justice Gulzar asked if the plot would be awarded to the varsity to which the AG replied that a 200-yard plot for construction of the varsity will be awarded. According to the previous SC order, Jamia Hafsa will be a state-owned entity.

Furthermore, Maulana Aziz remained khateeb of Lal Masjid from 1998 to 2004. He was arrested during the Lal Masjid operation in 2007. Later, Maulana Abdul Ghaffar was appointed as the khateeb and Amir Siddiqui the naib khateeb on a temporary basis.

#Lal Masjid Khateeb Maulana Abdul Aziz has been removed and his entry banned in mosque for three months.

The capital administration has removed the khateeb of Lal Masjid and imposed a three-month ban on the entry of former khateeb Maulana Abdul Aziz in the mosque. pic.twitter.com/50wd6E6TYm

In 2009, Maulana Ghaffar had left the mosque after the release of Maulana Aziz and the latter had started leading prayers in Lal Masjid till 2014 when a ban was imposed on him. Amir Siddiqui had then led prayers and three months ago was appointed the mosque’s khateeb. An official of the capital administration had acknowledged that there was no khateeb or naib khateeb at Lal Masjid after Amir Siddique was transferred two months ago.

It is worth mentioning here that the PTI’s government signed an agreement with Tehreek-i-Labbaik Pakistan (TLP), a right wing extremist religious party, in 2018.  The agreement was signed by Dr Noorul Haq Qadri (religious affairs minister) and Raja Basharat (law minister Punjab) on behalf of the government, and by Pir Muhammad Afzal Qadri (former senior leader of the TLP) and Muhammad Waheed Noor (central chief nazim of the TLP). After the agreement, the TLP called off the protest.

Political commentators and experts suggest the state to take a firm position to deal with those who attempt to challenge the writ of the state. The state must ensure its supremacy under any circumstances in order to maintain its claim of being sovereign, advise analysts.

HSY to mentor ‘24’ future leaders in his ‘Musafir’ Campaign