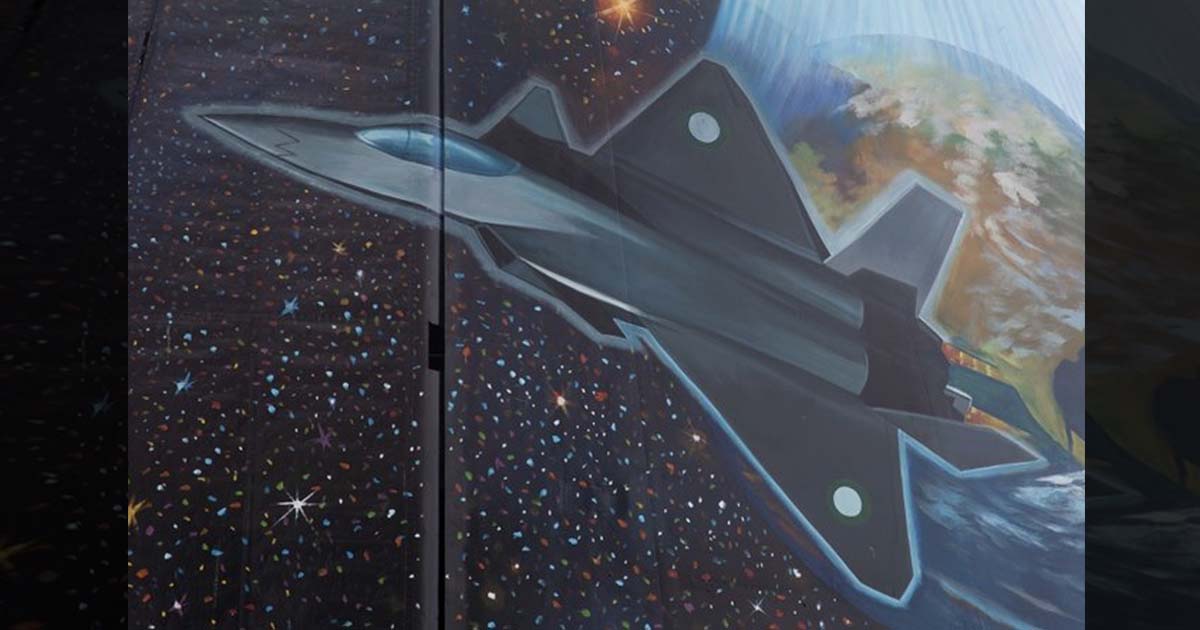 Pakistan Air Force was forged in the inferno of 1965 and 1971 while battling against a much larger and better-equipped force, India Air Force. While it was operational for long yet its organizational growth took a turn during the Soviet-Afghan war when the PAF was engaged in combat against the Soviet Air Force and its Communist Afghan allies.

Pakistan Air Force did not or “could not” perform well in the battle for Kargil because of the lack of Beyond the Visual Range (BVR) technology which India highly invested in and took advantage of. The seriousness of technological lack for Pakistan and skills for India can be determined by the fact that India, in all of Kargil war, lost only two planes, and Pakistan had shot down none.

One of the Pakistan Air Force (PAF's) C-130B, participating in RIAT 2019 Tail Art displays PAC's (possible) concept/design for the FGFA under project "AZM". A Dual Engine 5th Generation Aircraft concept/design of Canard Delta can be seen.

The scenario changed after 9/11 when suddenly The US needed Pakistan to fight a war “against terrorism” in Afghanistan. Sanctioned imposed on PAF were lifted and new treaties for improving the force were signed. This opened up a gate for the PAF leadership to develop the old and acquire new technology for Pakistan.

At that time Pakistan first signed an agreement with China for the production of JF-17 Thunder.

Pakistan is among some countries that successfully launched a fourth-generation warfare program. Pakistan successfully produced JF-17 Thunder when Israel’s Lavi program and India’s Tejas Program failed miserably and died on tables. Now when Pakistan is done with its “Fourth Gen Fighter Program” with the new JF-17 Thunder Block III, a deadly fighter in the air, Pakistan eyes a joint Fifth Gen Fighter Program with China.

Looking at its budget, Pakistan will probably be going for a lightweight and low-cost platform – similar to America’s F-35 and China’s J-31. Its still a feat for Pakistan, a country with just $280 billion GDP, going for the fifth generation warfare as only 3 countries in the world previously are working on them i.e. The US, China & Russia while Japan managed to only produce a prototype and Turkey and South Korea have been stalling their program for years.

Pakistan has started with its fifth-gen fighter program with a project called “Azm”. Pakistan Air Force showcased the conceptual design of its future stealth aircraft on the tail of the PAF C-130 at the Royal International Air Tattoo (RIAT) 2019.

As per the yearbook of the Pakistan Ministry of Defence Production (MoDP) for the year 2017-2018, the Aviation Research, Innovation and Development (AvRID) Secretariat has finalized the first of the four conceptual design stage cycles for the development of the Pakistan Air Force’s Fifth-Generation Fighter Aircraft (FGFA) program.

Pakistan’s entry into the fifth-generation fighter league is a significant step for the country’s prestige and demonstrates both the potency of its indigenous defense industries and the value of Chinese technological assistance.

The Pakistan Air Force is here with this special scheme Herc from No. 6 sqn. Fourth year running for the PAF at the show.#riat #AirTattoo #RIAT2019 pic.twitter.com/mOxgynajJn

“Pakistan is engaged with Chinese experts in manufacturing the next-generation aircraft. China is also providing technical assistance for launching the satellite program” Pakistan’s former Air Chief spoke at AirTech 2017. The former Air Chief was referring to the Project Azm that is expected to significantly expand the country’s air combat compatibility and its aviation industry.

This project not only strengthens the Pakistan Air Force’s capabilities but also grants Pakistan increased independence from the United States and its aviation companies amid growing tensions between both the countries and in the region.

Pakistan’s aims are ambitious with Project Azm, trying to build a Fifth Gen Fighter Jet by 2022, but with the help of the Chinese defense sector and technological assistance, it might be possible.

Project Azm was formally initiated by the PAF back in July 2017, and its agenda is to develop an FGFA, a medium-altitude, and long-endurance (MALE), new munitions, unmanned aerial vehicle (UAV), and multiple other projects.

A recently conducted interview with the Pakistan Air Force Chief of Air Staff (CAS), Air Chief Marshal Mujahid Anwar Khan revealed that he does not expect the 5th generation fighter aircraft to make its maiden flight for “another decade”.

Analysts believe that the PAF intends to design a platform that is optimized for offensive counter-air (OCA), maritime, and deep-strike platforms, making it the next-in-line of the F-16A/B Block 15s and the Mirage III/5.

Defense analyst Shahid Raza observed, “If my calculations are correct, the aircraft we’ll see being developed under Project Azm 2030 will be a clean-sheet design, built around a SINGLE advanced derivative of the WS-15 class engine. It’ll have low observable characteristics and PAF defined specifications.”