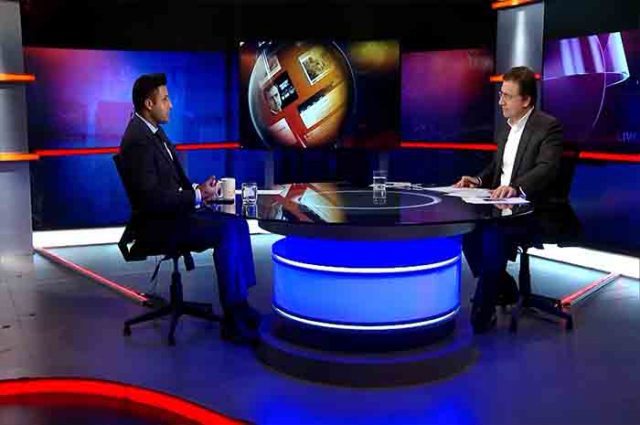 The Spceial Assistant also took a jibe at the leader of Punjab Assembly’s opposition Hamza Shehbaz “Hamza Shehbaz has been on the exit control list for only two days and he can’t cope with it”. Zulfi Bukhari made these statements while speaking to Doctor Moeed Pirzada on his prime-time show “Live With Moeed Pirzada” at GNN.

He also said that during the previous regimes, British Airways did not feel secure “British Airways had been longing to come back to Pakistan for the past ten years. England has now seen opportunity in Pakistan under the premiership of Imran Khan. While responding to the claim of Ahsan Iqbal, the former interior minister, about “the credit of bringing British Airways” he said that he had never taken sole credit “It was also due to the efforts of Pakistan Army and Abdul Razzaq Dawood”.

Bukhari took another jibe at the former interior minister “Today we inaugurated the Visa centre for Qatar and I was anxious to think that Ahsan Iqbal may pick a picture and claim that it had been planned by them 10 years ago” the Special Assistant said. The Supreme Court dismissed on Wednesday a petition seeking disqualification of PM’s Special Assistant Zulfi Bukhari.

Special Assistant to Prime Minister of Pakistan on Overseas Pakistanis, Zulfi Bukhari said that he has been fighting cases against him for the past seven months in courts.

Chief Justice Saqib Nisar remarked that Bukhari does not have any administrative powers. “He doesn’t have any constitutional position.” He is a special assistant and not a minister. “If he mis-uses his authority, then we will see,” the CJP had remarked. It is pertinent to mention here that the court, in its December 15 verdict, had declared that persons with dual nationality could not retain important government positions, as they should choose between a government job and a foreign nationality.

“In my case the whole petition has been dismissed by the Supreme Court not only the dual nationality case but some newspapers have written that my status has been changed” said the special assistant. Talking about challenges of overseas Pakistanis Zulfi Bukhari claimed that the judgement of Chief Justice about the dual citizenship case was pro-dual citizenship but many newspapers misinterpreted it.

“If you do not accept dual nationals in Pakistan then how can we demand donations from them.” Bukhari further added. Bukhari and Razaq Dawood had told British Ambassador to strengthen bilateral ties of Pakistan and UK by increasing cricket exchanges and re-starting airways operations.

India, not Pakistan, is US strategic ally: Pakistan Foreign Minister