The United Kingdom has asked China to rethink its strategy over Hong Kong, also warning China that its moves on Hong Kong are effectively putting the Sino-British Joint Declaration in danger. This is another chapter in the ongoing feud between China and the West over Hong Kong, with both sides playing zero-sum games. 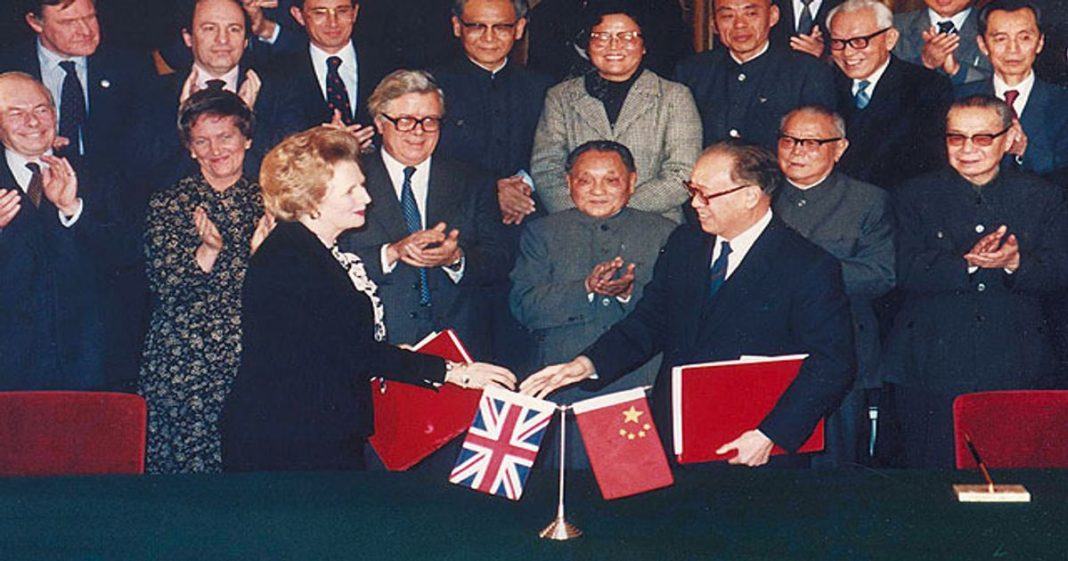 In a statement that echoes the tensions of Western nations amid China’s clampdown on Hong Kong, the UK on Thursday called on China to “re-consider” and “step back from the brink” over the crisis in Hong Kong. It has advised China to rethink its strategy, as its move are putting the Sino-British Joint Declaration in danger. The cautioning from the United Kingdom comes amid a heated feud between Washington and Beijing over the city’s freedoms. The city-state has become a battleground and somewhat of a proxy for the ongoing escalation in tensions between the United States and the Democratic People’s Republic of China. Tempers on both sides of the rift are running short, and the mudslinging is in full flow.

In a statement to parliament, Foreign Secretary Dominic Raab said Hong Kong’s success was built on its autonomy and freedoms, and that China itself has long affirmed the One Country, Two Systems approach.

“The UK, through successive governments, has consistently respected and supported that model, as reflected both in China’s Basic Law and also the Joint Declaration,” Raab said.

The Joint Declaration is a UK-China treaty registered with the UN, which was part of the handover of Hong Kong to China in 1984.

“This proposed national security law undermines the ‘One Country, Two Systems’ framework that I have described, under which Hong Kong is guaranteed a high degree of autonomy with executive, legislative and independent judicial powers,” Raab said.

“To be very clear and specific about this, the imposition of national security legislation on Hong Kong by the government in Beijing, rather than through Hong Kong’s own institutions, lies in direct conflict with Article 23 of China’s own Basic Law. And it lies in direct conflict with China’s international obligations freely assumed under the Joint Declaration,” he added.

China's proposed national security law for Hong Kong is in direct conflict with its obligations under the Joint Declaration. If enacted, this law would violate Hong Kong’s autonomy and freedoms. UK and 🇺🇸🇦🇺🇨🇦 are deeply concerned.
https://t.co/bbGgJgHklw pic.twitter.com/e7eQySFDFX

Raab said the proposed national security law raises the prospect of prosecuting Hong Kongers for political crimes, undermining their rights and freedoms as set out in the Joint Declaration.

With regards to the UK approach, he said Britain strongly opposes the “authoritarian law” being imposed by China in breach of international law.

Raab said the UK will allow British nationals (overseas) to come to the UK and study and work for extendable periods of 12 months, giving them a path to citizenship.

Raab concluded his statement reaffirming the UK’s historic links with Hong Kong: “We, as the United Kingdom, have historic responsibilities, a duty I would say, to the people of Hong Kong.”

“I sincerely hope China will reconsider its approach,” he said. “But if not, the UK will not just look the other way when it comes to the people of Hong Kong. We will stand by them, we will live up to our responsibilities.”

Britain among Western nations calling for UN review of law

Earlier, Britain was among a group of Western nations comprising of itself, The United States, Canada and Australia which led criticism of the planned law, to punish secession, subversion of state power, terrorism and acts that endanger national security, as well as allow Chinese security agencies to operate openly in Hong Kong.

The U.S. called for a virtual meeting of the UNSC in the wake of the PRC's decision to undermine Hong Kong’s autonomy & freedoms guaranteed under the 1984 Sino-British Joint Declaration, a legally binding treaty registered w/ the @UN.

In reply, China accused the US of taking the UN hostage on Friday over a controversial security law for Hong Kong and warned Western nations to stay out of its internal affairs. Recent developments have shown that China is angry at the UN ‘interfering’ in its internal matter.

What is the Joint Declaration?

It is pertinent to discuss exactly what the Joint Declaration is to fully understand the gravity of the situation, and the seriousness of British complaints.

The Sino-British Joint Declaration is an agreement signed by Britain and China in 1984 to settle the future of Hong Kong. The two governments agreed China would reassume control of Hong Kong, which was occupied by Britain after the Opium War in 1840, from July 1, 1997.

The main body of the treaty has eight articles and three annexes. It states that China’s basic policies regarding Hong Kong which “will remain unchanged for 50 years”, including the promise that the city would retain a high degree of autonomy. The basic policies are detailed in Annex I and stipulated in the Basic Law, the city’s mini-constitution that was put into effect by the National People’s Congress in 1990. The declaration also states that Hong Kong’s legal and judicial system would also be unchanged for 50 years after 1997. It held that Britain would be would be responsible for the administration of Hong Kong until 1997 and the Chinese government would give its cooperation. The declaration was later deposited with the United Nations.