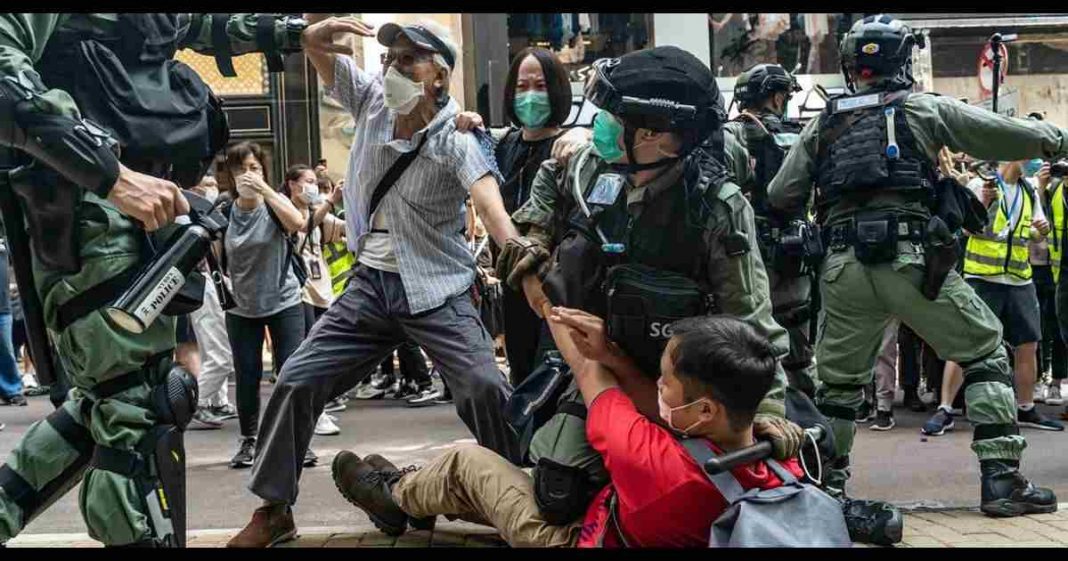 The vote by the rubber-stamp National People’s Congress came hours after the United States revoked the special status conferred on Hong Kong, paving the way for the territory to be stripped of trading and economic privileges.

What does the New security law in Hong Kong entail?

China made clear it wanted the legislation passed after Hong Kong was rocked by seven months of massive and sometimes violent pro-democracy protests last year.

An initial bid to enact such legislation in 2003 was shelved after half a million people took to the streets in protest.

The new law would punish secession, subversion of state power, terrorism and acts that endanger national security, as well as allow mainland security agencies to operate openly in Hong Kong.

On Thursday, the final day of the congress, delegates endorsed plans for the law, with a higher body now tasked with formulating the specific legislation.

“More than 20 years after Hong Kong’s return (to China) relevant laws are yet to materialise due to the sabotage and obstruction by those trying to sow trouble in Hong Kong and China at large, as well as external hostile forces,” Wang said.

US moves to cut ties with Hong Kong amid new law

Under a law passed last year by Congress aimed at supporting Hong Kong’s pro-democracy movement, the US administration must certify that Hong Kong still enjoys the freedoms promised by Beijing when it negotiated with Britain to take back the colony.

The US certifies that Hong Kong is no longer autonomous from China, jeopardizing billions of dollars in trade https://t.co/sQEMTkHqjF— CNN Breaking News (@cnnbrk) May 27, 2020

Washington’s decision on Wednesday that Hong Kong does not enjoy those freedoms means it could lose trading privileges — including lower tariffs than the mainland — with the world’s largest economy.

“The steps will be considered and they will be as targeted as possible to change behaviour,” Stilwell told reporters, while acknowledging it was unlikely Beijing would change course.

He said the United States did not want to hurt the people of Hong Kong, adding: “This decision was made by the government in Beijing, and not by the US.”

China not honouring prior agreements with Britain: Pompeo

US Secretary of State Mike Pompeo said the status had been withdrawn because China was no longer honouring its handover agreement with Britain to allow Hong Kong a high level of autonomy.

“No reasonable person can assert today that Hong Kong maintains a high degree of autonomy from China, given facts on the ground,” Pompeo said.

Disrespecting Chinese National Anthem to land one in jail

Washington’s move came after fresh protests broke out in Hong Kong on Wednesday — this time over another controversial proposed law that criminalises insults to the national anthem with up to three years in jail.

Police surrounded the city’s legislature where the bill was being debated, fired pepper ball rounds at protesters and arrested more than 300 people, mostly for unlawful assembly.

“It’s like a de facto curfew now,” Nathan Law, a prominent pro-democracy advocate, told AFP. “I think the government has to understand why people are really angry.”

Under the “one country, two systems” model agreed before the city’s return from Britain to China, Hong Kong is supposed to be guaranteed certain liberties until 2047 that are denied to those on the mainland.

The mini-constitution that has governed Hong Kong’s affairs since the handover obliges the territory’s authorities to enact national security laws.

But an effort to do so in 2003 was shelved after huge protests by Hong Kongers.

China is motivated by fear of a younger Hong Kong generation that “does not agree with the political system of the Communist Party,” said Hua Po, an independent political commentator based in Beijing.

“If they lose control over Hong Kong, the impact on the Chinese mainland will be huge,” Hua said.

Beijing has been infuriated by Hong Kongers — especially football fans — booing the national anthem to signal dissatisfaction with China.

New security law in Hong Kong: Is it the ‘end’?

“Many Hong Kongers must be as angry as us now, but we must remember not to give up,” she added.

Chris Patten, Hong Kong’s final British governor before the 1997 handover, said the proposal signalled a “comprehensive assault on the city’s autonomy” and would be “hugely damaging”.

Hong Kong has its own lawmaking body, the Legislative Council, or Legco. But at least two Hong Kong deputies to the NPC have said they would propose the idea of introducing the law without going through city’s legislature, using a mechanism provided for under the Basic Law.

“First, Beijing does not believe that security law can make it through HK’s Legco, at least not without a major political storm, and second, protests and dissent has made the legislation of this law more urgent.”

The end of #HongKong is alarming not only for its people but also for the world. Today's Hong Kong, tomorrow's the world: #HongKong has been the safe habour for dissent; it's the light, the conscience, the voice that speaks truth to an increasingly powerful China.— Maya Wang 王松莲 (@wang_maya) May 21, 2020

“#HongKong has been the safe harbour for dissent; it’s the light, the conscience, the voice that speaks truth to an increasingly powerful China,” she tweeted.

“It’s the end of Hong Kong. We know that they are cutting off our souls, taking away the values which we’ve always embraced, values like human rights, democracy, rule of law,” pro-democracy lawmaker Claudia Mo told AFP.