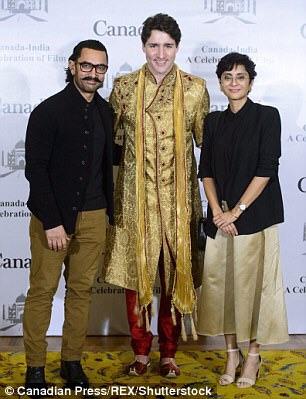 The Trudeau family were dressed in traditional India attire and graced the event in Mumbai last night. PM Trudeau adorn a golden sherwani, and his wife Sophie wore a cream-colored ‘sari’ at the event.

Later, Justin Trudeau in his tweet expressed his gratitude to his Bollywood host. The latter part of his tweet spoke of the possible stronger ties between Bollywood and Canadian entertainment industry in the near future.

Trudeau wrote: “Tonight, we celebrated stronger ties & new co-production opportunities between Bollywood and the Canadian Film Industry. And who better to help than @iamsrk himself… Great to meet you!”

Actor-director Farhan Akhtar too was delighted to meet Trudeau. He wrote: “Was an honor & a pleasure to meet the Hon. Prime Minister of Canada, @JustinTrudeau & his lovely wife, Sophie. Sir, your leadership in the discourse for ending gender discrimination serves as the constant inspiration to us all.”

Madhavan was floored by the “grace and charm” of the Canadian PM. “@JustinTrudeau such a pleasure and honor meeting you sir. Your relatability, grace, and charm were most endearing and it’s easy to see why you are the Pride and toast of Canada. Have a lovely rest of the tour,” he tweeted.

Justin Trudeau, however, is yet to receive a warm welcome from his counterpart Indian Prime Minister Narendra Modi and his cabinet members.

According to the international media PM Narendra Modi is known for giving hugs to his guests, and breaching the security protocols to receive his guests personally but did not appear to receive his counterpart from Canada. Instead, a junior Indian minister greeted the Canadian Prime Minister and his family when he arrived in New Delhi.

Read more: Olala! There is a reason why men hate Justin Trudeau

Narendra Modi did not even tweet a welcoming message to Trudeau in a move many are deeming disrespectful for Canadian Prime Minister. The plausible reason behind Modi and his minister’s restrictive behavior towards Canadian Prime Minister is Canada’s endorsement of a separatist movement, ‘Khalistan’ headed by Sikh community in India.

Scholar of Iran calling coronavirus ‘divine punishment’ got infected himself