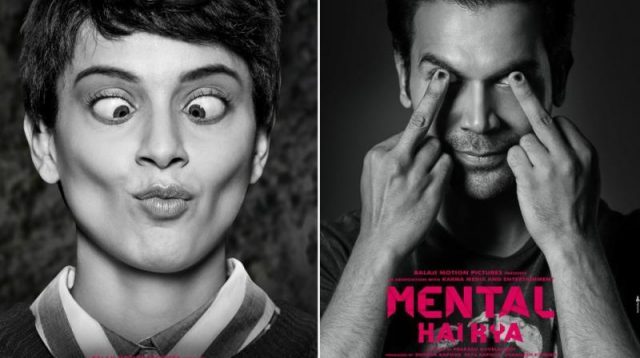 He captioned the picture: ‘”Crazy is the new normal. Mental Hai Kya with immensely talented Kangana Ranaut and my favorite (producer) Ekta Kapoor”.

Balaji Motion Pictures too shared the first look of the movie in a poster that features Kangana Ranaut and Raj Kumar Rao.

“Kangana Ranaut and Rajkummar Rao are killing it… quite literally!” the caption read.

As the title suggests the movie will be a comedy package for the viewers, as bold Kangana Ranaut is known for her comic roles in the Indian film industry. Raj Kumar Rao talking about his film mentioned that viewers can expect a different comedy in ‘Mental Hai Kya’.

“It’s an amazing script as it is very quirky and different comedy. Kangana is such a powerhouse performer and we are coming together after Queen along with Ekta Kapoor (producer) so it’s going to be a lot of fun.”

Both Raj Kumar Rao and Kangana Ranaut mostly feature in the character-oriented, low-budget movie that has a different storyline from the big-budget commercial movies.

Read more: Why is Kangana Ranaut refusing to sign the petition to protect…

Kangana Ranaut who made her debut with an intensive action-packed movie ‘Gangster’ have mastered in comedy in the recent years. Her powerful performances in movies like ‘Queen’, ‘Tanu Weds Manu’. ‘Rangoon’, ‘Tanu Weds Manu Returns’ and ‘Simran’ gained her the likes of critics and public on the box-office

Kangana Ranaut recently put an end to her years’ long fight with Karan Johar after the two exchanged unpleasant comments following her dig at Karan Johar on nepotism in the Indian Film Industry.