Pakistan has observed Kashmir Day since 1990 and under PM Khan Pakistan's resolve for Kashmir freedom is ever strong. Pakistan still holds that 'no country has the right to decide for Kashmir's freedom', its Kashmir's decision and only they should take it. Pakistan is celebrating Kashmir Solidarity Day with zeal. 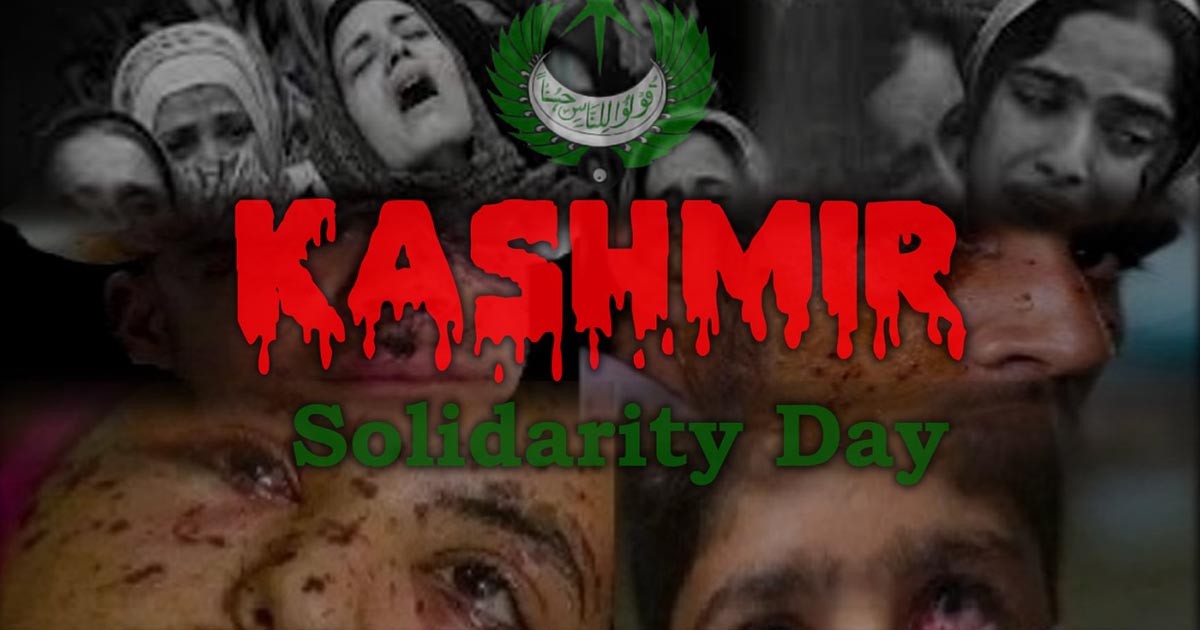 ‘No country has the right to decide the fate of Kashmir’ Pakistan has always stood firm by its demand for unconditional freedom for Kashmir. Pakistan has always condemned the illegal Indian occupation in the Kashmir and in its bid to highlight the Kashmiri plight worldwide, February 5 is observed as the “Day of Solidarity” with Kashmiri brethren.

Pakistanis, all across the world, will observe Kashmir Solidarity Day with full fervor and will express their solidarity with their Kashmiri brothers and sisters.

Today, we observe Kashmir Solidarity Day to reaffirm our unflinching support for Kashmiri brothers & sisters who have been subjected to an inhuman lockdown & communications blockade for six months now.

Pakistan’s President, Dr. Arif Alvi, reiterated Pakistan full and continued political, diplomatic and moral support for Kashmir cause. President reminded the people that Pakistan has fought and will keep on raising its voice for Kashmir at every possible international platform. He added that the international community has rejected India’s illegal annexation of Kashmir through Article 370 and 35A.

Pakistan observes a public holiday to commemorate the memories of Kashmir’s struggle. Prime Minister Imran Khan is set to address AJ&K legislative assembly and the joint session of Kashmir Council later in the day.

PM Khan stated that India has converted Kashmir into an open-air prison for millions of Kashmiris and made them prisoners in their own homes by revoking its autonomous status and pushing 900,000 troops inside Kashmir.

Khan further demanded Indian authorities lift the curfew and release tens of thousands of innocent Kashmiris who have been abducted and detained at undisclosed locations. “India stands before the world, exposed as a majoritarian and authoritarian polity, tramping upon the basic rights and freedoms of the Kashmiri people,” the PM Khan noted.

India has also banned international human rights organizations, international aid programs, and international journalists and media outlets to enter Kashmir. PM Khan urged the Indian government to allow these bodies to enter the affected areas to either help the people or assess the situation on-ground.

Pakistan is also going to issue a commemorative post stamp on this Solidarity Day. Thousands of people are going to be out on streets forming human chains, carrying placards and banners to support their Kashmiri Muslim brothers and sisters. A formal “One-minute silence” will be observed countrywide for which the Interior Ministry has issued a statement.

Pakistan has been observing Kashmir Day since 1990 but for the first time, it holds a very special place after India annexed the autonomy of Kashmir and the struggle against the illegal occupation intensified.

Pakistani government and people have been preparing for this year’s Kashmir Day since Jan 27 upon the direction from Prime Minister Imran Khan. Chief Minister of every province is set to address the respective rallies in their provinces and rallies will also be organized at the District level. Banners showing Kashmiri struggle and messages of solidarity have been erected all over the country, majorly at international airports and railway stations.

Read more: OIC to hold a special meeting on Kashmir issue in Islamabad

Pakistan Telecommunication Authority (PTA) will send special messages to 100 million consumers. Debate competitions will be held all over Pakistan in educational institutes focusing on the Kashmir Solidarity Day.

Pakistan Sports Board has prepared for a special female Hockey and a male Football match while Kashmir Cell has helped set up special desks at Safa Gold Mall and Centaurus Mall to help propagate the message. Picture exhibitions have been set up at Aiwan e Iqbal Lahore and most of the Art Galleries in Pakistan.

For 7 long decades, Kashmir has been waiting for justice & Freedom. On this day, We pledge to #StandWithKashmir through their think & thin. We as a nation will become the voice of Kashmir until they get their freedom . We urge the intl community to play their part pic.twitter.com/g1AXpGfPdv

Overseas Pakistanis have been participating in Pakistan’s struggle for Kashmir’s freedom and have prepared for this year’s Feb 5 events with zeal. Special programs have been organized at all foreign missions while a special campaign will be broadcasted on print and electronic media.

“Kashmir wants peace” and Pakistan will go to any lengths to help them win it, PM Khan and the people of Pakistan show resolve to help Kashmir get freedom from Indian occupation.