India for the first time finds itself on the wrong side of the International narrative. Its Ministry of Foreign Affairs and its Ambassadors are working hard to change this. Pakistan's Foreign Minister, Foreign Office and Ambassadors need to enhance their reach and visibility for what they now face is a war of narratives. GVS analyses.

India’s extremist Hindutva government’s irresponsible actions in Kashmir on 5th August suddenly created an unprecedented challenge for Pakistan’s foreign office and its missions across the world.

Pakistan’s key ambassadors & missions in Washington, New York, Beijing, London, Moscow, Brussels, Geneva, Riyadh, Abu Dhabi, and many other countries faced a serious test of their abilities and diplomatic skills after India took steps to integrate the disputed state of Jammu & Kashmir into its federal structure as Union territoris and revoked Art. 370 and 35-A in its thinly disguised attempt to trun Muslim majoirity into a minority – creating risks of a genocide against a defiant population. While some ambassadors and missions have shown the capacity to reach out to media and opinion makers most have remained stuck in old fashioned diplomacy.

The Indian Prime Minister Narendra Modi complaint to US President Donald Trump that he should intervene and ask PM Khan to minimize his rhetoric.

The curfew in Kashmir, has now entered into the second month. There is complete information blackout and the world is almost clueless as to what is actually happening inside Kashmir. Though few reports exposing Indian forces’ highhandedness have emerged from international media operating through their stingers and hidden cameras but due to a complete blackout on the mediums of disseminating information it is difficult to understand the changing situation. Anywhere between 5000 to 10,000 Kashmiri politicians, political workers, journalists, writers, academics and businessmen have been taken from their homes. Many of these have been taken to jails in Delhi, Agra and Poona.

All media – television, internet, newspapers, social media, cellular networks and even landline phones – are still blocked. United Nations officials, Human Right organizations and international media have no access. Only those Indian journalists who are close to Modi regime in Delhi are allowed to shape a narrative of normalcy for Indian public and the world. Pakistan’s foreign office and Ambassadors face a challenge to explain this dire situation to the world – most have not been able to meet this challenge.

How PM Khan took the Challenge?

It was a challenge as well as an opportunity for Pakistan’s foreign office and diplomats appointed in different countries to effectivey present Pakistan’s and Kashmiri people’s case before the world. What we have seen is that Prime Minister Imran Khan and his government have taken a strong position on the issue and premier’s personal profile played an important role in highlighting the the risks that the region and the world faces in Kashmir. PM Khan’s op-ed piece in the New York Times, his statements, speeches, interviews and tweets through his Twitter handle effectively put Kashmir’s case before the international community. However its felt that his personal stand and committment is often not matched by the foreign office. 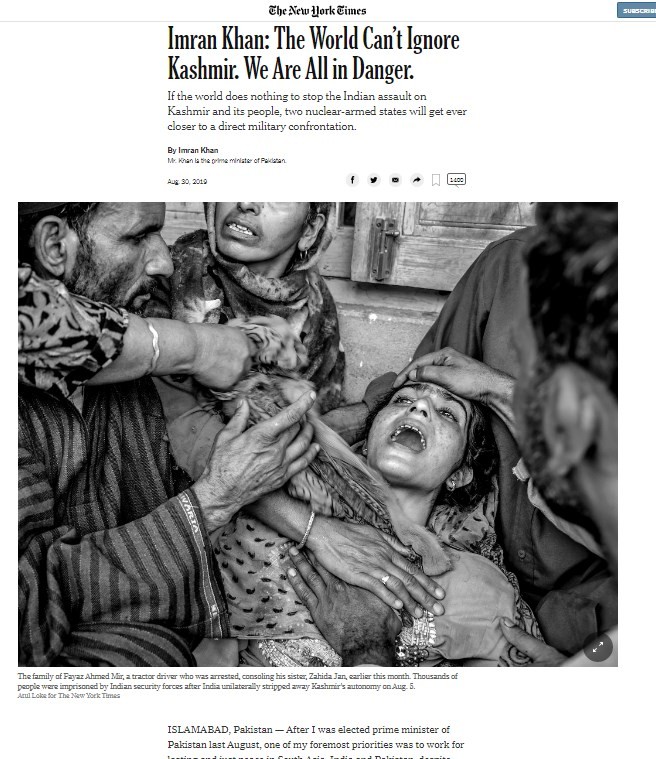 Prime Minister Imran Khan has taken a strong vocal positon against Indian prime minister Narendra Modi. He has openly called him a fascist and compares his actions in Kashmir with those of Hitler and Nazi Germany. Imran Khan’s twitter handle, followed by more than 10 million across the world, has emerged as an effective platform against Modi, who is nothing if he is not India’s Prime Minister.

Apparently this has rattled Narendra Modi. Political sources disclose that when Modi spoke to US President, Donald Trump, by phone a few days ago he complained about Imran Khan’s strong attacks agaisnt him. It is believed by some sources, in Islamabad, that Saudi Arabia’s State Minister for Foreign Affairs Adel bin Ahmed al-Jubeir and UAE Foreign Minister Sheikh Abdullah bin Zayed bin Sultan Al Nahyan, who arrived in Islamabad on Wednesday, (Sept, 4) had brought India’s message that Pakistan should tone down its rhetoric and aggressive position on Kashmir issue.

It was in this context that press briefing of the Inter-Services Public Relations (ISPR)’s DG Major General Asif Ghafoor on Wednesday took place. It was a clear message from GHQ, through national and international media, that Kashmir issue is vital, Pakistan army is extremely determined on the issue, there can be no compromise on it and if it remains unresolved, it might lead to a war between the two arch-rivals – who happen to be nuclear powers.

The political and diplomatic sources felt that Qureshi should have been more proactive instead of visiting his constituency several times since the issue has surfaced.

Here, the question arises why India’s powerful establishment is rattled? The answer lies in simple truth: this is the first time in the last 50 years plus when India does not have an argument to defend its actions in Kashmir. Throughout it has exploited world’s conscience in the name of terrorism even when it was its brute security appartus under attack from Kashmiris. But now its security clampdown and curfew in Kashmir has entered second month.

Admittedly, Indian establishment has advanatages of size, a strong financial position, powerful trade and commercial linkages but the bitter truth is: India does not have any argument to defend its position before the world. Currently, the so-called largest democracy has nothing to write, speak and tell the world to defend its adventurism in Kashmir.

In addition an extreme right wing Hindutva government may be very popular at home but is a distinct liability abroad – especially when its arch rival, Pakistan, has for the first time decided to expose India’s dark secret. For all practical purposes India is no more a democracy – it is being run by a bunch of crazy religious fanatics with a primitive world view. It is in this context that India’s foreign minister, foreign office, foreign secretaries, envoys are seen over active in Europe, the Middle East and many other regions since the clampdown in Kashmir.

On the contrary, Pakistan’s Foreign Minister Shah Mehmood Qureshi only visited China, which is considered an easy country for Pakistan. Other than that, the foreign minister has frequently visited Multan and held several press briefings in Pakistan or made telephone calls to his counterparts across the world. The political and diplomatic sources feel that Qureshi should have been more proactive instead of visiting his constituency several times since the issue has surfaced. Public and media are judging him and many others’ performance in foreign office for the last month and so. This is an age of media driven narratives and most of Pakistani diplomats, in key countries, are also not much visible.

Pakistan’s Permanent Representative to the United Nations, Dr Maleeha Lodhi, has been very active on television programs, social media and other forums highlighting Pakistan and Kashmir’s case before the world community and leaders. Dr Lodhi is seen active on her Twitter handle and her media team almost regularly shares different videos, including the ones that they have made themselves, on social media pages to continuously highlight the issue and draw internatinal attention towards grave situation in Jammu and Kashmir.

Dr. Lodhi, who has been Pakistan’s Ambassador to the US and UK, has a natural advantage; she has more than 400,000 followers on Twitter, and she is active every day as she posts tweets and videos through her account. She is also active on her Instagram and Facebook pages and continue to share posts that highlight different aspects of the Kashmir issue.

However, if Lodhi has become the standard bearer of this new age of diplomacy that demands reaching out to public, media and decision makers through enchanced visibiliy then most other key diplomats are lagging behind. A quick bird eye view reveals that Ambassador Asad Majeed in Washington has over 7,000 followers, Naghmana Hashmi in Beijing has just over 2,000 followers and Khalilullah Qazi in Moscow has only 15 followers. Most of these are active infrequently or active only occasionally by retweets. It may surprise many that Qazi’s account has no visible tweets. The official Twitter account of foreign ministry’s spokesman is doing better with around 231,000 followers. While these key diplomats must have been active in different fronts, its important for them to increase their visiblity.

Political and media analysts in Islamabad, GVS spoke with, believe that envoys, in this day and age, need to build a strong profile on mainstream media as well as on social media to establish Pakistan’s narrative in the war of narratives. This becomes all the more important when Prime Minister has single handedly turned himself into a “one man army”. His main tool is his Twitter Handle.

Previous articleIran will further accelerate its nuclear processes: Deal with EU unlikely
Next articleWhy GxP Is Essential Across So Many Industries

1 August 2022
Load more
Previous articleIran will further accelerate its nuclear processes: Deal with EU unlikely
Next articleWhy GxP Is Essential Across So Many Industries