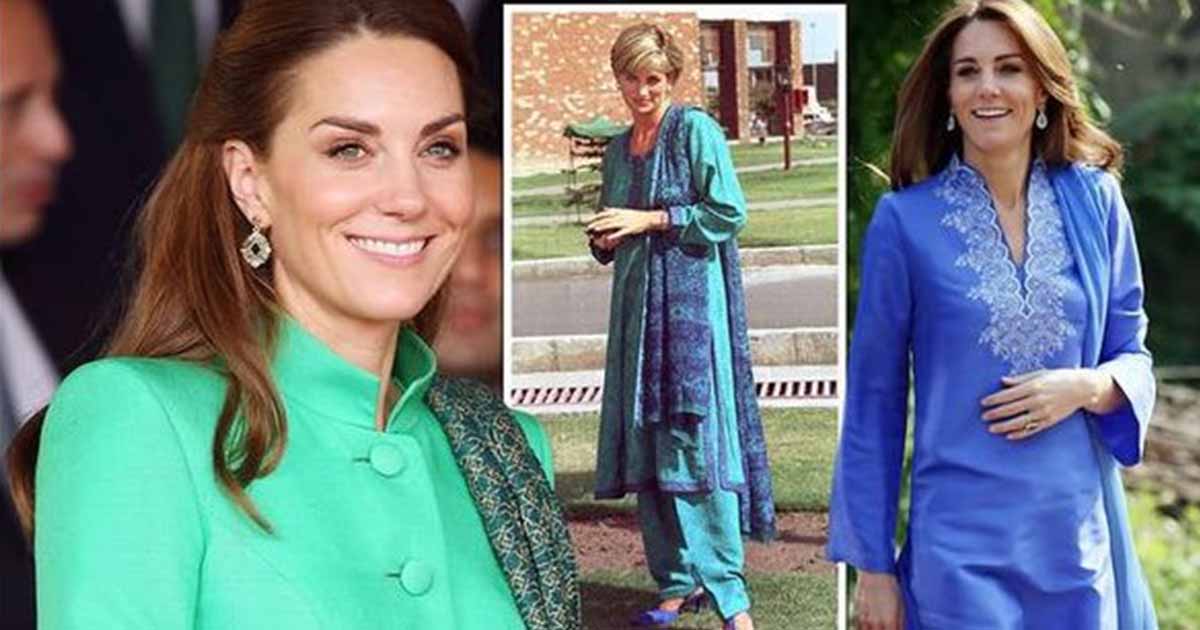 Amid her social engagements in Pakistan, the Duchess of Cambridge Kate Middleton’s garb and dressing style is garnering immense attention on social media, leaving fans in awe. The social media users are convinced Kate Middleton has effortlessly taken on the ethereal persona of her late mother-in-law, Princess Diana.

My team is proud to have worked on the Periwinke silk out fit for the Duchess https://t.co/3HQBmn7NR9

Instead of picking up the western style, Kate Middleton chose to don traditional eastern outfits with a touch of latest ongoing local fashion trends on her visit to Pakistan, sparking a strong reflection of mother-in-law Princess Diana who wore the traditional outfit on her tours to Pakistan.

Kate Middleton pays tribute to Princess Diana as she arrives in Pakistan wearing a shalwar kameez reminiscent of her late mother-in-law's 1996 outfit in Lahore#RoyalVisitPakistan https://t.co/XI1ql92QoS

Kate Middleton channelled Princess Diana's style on #RoyalVisitPakistan. Kate looked elegant in a turquoise shalwar kameez by Catherine Walker, one of Diana's favourite designers.Diana wore during her visit to Pakistan in 1996. #WelcomeToPakistan pic.twitter.com/bSxUTTGcl5

Kate descended the staircase from her plane in a double-shaded turquoise Kameez Shalwar from designer Catherine Walker, one of Diana’s cherished designer, upon her arrival to Pakistan last night. She paired the dress with her cream-colored high heels. Middleton wore earing from Pakistani brand ‘Zeen‘- the same earing she wore on her visit to Aga Khan Centre in London last week, worth Rs 835.

The Duchess of Cambridge during her visit to Islamabad.
Kate Middleton resembles Princess Diana as she arrives in a stunning Blue Shalwar Kameez #RoyalVisitPakistan pic.twitter.com/wtUqR81oZX

The dress had a striking resemblance to the long, light blue, button-up top, and trouser combo that Princess Diana wore during her tour to Pakistan in 1996.

Kate Middleton wore an embroidered neckline Kameez with a trouser and a dupatta settled on the shoulder. Her blue dress gave the reflection of Diana’s other dress, a blue Shalwar Kameez which she wore. Princess Diana frequently wore blue-colored Kameez Shalwars on her tour to Pakistan.

The Duke and Duches of Cambridge’s trip to #Pakistan makes the front page of Tuesday’s #DailyMail.
Also a fun tour fact: William and Kate’s departure from the UK yesterday was designed so that they could do the school run before they left 👶 #RoyalVisitPakistan @KensingtonRoyal pic.twitter.com/RN60qEKyK2

Welcome to Pakistan to the Duke and Duchess of Cambridge. Like your mother before you, you will have a truly memorable visit to this most hospitable and loving country. 🇵🇰❤️🇬🇧. #RoyalVisitPakistan @KensingtonRoyal @ukinpakistan pic.twitter.com/JZFn31CFgu

Kate Middleton, once again amazed the people when she appeared to meet President Arif Alvi and Prime Minister Imran Khan in a white and green ensemble. While TRH Kate Middleton could have opted for western designers, she is wholeheartedly wearing and supporting Pakistani brands on her tour to Pakistan. Some calling it Kate Middleton wowing the colors of Pakistan’s flag.

The Duchess of Cambridge Kate Middleton wowed in colours of Pakistan’s national flag on Tuesday as the royal couple are visiting the country.#ARYNews #RoyaltourPakistan #RoyalVisit #KATE

Catherine Walker first designed maternity dresses for Princess Diana when she was expecting Prince William, and in 1991 helped her make a diplomatic fashion statement when she created a pale pink sarong-style gown for a reception in Lahore.

15 British-Pakistanis elected to the British Parliament