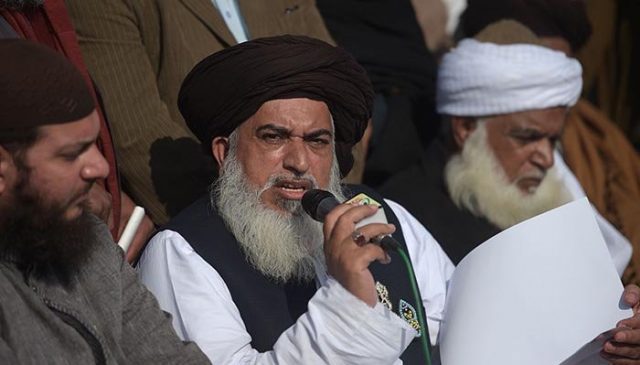 Tehreek-i-Labbaik Pakistan (TLP), a religious political party, has once again decided to come at roads and “stay on the streets until either the publication of blasphemous cartoons in the Netherlands end or the government immediately ends diplomatic ties with the Dutch”. The religiopolitical party urged the Pakistan Tehreek-i-Insaf (PTI) government to not only “discontinue diplomatic and commercial relations with the Netherlands” but also “demand from other Islamic countries to do the same”.

Moreover, Maulana Khadim Rizvi-led TLP also demands that since the said competition’s judge is an American national, “therefore, strict measures should also be taken against the US”. According to the sources, the party “will take to the streets at 2 pm on Wednesday (August 29) and begin from Data Darbar Lahore its march towards the capital.”

PVV Plans for a Cartoon Competition

According to media reports, recently a Dutch far-right party, Netherland’s Freedom Party (PVV) announced it plans for a cartoon competition that depicts Prophet Muhammad (Peace Be upon Him), a blasphemous act for Muslims, which will be put on display in the party’s parliamentary offices.

The Inter-Services Intelligence (ISI) submitted a report to the SC during the days of sit in. Justice Mushir Alam and Justice Qazi Faez Isa were hearing the Suo Motu notice of the disturbance to public life due to the sit-in at Faizabad.

Moreover, Geert Wilders, the leader of PVV, announced on Twitter that the country’s National Security and Struggle against Terrorism Coordinator (NCTV) Dick Schoof permitted the party to hold the contest. The coordinator expressed that there is no security risk concerning the contest since it will be held in a highly secured room of the parliamentary building, news reports said.

The Foreign Office (FO) on 20th August called the charge d’affaires of the Netherlands to record a protest against the “announcement by the leader of Dutch Freedom Party and Parliamentarian Geert Wilders to hold a competition of blasphemous caricatures.”

According to a statement issued by the Foreign Office, Pakistan’s Ambassador in The Hague has also been instructed: “to forcefully raise the issue with the Dutch government along with Ambassadors of Organisation of Islamic Cooperation (OIC) member states.” Moreover, the Foreign Office has also assured that Foreign Minister Shah Mehmood Qureshi will lead the discussion of the matter in the upcoming meeting of the OIC Council of Foreign Ministers, scheduled to be held in September.

The TLP organized a sit-in in Faizabad to protest against the government’s alleged involvement in modifying Khatm-e-Nabuwat [finality of Prophet-hood] clause in the Elections Bill 2017. The then law minister Zahid Hamid had to resign after the assurance that no Fatwa would be issued against him.

The ISI submitted a comprehensive report to the SC and declared Khadim Rizvi as “reportedly corrupt”. Rizvi has been also listed as being “arrogant” with his superiors, “harsh” with his subordinates, and “committed” to his cause.

The Inter-Services Intelligence (ISI) submitted a report to the SC during the days of sit in. Justice Mushir Alam and Justice Qazi Faez Isa were hearing the Suo Motu notice of the disturbance to public life due to the sit-in at Faizabad. In the report, the ISI told the SC that the sit-in was politically motivated and had political interests.

“The Tehreek Labbaik Ya Rasool Allah is determined to exploit the situation and gain political mileage to gain support for the next general elections,” said a six-page order issued by a two-judge bench consisting of Justice Mushir Alam and Justice Qazi Faez Isa.  “To keep the participants of the sit-in engaged and charged, the leadership of the protesters resorted to delivering provocative speeches,” the ISI report read.

The ISI submitted a comprehensive report to the SC and declared Khadim Rizvi as “reportedly corrupt”. Rizvi has been also listed as being “arrogant” with his superiors, “harsh” with his subordinates, and “committed” to his cause. It has also been stated that Rizvi is “reportedly corrupt” particularly when it comes to financial matters. Moreover, it is also a fact, point out the report that he appears to be living within his means. The report further notes that he has shown an inclination towards misuse of power, the authorities, and resources.

Anti-Muslim Protest in the West

According to media reports, hate crimes against mosques and Muslims have been on the rise across Europe in recent years, fueled in part by the success of anti-immigrant, Islamophobic groups in gaining political power. In such a situation, argue Pakistan-based analysts, nobody should take advantage of some very sensitive developments. Pakistan has recorded the protest and will further take up the matter but it is not possible to declare a war against the entire nation.

Khadim Rizvi, who is reportedly a political opportunist, is going to launch one more campaign to maintain his political support in the country. The question is how the PTI-led government will maintain law and order situation when the leader of the TLP will use religion and exploit the popular sentiments.

Is contesting from five seats in the elections the best decision for Imran?

Is NAB really capable of initiating meaningful investigation against Nawaz?

Political Incorrectness continues at the Oscars as nominees emerge