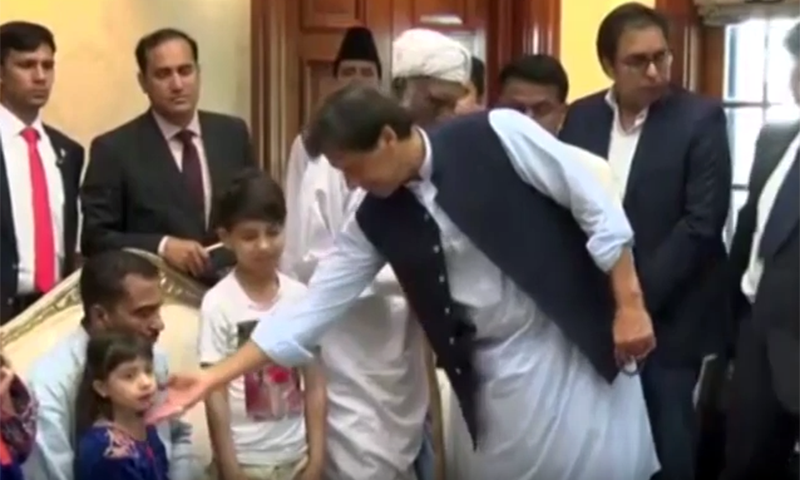 Pakistan Tehreek-i-Insaf (PTI) chief Imran Khan appeared on Tuesday before an anti-terrorism court (ATC) regarding the 2014 attack on Pakistan Television (PTV) headquarters. ATC judge Shahrukh Arjumand has adjourned the hearing until 2:30 pm. Khan is one of the accused in the four cases related to the attack.

During the hearing, Khan’s lawyer Babar Awan tried to convince the court to remove Khan’s name from the case since none of the police officials assaulted during the attack named Imran Khan as a participant.  He also argued that none of the 11 witnesses of the attack specifically name Khan.

Power should not be used to settle scores because the wheel of time keeps turning and you might end up being on the wrong side of it.

The state prosecutor denied Awan’s arguments and claimed that Imran Khan and PAT chief Tahir Ul Qadri provoked the protesters which ultimately led to the attack. He said that he had recordings of the speeches and footage of the attack when he was rebuked by Khan, protesting that the allegations were based on lies. Later, the prosecutor showed the pictures to the courtroom.

After leaving the courtroom, Imran addressed the media. He secured bail and stated that he was not a ‘ladla’ (darling) but was ‘sadiq’ (truthful) and ‘ameen’ (righteous). He later posted this on his official Twitter account:

My name is Khan and I am not a terrorist. Moreover, the SC has pronounced me Sadiq and Ameen and I am coming after them crooks!

In August 2014, Imran Khan’s PTI and Tahir Ul Qadri’s PAT held a joint protest in Islamabad over the alleged rigging in 2013 elections, and the massacre at Model Town Lahore. The sit-in lasted 104 days, making it the longest in history. During the sit-in, protestors stormed the headquarters of Pakistan Television (PTV), attack the parliament and allegedly tortured senior superintendent police Asmatullah Junejo. Imran Khan condemned the attack and claimed that the protesters were not from his party.

The culture of political victimization needs to end if Pakistan wants to make serious progress towards becoming a democratic country.

The ATC accused Imran Khan in four cases regarding the protest and issued non-bailable arrest warrants against the PTI chief. Khan was not arrested even after the orders by ATC and only surrendered when the ATC ordered the seizure of his assets. He was granted an interim pre-arrest bail on 14th November which was later extended. Imran Khan also requested the transfer of cases to civil courts but the ATC refused his request.

Imran Khan called the cases as an act of revenge and accused them of being politically motivated. Khan’s lawyer Babar Awan said that if the government starts arresting people for speeches then all political leaders would be in jail. The PTI leader also accused that the Sharif family was trying to portray him as a thief, just because they themselves have proven to be thieves. He refused to admit any responsibility for the attacks.

There is an increasing trend of crushing political dissent by using legal means in this country. It can be observed the enactment of Prevention of Electronic Crimes Act (PECA) 2016. It is being used as a legal weapon to crush any sort of online political dissent the same way Imran Khan is being accused of provoking the protesters to attack the PTV headquarters. There are similar cases at hand in which protesters vandalized public and private property but no cases were filed against them, and they government allowed them to walk free with a clean slate. One such case is the recent Faizabad sit-in by Tehreek-i-Labaik.

Khan was not arrested even after the orders by ATC and only surrendered when the ATC ordered the seizure of his assets.

The protesters destroyed property, killed a few and injured scores of police officials and citizens, burnt vehicles and blocked the main artery to the capital for three weeks. Despite the damage they caused, no cases were launched against TYLR leadership, all the arrested protesters were released and the government signed a one sided agreement with the protesters. There appears to be a case of selective justice being dished out agaisnt Imran Khan.

Battling against the odds, Imran Khan has marked another victory in his road to the 2018 elections, making him the favourite to become the next PM of Pakistan. The culture of political victimization needs to end if Pakistan wants to make serious progress towards becoming a democratic country.

Dissent lies at the heart of democracy and protests are the right of every citizen. While it is the responsibility of leaders and citizens to protest peacefully, it is the responsibility of the government to protect the right of citizens and ensure that they are given space to express their opinions. Power should not be used to settle scores because the wheel of time keeps turning and you might end up being on the wrong side of it.

Private Channels Banned: Welcome back to the World of PTV in Pakistan