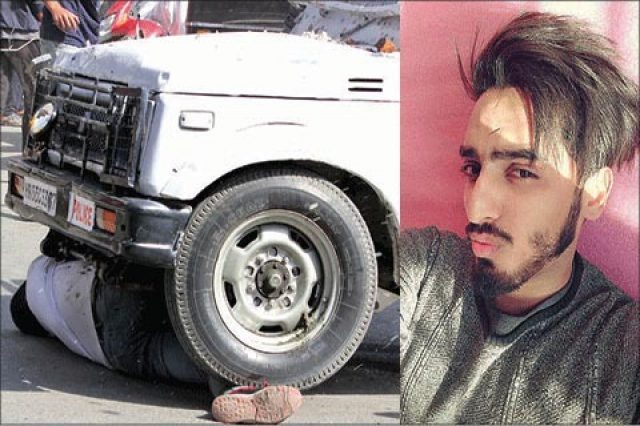 Hurriyat leaders and organizations have continued to condemn the crushing to death of a youth, Qaisar Butt, by a vehicle of Indian paramilitary Central Reserve Police Force and shelling on thousands of mourners at his funeral in Srinagar, recently.

According to KMS, the spokesman of Jammu and Kashmir Muslim League (JKML) in a statement issued in Srinagar termed the incident as inhuman and cruel. He said that on one side India had announced so-called Ramadan ceasefire and on the other, the killing spree of innocent youth by Indian forces continued either by bullets, pellets or by crushing them under their vehicles.

He said India has occupied Kashmir for the last 70 years and since then they are involved in human rights violations, killings and arrests without any reason by using different tactics but would never succeed in weakening the freedom sentiment of Kashmiri people.

The High Court Bar Association (HCBA) of the territory in a statement in Srinagar condemned the mowing down of three innocent civilians by a CRPF vehicle at Nowhatta on Friday, out of whom one Qaiser Butt died in the hospital. It also condemned Indian forces for resorting to indiscriminate firing of pellets and teargas shells on the mourners of Qaiser Butt at Fateh Kadal on Saturday in which 20 people were injured.

It termed the registration of the FIR against the driver of CRPF vehicle an attempt to shield the culprit, though, he has committed the crime in broad day light, which has been video taped and seen by everyone on social media.

Meanwhile, a delegation of Tehreek-e-Hurriyat Jammu and Kashmir led by Bashir Ahmad Qureshi visited the residence of Qaisar Butt at Fateh Kadal in Srinagar and expressed solidarity with the bereaved family.

Jammu Kashmir People’s League Chairman Mukhtar Ahmad Waza, today, also visited the residence of Qaiser. Waza while addressing mourners paid glorious tributes to the martyred youth and expressed deep sympathies with his family. He said the Killing spree of Kashmiris by the Indian forces continued despite the so-called Ramadan ceasefire.

Erdogan calls for Kashmir Solution based on justice and equity