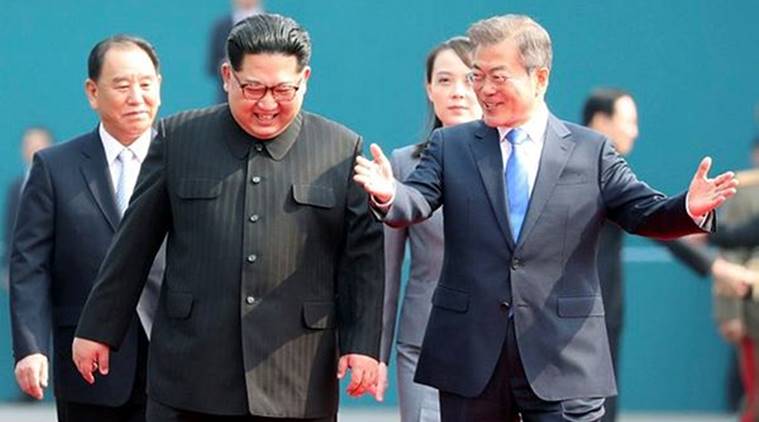 Kim Jong Un is going to be the first ever North Korean leader to step on the Southern side of the Korean peninsula, since the cease-fire of the Korean war in 1953. Also, it has been more than a decade since the leaders of both North and South Korea came across each other, last being Kim Jong-il, Kim Jong Un’s father, meeting president of south Roo Moo-Hyun at a summit in 2007.

The schedule of the meeting as released by South Korea details the time of meeting to even the dessert which will be served after lunch. Kim Jong Un will be accompanied by his sister Kim Yo-Jong and marking another unprecedented development, military, and diplomatic officials as well. The meeting has been regarded with high stakes by international observers and analysts as it will set the discourse for Kim’s meeting with US president Donald Trump, which is about to happen in a matter of a month or so.

The delicacy of the matter demands it to be dealt with extreme caution if stakeholders are sincere to reach an acceptable, agreed and desired outcome.

Though it will still be considered as North Korean President’s historic visit to the south, the meeting is scheduled to take place in the concrete structure built at Demilitarized Zone between the two countries. The Demilitarized Zone (DMZ) is a region on the Korean peninsula that demarcates North Korea from South Korea.

The areas north and south of the demarcation are heavily fortified, though skirmishes between the two sides are rare. The demilitarized zone (DMZ) incorporates territory on both sides of the cease-fire line as it existed at the end of the Korean War (1950–53) and was created by pulling back the respective forces 1.2 miles (2 km) along each side of the line.

What outcome to expect at the end of this Meeting?

More consistently in the recent times, Korean conflict has been presented, with high plausibility, as the region for having the potential of a military escalation leading to a nuclear standoff. A ray of hope emerged from Kim Jong Un’s New Year address, where he gave a green signal to the dialogue with South.

Matter further proceeded to take the optimistic route when it was announced in Washington by a South Korean diplomate that Kim is willing to meet US President Donald Trump. It was something interpreted between a success of backchannel diplomacy to North Korean desperation to get the enacted economic sanctions removed as soon as possible.

Kim Jong Un will be accompanied by his sister Kim Yo-Jong and marking another unprecedented development, military, and diplomatic officials as well.

South Korea has already warned that it is going to be a very difficult task to convince Pyongyang to give up its nuclear arsenal. It certainly marks a more pragmatic approach toward the dialogue process unlike its ally the United States, who want North’s nuclear weapons to be destroyed at earliest.

President Moon Jae-in of South Korea will be seeking to discuss the matter of de-escalation of military tensions and then eventually forge closer economic and social ties between two countries. Given the South Korean approach, it can be safely said that it wants to capitalize the opportunity, as it has presented, to bring peace in the peninsula.

Generally held belief is that it was the economic sanctions which compelled Kim to go down the path of dialogue rather threatening the US with its nuclear missiles. But the state media of DPRK is putting a counter, and equally valid, reason of “self-confidence” to be driving the dialogue process, especially at this point in time. An ability to take the offensive back to American soil, something which USA has not experienced for a long time if we exclude PEARL harbor as an anomaly, gives North a leverage at the dialogue table.

How will it affect Kim-Trump meeting?

This meeting is going to decide the contours of Kim-Trump meeting, which is already hovered by speculations and ambiguity. US President Donald Trump said he is considering three or four dates as well as five locations for his planned meeting with North Korean leader Kim Jong Un, adding that it remains unclear whether the meeting will still occur. The positive developments coming from Korea are certainly the biggest news of the year 2018 so far.

The delicacy of the matter demands it to be dealt with extreme caution if stakeholders are sincere to reach an acceptable, agreed and desired outcome. Comments such as these from US president can prove to be counterproductive and death to the peace process, if they continue.

RTS Failure: Why Cabinet Division fails to initiate an Enquiry?

Kasur incident: What happened and what needs to be done?