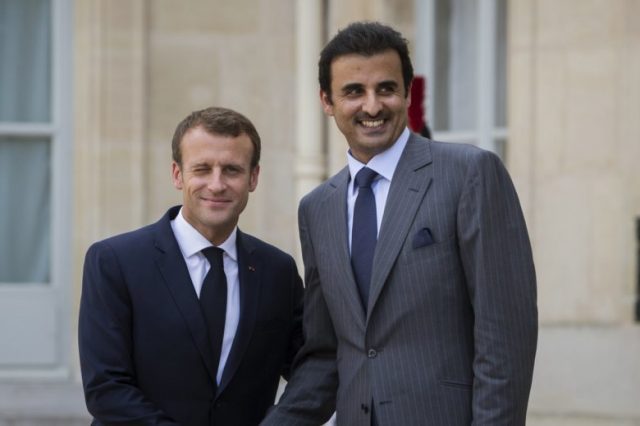 According to the report of a French daily newspaper, Le Monde, King Salman has written a letter to the French President Emmanuel Macron encouraging him to use his influence and stop Qatar from buying an S-400 system from Russia. The report has been widely republished and analysis has been made by the renowned news outlets worldwide as it is the latest twist in the Qatar-Gulf rift.

King Salman, in his letter, has deemed the deal as a threat to the national security of the Kingdom and stated that all options are open, including a military strike to eliminate the system if procured.

“[In such a situation], the Kingdom will be ready to take all the necessary measures to eliminate this defense system, including military action,” King Salman was quoted from the letter, whose content Le Monde obtained via a source close to the Elysee Palace.

Saudi Arabia along with other Gulf countries including Bahrain, United Arab Emirates, and Egypt had implemented an air, land and sea blockade against Qatar in June 2017 following allegations of supporting terrorists and closing ties with Iran – a long-term archrival of Gulf countries especially Saudi Arabia. Qatar has repeatedly and categorically rejected the allegations but the Gulf countries remained adamant to fulfill their demands before the blockade could be lifted off. One of the demands included the shutting down of Al Jazeera news network and a Turkish Base inside Qatar.

Qatar, for far too long, had been dependent upon it neighboring Gulf States as it is a nonagricultural country and has to import all means of subsistence.

The blockade had significantly cost the economy of the country. Qatar Airways, one of the top airlines of the world, had to take lengthy detours to reach the destinations, resulting in an increase of fare and thus decrease in demand.

To help itself out of this utter dependency, Qatar decided to look for friends and began forging ties with the countries such as Russia.

Both the countries signed the MoU for cooperation in various fields in October 2017. In January 2018, Qatar announced that talks with Moscow on supplying the sophisticated S-400 system were at an “advanced stage”. It is important to mention here that Saudi Arabia has itself signed a preliminary contract for the procurement of the same surface-to-air missile system with Russia. But when it comes to other countries, especially those which it despises such as Iran and Qatar, Saudi Arabia uses the influence and ties it has with the global powers to thwart the deals. However, it is very unlikely that Russia or even Qatar is going to succumb to such bullying tactics.

It remains to be seen how the United States responds to the latest turn of events. Initially, the US backed the Gulf quartet’s decision of blockade, asking Qatar to mends its ways.

But with continuous efforts and lobbying inside the United States, Doha was finally able to turn the tide around when President Donald Trump-hosted Qatar’s Emir Tamim bin Hammad Al-Thani in April of 2108 at the White House. From describing Qatar as a “funder of terror” back in 2017 to the US president applauding the efforts of a tiny Arab state to combat terrorism, it was believed to be a victory of Qatar’s diplomacy.

Though President Trump has been keen to become a mediator in the feud between Arab Sunni states, the end of this crisis is still not in sight. Bahrain’s Foreign Minister Sheikh Khalid bin Ahmed al-Khalifa also said last week, in an interview with the Saudi-owned Asharq al-Awsat newspaper, that there was no “glimmer of hope” for an end to the crisis. On the other hand, Russia has emerged, yet again, as the beneficiary of political development, where the United States is finding itself standing at the whirlpool of conflict of interest. Moreover, unlike the USA, Russia will refrain from meddling militarily in the Gulf conflict at any cost.

How can Pakistan balance foreign loans with sustainable growth?