AQI ranking places Lahore at the worst place in regard to air pollution and smog and people are continuously suffering. Lahore air has turned hazardous and measures being taken by the government do not seem to have any effect in ending the plight. 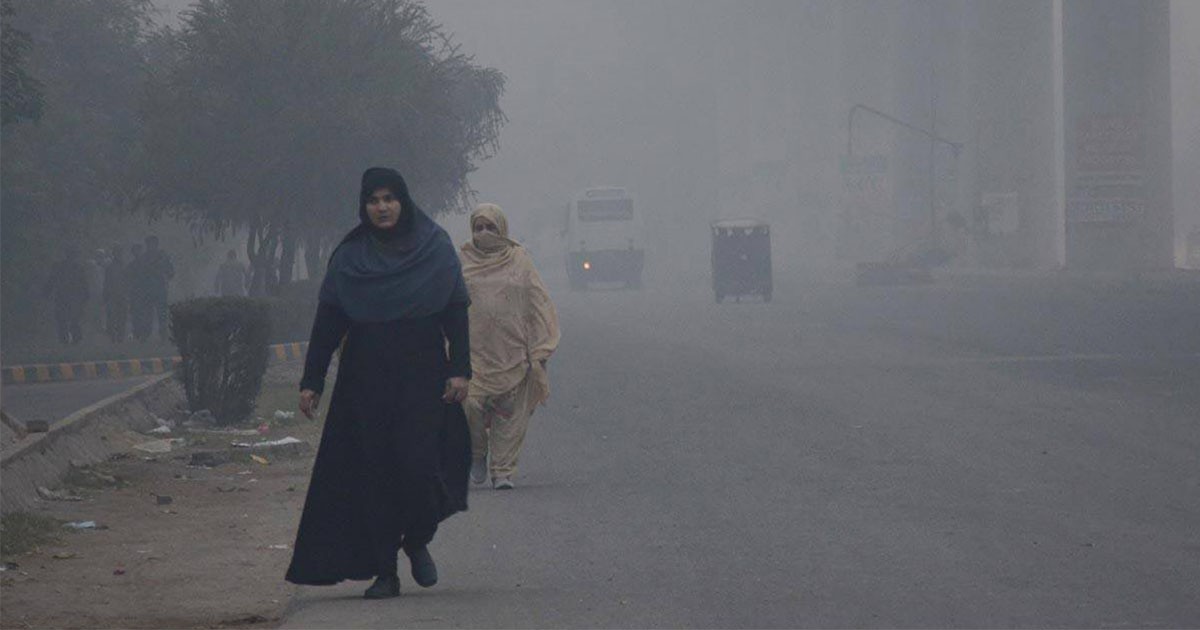 Lahore’s air quality remained ‘hazardous‘ with an air quality exceeding 300, according to Air Visual’s Air Quality Index (AQI) list. An AQI ranking between 301-500 (or above) is classified as ‘hazardous’ and “triggers a health warning of emergency conditions. The entire population is more likely to be affected”, according to Air now.

The Punjab capital is ranked the second most polluted city in the world, according to Air Visual, which records air pollution levels across the globe in real-time. The issue of smog started in 2006 in Lahore whereas Delhi holds the top spot, with an AQI of 556 recorded for last week.

A few weeks ago, a group of teenage students petitioned the Lahore High Court seeking change in the AQI measurement system and implementation of the Smog Policy. Air pollution is a mixture of solid particles and gases in the air. Car emissions, chemicals from factories, dust, pollen and mold spores may be suspended as particles. Ozone, a gas, is a major part of air pollution in cities.

When ozone forms air pollution, it’s also called smog. Some air pollutants are poisonous. Inhaling them can increase the chance of health problems. People with heart or lung disease, older adults and children are at greater risk from air pollution. Air pollution isn’t just outside – the air inside buildings can also be polluted and affect your health.

Smog is a mixture of air pollutants that combine with sunlight to form ozone. Ozone can be beneficial or harmful, good or bad, depending on its location. Smog can cause or aggravate health problems such as asthma, emphysema, chronic bronchitis, and other respiratory problems as well as eye irritation and reduced resistance to colds and lung infections.

The ozone in smog also inhibits plant growth and can cause widespread damage to crops and forests nine out of ten people now breathe polluted air, which kills 7 million people every year. In September, the UN Intergovernmental Panel on Climate Change warned that coal-fired electricity must end by 2050 if we are to limit global warming rises to 1.5C.

If not, we may see a major climate crisis in just 20 years. Whereas Karachi is the seventh most polluted city in the world with an AQI of 167 and is classified as ‘unhealthy’. AQI recorded between 151-200 is classified as ‘unhealthy’ and the air quality may cause the entire population to experience adverse effects. ‘Sensitive groups’, i.e., people with lung diseases, children and elderly people, will be at greater risk, according to Air Now.

More liquid usage and mouth masks usage can decrease bad effects. Environmental activists and medical practitioners, including the representatives of the Young Doctors Association (YDA), held a demonstration and talk outside the Jinnah Hospital on recently regarding the smog crisis in the provincial capital.

In an air quality index (AQI) of around 450, those gathered demanded the provincial government show what concrete steps it had taken to control the air pollution levels. An online petition is also being circulated where doctors’ demands were made.

A few weeks ago, a group of teenage students petitioned the Lahore High Court seeking change in the AQI measurement system, and implementation of the Smog Policy

According to research by The Lancet-the health journal, a shocking number of at least 135,000 people, most of them children, die annually in just Lahore, only because of air pollution. Research by Air Quality Life Index (AQLI) has pointed out that Lahore residents have started facing a reduction of life expectancy by five years.

Most doctors themselves are unaware of the enormity of the situation that’s why they have not taken the call till now. They should treat this as a campaign like they do dengue and smoking. Epidemiological research is as integral to know where society stand to measure the burden of smog.

Substandard fuel being a major culprit in the contribution of particulate matter 2.5. While the world standard was set at Euro 6 emission standards, the Punjab Clean Air Action Plan had set its own standards which were only at Euro 4; however, even that was not being followed.

Pakistan currently still at Euro 2 perhaps. High sulphur content is causing a huge problem. Currently, the desired limit of sulphur in fuel is at Euro 6 which is 5 to 10 parts per million or 0.0005g/km. But High-Speed Diesel Pak-2 standard, for example, has 1,000 parts per million.

Climate change and air pollution issues are major ones. The indifference being shown by the government is pathetic. Some segments of society likened the smog crisis impact to be almost as scary as a terrorist attack. The government should give out PM2.5 masks free, especially to those of lower socioeconomic classes, because they could not afford to spend Rs300 on one mask.

In an AQI of around 450, those gathered demanded the provincial government show what concrete steps it had taken to control the air pollution levels

Sanitary workers and traffic police should get these masks as they are most exposed. The pollutants of the greatest health concern were the fine airborne particulates produced by the combustion of fossil fuels and biomass, both PM 10 but PM 2.5 being far worse. The particulate air pollution has been linked to heart disease, stroke, chronic obstructive lung disease, lung cancer, premature birth, dementia, and adverse effects on brain development.

The measures detailed by the report of the Commission on Smog 2018 must be implemented. These include publicizing data and findings of air pollution impacts, development of health emergency responses at district level, the passage of the Punjab Clean Air Act to define emission and demarcate areas for clean-up, declare Smog Days when the average PM 2.5 level exceeds unhealthy levels of above 35.4 kg/m3 and the AQI exceeds 151.

During this time, the children are to be kept home from school and parks are closed as these concentrations of pollutants in the air constitute a public health emergency.

Other than this, school buses, odd-even days, and carpooling for all children traveling more than 1km to school should be encouraged and implemented, hotspots be identified (where the concentration of PM 2.5 is highest) and institute strict controls on the volume of traffic and vehicular emissions passing through, expand public transport infrastructure, shut down industrial units operating without emission control equipment, and close down coal-fired plants and transition to cleaner energy sources as a medium to long-term strategy, within 2-3 years.

Dr. Zeeshan Khan is a medical doctor by profession, a content writer, freelance writer, certified trainer and Poet. He is a motivational speaker, Cultural-cum-Political Analyst and columnist and has written for a number of English and Urdu dailies like Dawn, Express Tribune, The Business, The Educationist and Roznama Pakistan etc. He is also Alumni of LUMS and  Winner of all Pakistan Ubqari story Writing Competition. The views expressed in this article are the author’s own and do not necessarily reflect the editorial policy of Global Village Space.

The Power Of Siberia: Russia and China paving path for CPEC

How dysfunctional state structures can fail us in every crisis?