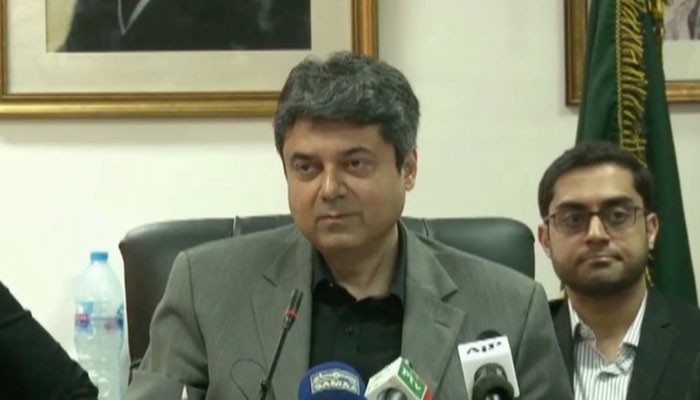 Farogh Naseem, Minister for Law and Justice, has refused to comment on the case of former military dictator Pervez Musharraf. Mr. Naseem was chairing a meeting of Task Force on Civil Service Reforms on Friday. “I have said in the past to not ask me a question on this [Musharraf trial]. I will keep on responding ‘no comment’,” said Mr. Nassem. However, the law Minister spoke about new legislation to ensure accountability and rule of law.

He also informed the meeting that changes were being made to deal with civil cases at the earliest and said that three recommendations have been prepared to provide the public with better justice.

General (retd) Musharraf is being trialed for imposing emergency in 2007 and detaining the judges of the Supreme Court of Pakistan. A case was registered against him in 2013 and his name was placed in the Exit Control List (ECL) by the Federal Investigation Agency (FIA) on the directives of the Sindh High Court (SHC).

The CJP was hearing a petition filed by Musharraf on June 05, 2015, regarding the alleged rejection of his nomination forms for the upcoming general elections. According to media reports, the former military ruler had filed his nomination papers to contest for a National Assembly seat – NA-250 Karachi (South).

Later on, the Supreme Court of Pakistan allowed Musharraf to go abroad for his medical check-up and his name was removed from the ECL. Moreover, the special court has also declared Mr. Musharraf an absconder, issued perpetual warrants of his arrest and commenced proceedings under Section 87, 88 CrPC for attachment of his properties on July 19, 2016.

As the former President’s NIC has been blocked, he won’t be able to leave the country or withdraw money from his bank accounts. “He will also be barred from sale and purchase of his properties in Pakistan and abroad,” said sources.

The Chief Justice Mian Saqib Nisar on 7th June gave another opportunity to the former Army Chief Pervez Musharraf to return back to Pakistan and appear before the court. The CJP said that the former president Pervez Musharraf will not be arrested if he arrives in Pakistan to file his nomination papers for the upcoming general elections.

The CJP was hearing a petition filed by Musharraf on June 05, 2015, regarding the alleged rejection of his nomination forms for the upcoming general elections. According to media reports, the former military ruler had filed his nomination papers to contest for a National Assembly seat – NA-250 Karachi (South). But the returning officer rejected his papers on the grounds “that he had held in abeyance and suspended the Constitution on Nov 3, 2007, detained and removed a number of superior court judges and publicly insulted then chief justice Iftikhar Muhammad Chaudhry”.

Pervez Musharraf argues that the emergency he declared in 2007 was not only his decision. “It is a matter of record that a number of politicians and members of the last and current national and provincial assemblies were consulted before imposing the emergency,” the lawyer of the former President has contended.  But, later on, Mr. Musharraf decided not to come.

It is yet to see that what will the court do during the next hearing? But it is expected that the former president won’t come back and face the courts since he knows he is likely to get no favor from the courts.