Lebanese media reported that the exchange rate had touched 6,000 pounds per dollar on the black market at one stage on Friday. Such a massive devaluation in currency has prompted the Central Bank of Lebanon to inject dollars into the markets, as protestors rage over the economic crisis. 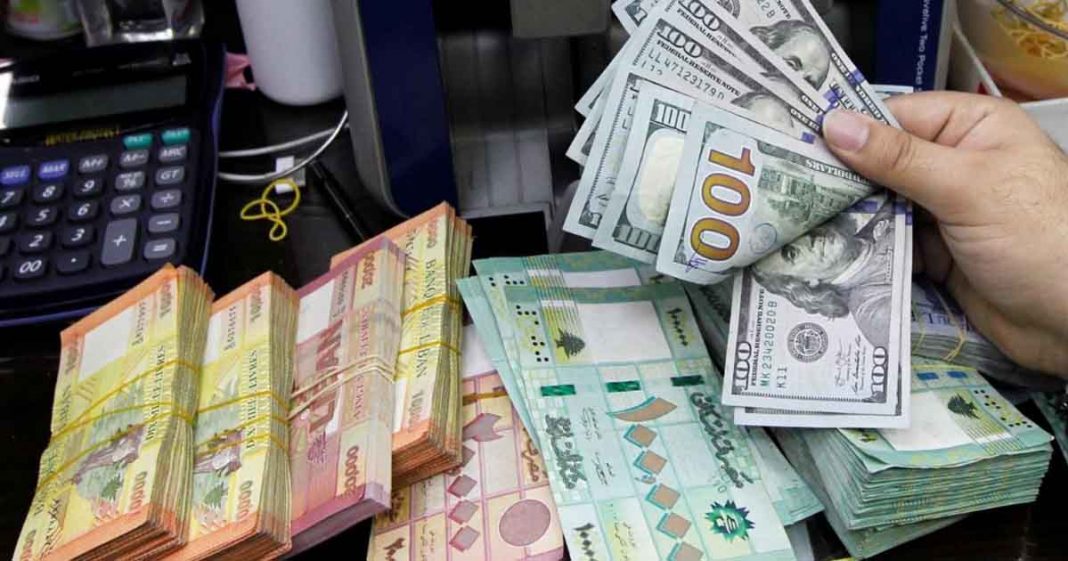 Lebanon’s government Friday pledged to inject dollars into the market, after a night of angry protests triggered by the currency plumbing new black market lows and the worst recession in decades.

An economic downturn since last autumn has seen widespread layoffs and swingeing pay cuts that mean 45 percent of the population is now in poverty.

After a crisis meeting on Friday, President Michel Aoun announced that the central bank will from Monday begin to execute measures including “feeding dollars into the market”, in a bid to bolster the sagging currency.

Lebanese media reported that the exchange rate had touched 6,000 pounds per dollar on the black market at one stage on Friday, compared to the official peg of 1,507 in place since 1997.

The worst economic turmoil since the country’s 1975-1990 civil war has sparked an unprecedented months-long street movement against a political class deemed corrupt and incompetent.

The lockdown accelerated the country’s economic decline. Businesses have closed and unemployment has spiked as the government has cascaded toward insolvency. In March, it failed to make a $1.2 billion payment for foreign bonds, the first such default in Lebanon’s history.

A new government led by Mr. Diab, who was sworn in in December, is in talks with the International Monetary Fund over a multibillion-dollar aid package, but there are no signs of an imminent agreement.

Much of the public anger has focused on the banks, which have imposed tight restrictions on dollar withdrawals, and on the collapse of the Lebanese pound, which the government had kept pegged at 1,500 to the dollar for decades, permitting Lebanese to use the two currencies interchangeably.

But the pound’s value has been dropping on the black market for months, and on Thursday reached a new low: more than 5,000 to the dollar. That is a 70-percent drop in value since October.

A new wave of anti-government protests erupted across Lebanon on Thursday with people blocking roads, burning tires and chanting against the political elite amid a deepening economic crisis.

The protests, in a number of cities and in multiple parts of the capital, Beirut, did not appear to be coordinated, but broke out after the Lebanese pound sank to a new low against the U.S. dollar, obliterating the purchasing power of many Lebanese.

Protesters had taken to the streets after sundown on Thursday, setting tyres on fire and blocking roads including in the capital Beirut.

Demonstrators rallied against a government that has been unable to arrest the economic decline, as well as against the governor of the central bank, Riad Salame.

Parliament Speaker Nabih Berri, who attended the meeting with the president alongside Prime Minister Hassan Diab, said the government’s measures aimed to bring the exchange rate to stronger than 4,000 pounds to the dollar.

Lebanon: Exchange rate "should drop below 4,000 per dollar starting next week, House Speaker Nabih Berri said. The aim is to bring the rate to 3,200."

The black market rate had appreciated to below 4,500 on Friday evening after the president’s announcement, two dealers said. After nightfall, dozens protested outside the central bank in Beirut.

Tensions have grown recently between the government, which is backed by Shiite movement Hezbollah, and the central bank’s governor.

Experts say the cabinet would like to see Salame removed from the position he has held since 1993.

Protesters accuse him of having encouraged state borrowing over the decades that they say benefited only the banking and political elite.

Anger against banks has risen in recent months, after they banned all transfers abroad and gradually restricted dollar withdrawals, forcing those in need to buy the greenback at unattractive rates on the black market.

“Several currents taking part in the protests want to topple the central bank governor and hold him accountable for the financial” crisis, among them Hezbollah, Lebanese American University professor Imad Salamey told AFP.

Hezbollah supporters joined the demonstrations late Thursday, despite usually being against the protest movement that begin in October.

“Riad Salame, game over,” read the front page of the Al-Akhbar newspaper close to the Shiite movement on Friday morning.

The previous government stepped down under street pressure just weeks into the demonstrations that began in October, and Diab’s cabinet began work earlier this year.

Analyst Hilal Khashan said citizens had recently returned to the streets because they feel nothing has changed.

Back in November of 2019, Lebanese protesters demanding radical reform reacted with anger to the reported designation of a new prime minister they regard as emblematic of a failed political system.

According to senior officials speaking on condition of anonymity and Lebanese press reports, key political players agreed that Mohammed Safadi should be tasked with forming the next government.

“Choosing Mohammed Safadi for prime minister proves that the politicians who rule us are in a deep coma, as if they were on another planet,” said Jamal Badawi, 60. Another protester said that as a business tycoon and former minister, Safadi epitomised the political class that the protest movement wants to remove.

“The economic situation has further deteriorated… The middle class has been obliterated,” said Khashan, a professor at the American University of Beirut.

“But I don’t think the government will collapse,” he added.

The central bank late Thursday hit out at “baseless” information on social media of “exchange rates at levels far from reality, which mislead citizens”.

Lebanon — one of the most indebted countries in the world with a sovereign debt of more than 170 percent of its GDP — went into default in March.

It started talks with the International Monetary Fund last month in a bid to unlock billions of dollars in financial aid. Dialogue is ongoing.

Unemployment has soared to 35 percent nationwide, with Lebanese living in the impoverished northern port city of Tripoli particularly badly affected.

Traders there called for a “general strike” on Friday over “heavy losses” and their “plummeting buying power”.

The country enforced a lockdown in mid-March to stem the spread of the novel coronavirus, dealing a further blow to businesses.

Lebanon has recorded some of the pandemic’s best-declared metrics in the Middle East, with just 1,422 cases of COVID-19, including 31 deaths.