U.S. Joint Chief says letter on troop withdrawal from Iraq was a ‘mistake’

The U.S Chairman of the Joint Chiefs, General Mark Milley, said that the letter informing Iraqi Govt. of withdrawal of US troops was sent 'by mistake'. The said letter and General Milley's subsequent statement on it has caused confusion on US military strategy in Iraq. 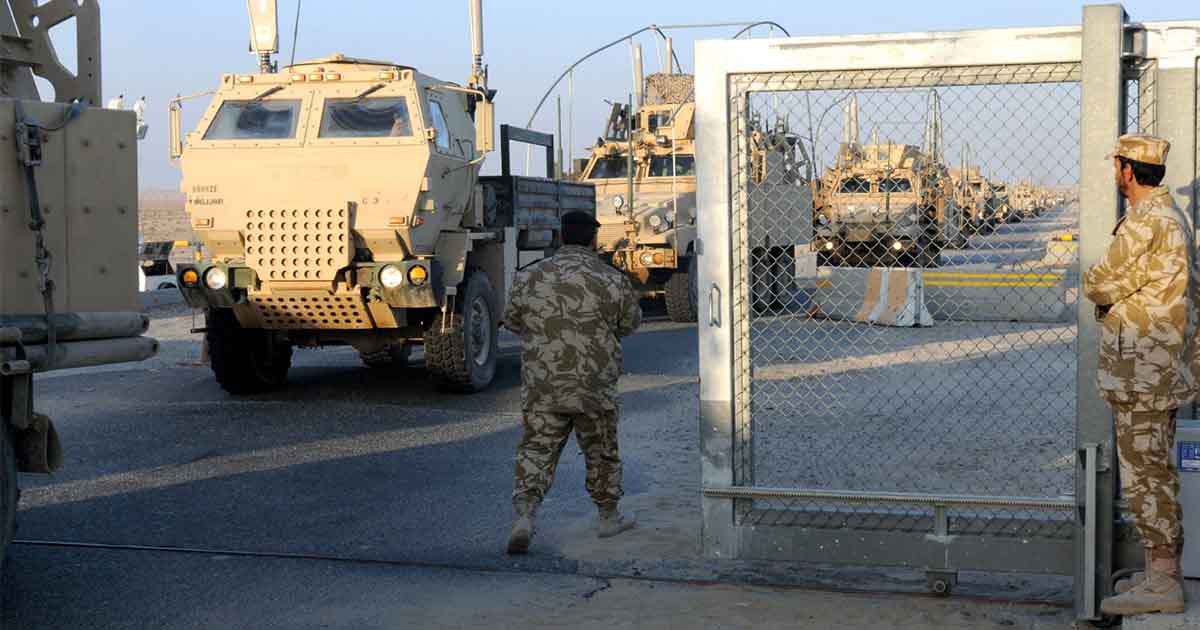 America’s military strategy in Iraq was thrown into confusion Monday as the Pentagon admitted a letter from a general informing the Iraqi government of an imminent US troop pullout was sent by “mistake.”

General Mark Milley, the Chairman of the Joint Chiefs, referred to the letter as ‘poorly worded’ and said that whilst the letter “implies withrawal, that is not what’s happening.”

The top US general says a letter suggesting the US would withdraw troops from Iraq was released by mistake and poorly worded https://t.co/7bF5s2QZ8m

The timing of this blunder, nonetheless, was lamentable for the Trump administration, as military authorities, alongside different individuals from President Donald Trump’s national security team, continue to face inquiries regarding the killing of top Iranian commander, General Qasem Soleimani.

The latest developments came as a sea of black-clad mourners in Tehran paid homage to Qasem Soleimani, the head of the Iranian Revolutionary Guards’ Quds Force who was killed in a US strike in Iraq on Friday.

US Brigadier General William Seely informed his Iraqi counterparts in a letter dated Sunday that American troops were preparing to leave Iraq. “We respect your sovereign decision to order our departure,” said the letter, whose authenticity was confirmed to AFP by both Iraqi and US defence officials.

Seely said the US-led coalition would “be repositioning forces.” “In order to conduct this task, Coalition Forces are required to take certain measures to ensure that the movement out of Iraq is conducted in a safe and efficient manner,” said the letter.

It said helicopters would be travelling in and around Baghdad’s Green Zone where the US embassy is located as part of the preparations. AFP could hear helicopters flying low over Baghdad throughout the night on Monday.

I Hope Iraq Has A Couch That Pulls Out, Because The US Military Sure As Hell Can https://t.co/YJT704XjeQ #PullOut #tcot #MAGA

But Pentagon Joint Chiefs Chairman Mark Milley said on Monday the letter was a mere “draft” and “should not have been sent.”

Read more: The End of US Influence in Iraq

“It was a mistake, an honest mistake, a draft unsigned letter, because we are moving forces around,” Milley told reporters in Washington.

US Defence Secretary Mark Esper said the letter was “inconsistent” with Washington’s position and denied there had been a decision to leave Iraq. The US drone strike that killed Soleimani, as well as Iraqi military commanders, has sparked fury in both Iran and Iraq, with Tehran vowing revenge.

Iraqi lawmakers on Sunday urged the government to oust all foreign troops from Iraqi soil.

Getting out of #Iraq and #Syria now is the only way that we're going to prevent ourselves from being dragged into this quagmire, deeper and deeper into a war with Iran. – Tulsi Gabbard #Tulsi2020 https://t.co/K07F38S0Fz

Some 5,200 US soldiers are stationed across Iraqi bases to support local troops preventing a resurgence of the Islamic State group. They make up the bulk of a broader coalition, invited by the Iraqi government in 2014 to help combat the jihadists.

On Monday, Iran’s supreme leader Ayatollah Ali Khamenei fought back tears as mourners flooded the streets around Tehran University to honour Soleimani. The targeted killing of the 62-year-old Soleimani saw Iran step back even further from the already tattered 2015 nuclear accord with world powers.

In an escalating war of words that has heightened international concern and rattled financial markets, Trump threatened yet more “major retaliation” if Tehran hits back, including strikes on Iranian cultural sites.

Writing in all-caps on Monday, Trump tweeted: “IRAN WILL NEVER HAVE A NUCLEAR WEAPON!”

#BREAKING : The US-led international coalition has announced the withdrawal of troops from #Iraq. According to the letter, the relocation will be carried out in the dark by helicopters CH-47 Chinook and UH-60 Black Hawk. pic.twitter.com/Snqws68coM

Iraq requested in a letter to the UN — seen by AFP — that the Security Council condemn the US drone strike, so that “the law of the jungle” was not allowed to prevail. The operation represented “a dangerous escalation that could lead to a devastating war in Iraq, the region and the world,” wrote the Iraqi ambassador to the UN, Mohammed Hussein Bahr-Aluloom.

NATO chief Jens Stoltenberg warned Iran must avoid “further violence and provocations” after the alliance held emergency talks in Brussels. “At our meeting today, allies called for restraint and de-escalation. A new conflict would be in no-one’s interest,” he said.

America’s military strategy in Iraq was thrown into confusion Monday as the Pentagon admitted a letter from a general informing the Iraqi government of an imminent US troop pullout was sent by “mistake.”

Saudi Arabia — an oil-rich US ally seen as vulnerable to Iranian counter strikes — also appealed for calm. The European Union, whose foreign ministers will hold emergency talks Friday, said it was in Iran and Iraq’s interest to “take the path of sobriety and not the path of escalation.”

#Us wanted 50% of #Iraq's oil and when they told them to fuck off the americans do as they do. Divide and conquer. Fortunately it failed miserably and had the averse effect. We are witnessing the demise of an empire. https://t.co/Adl8Gl8Bbc

EU diplomatic chief Josep Borrell said he “deeply regrets” Iran’s latest step back from the nuclear deal. The agreement had offered Tehran sanctions relief in return for curbs to prevent it acquiring nuclear weapons — but Trump’s withdrawal in 2018 dramatically weakened the deal.

Read more: Iran fights to push US out of Iraq

Despite its latest step, Iran insisted it would continue to cooperate with the UN agency overseeing its atomic programme.

The raw emotions sparked by the killing of Soleimani were on full display in Tehran, where state television said “several million” black-clad mourners filled the streets. “The last time I remember such a crowd was at Ayatollah Khomeini’s funeral 30 years ago,” said Iranian journalist Maziar Khosravi.

As they marched down a main artery of Tehran, the mourners chanted “Death to America” and “Death to Israel”. Soleimani, a beloved hero of the 1980s war with Iraq, will be laid to rest in his hometown Kerman on Tuesday.

Trump on Saturday issued a US strike list of 52 targets in the Islamic republic. “Those who refer to the number 52 should also remember the number 290. #IR655 Never threaten the Iranian nation,” Rouhani tweeted, referring to 290 lives lost in July 1988 when a US warship shot down an Iran Air plane in the Gulf.

Trump said his figure of 52 targets represented the number of Americans held hostage at the US embassy in Tehran for more than a year starting in late 1979. Amid the tensions in the oil-rich region, crude prices surged and most equities tumbled while safe-haven gold hit a more than six-year high.

World leaders and governments are highly concerned about the jingoistic statements from President Trump; the German Foreign Office said that “now its about preventing another escalation from setting fire to the whole region”, in a tweet on Saturday.

Soft Power: Japan has turned its culture into a powerful political tool