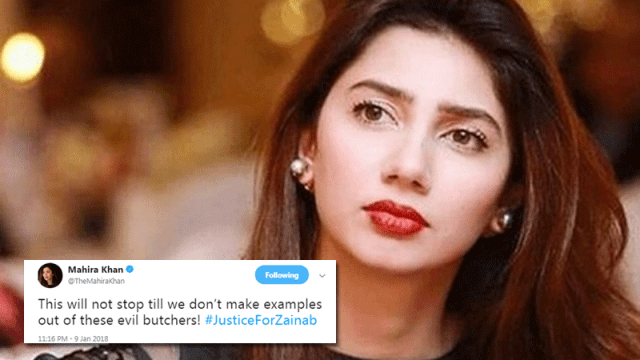 Mahira Khan along with other celebrities gave a strong message against child abuse. She joined the protest organized by the singer Juni Zayed against Zainab’s case of sexual abuse in Kasur.

The actress urged the government to severely punish the culprits.

She said, “sexual abuse is a taboo subject in our society. However, there is a need to change negative attitudes associated with sexual abuse.”

The actor despised the fact that every attempt to discuss sexual abuse in our society is suppressed in the form of bans.

But she believes that it’s the need of the hour to educate the children about a ‘bad touch’ and a ‘good touch’. Also, they must be encouraged to speak about it, if they encounter anything like this.

“Bachoun ko yeh parhana chahiye [Children should be taught this]. They should be educated about sexual abuse, the difference between a good touch and a bad touch. Kis cheez per aap apni awaaz uthayein [what they should raise their voice to]. That we should never associate being abused with shame. That nobody should be afraid of speaking up against abuse. The ‘log kya kahein gey’ [what will people say] mentality should just be chucked out of the window. And that’s very important.”

She has also demanded justice for Zainab and said that as a society we need to make sure that nothing as such ever happens again.

Read more: Kasur incident: What happened and what needs to be done?

The actress also said that mostly the victim is forced to remain quiet but there is a need to understand the fact that majority of the time, it’s someone close to the family who is the perpetrator.

Other notable social activists like Jibran Nasir and singer Shehzad Roy, too were part of the protest.

Zainab’s brutal murder and rape have shaken every Pakistani. Society needs to focus on how to combat paedophiles that unknowingly exist in our society.

Also, the law and justice system need to gear up so that effective conviction can thwart such harsh incidents in the future.

Mawra, Uzair are the official graduates of University of London