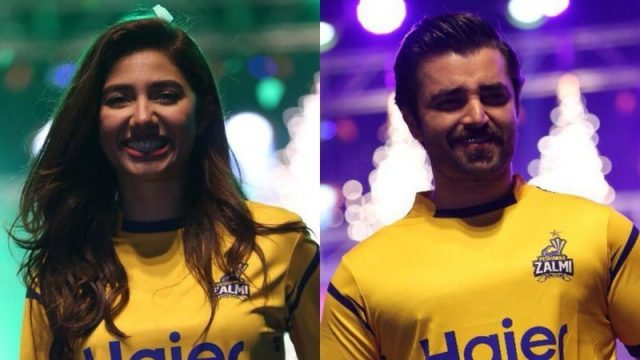 The team also launched their new kit and anthem for the third edition of the Pakistan Super League.

From Khirad of Humsafar to Aasiya of Raees, she has shone and will continue to sparkle. Welcoming our brand ambassador – the beautiful @TheMahiraKhan on board. #YellowStorm #HumZalmi #HBLPSL

The one who speaks his mind, the smartest and the talented @iamhamzaabbasi is our official ambassador for the #HBLPSL. #YellowStorm #HumZalmi

The stars of Peshawar Zalmi, including cricketers Wahab Riaz, Kamran Akmal, Hammad Azam and Mohammad Hafeez, were also present at the ceremony.

Peshawar Zalmi rose as a powerful team in the recent editions of the Pakistan Super League. It will be interesting to see if the team retains their title and once again displays a powerful performance in this season after Shahid Afridi’s departure to play from Karachi Kings.

Soon afterward the social media accounts of Peshawar Zalmi and the players of the team were flooded with pictures and videos from the event. Hamza Ali Abbasi shared a message in Pashto with his fans on Instagram.

Pakistan Super League will start later this month. The opening ceremony of the event will be held on February 22nd, 2018 in the United Arab Emirates.

Since the event is approaching, franchises participating in the event too have stepped up their promotional activities. Other teams including Karachi Kings and Multan Sultans too are heavily promoting their teams these days.