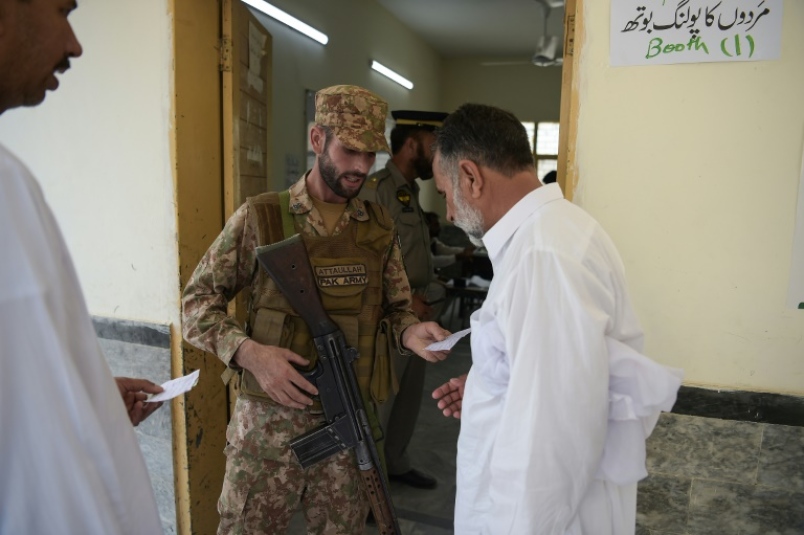 “Today what they have done has pushed Pakistan back 30 years… We reject this result,” Sharif, the brother of Pakistan’s jailed ex-leader Nawaz Sharif, told a press conference in Lahore. “People will not bear it,” he added. The election has been marred by widespread allegations of pre-poll meddling by the powerful military in favour of Khan, which saw the process dubbed Pakistan’s “dirtiest election”.

As election workers sorted through massive piles of paper ballots, other major parties including the Pakistan Peoples Party (PPP) also alleged the count was being manipulated. “My candidates complaining polling agents have been thrown out of polling stations across the country,” tweeted PPP leader Bilawal Bhutto Zardari, adding: “Inexcusable & outrageous”.

The PML-N says it is the target of the alleged military machinations. Nawaz Sharif was ousted from power last year and jailed over a corruption conviction days before the vote, removing Khan’s most dangerous rival.

In a WhatsApp message, the PML-N also claimed that security forces had taken over polling stations. The Election Commission’s secretary Babar Yaqoob flatly denied allegations of vote count manipulation. Shortly before Sharif spoke around midnight, state television said that just one fifth of the votes had been counted so far — an unusually slow count that further fuelled suspicions of rigging.

But Yaqoob said the vote-counting system, which he said was untested, had “crashed”, adding: “There is definitely no conspiracy, no one wants to influence the results”. Sharif vowed later via Twitter to use “all political and legal options for redressal of these glaring excesses”, adding that the party would meet on Thursday to decide a way forward.

“This is complete chaos,” analyst Azeema Cheema told AFP. “Too many parties are making the claim (of rigging)… They are all saying the same things: the established rules and procedures have not been followed, the army has kicked their polling agents out of the polling booths, and that they have been intimidated.”

PTI supporters were already celebrating in cities across the country, including Lahore, Islamabad, Multan, Karachi and Rawalpindi, with fireworks, dancing and reports of celebratory gunfire. “Imran is honest. He is a cool leader,” first-time voter Ammar Haider, 20, told AFP at a street celebration in Islamabad.

The election has been marred by widespread allegations of pre-poll meddling by the powerful military in favour of Khan, which saw the process dubbed Pakistan’s “dirtiest election”.

The rigging allegations came after a suicide bombing in the southwestern city of Quetta, claimed by the Islamic State (IS) group, killed at least 31 people near a polling station, casting a shadow over voting day. Wednesday’s vote was meant to be a rare democratic transition of power in the populous but poor nuclear-armed Muslim country, which has been ruled by the armed forces for roughly half its history.

The contest largely became a two-way race between Khan’s Pakistan Tehreek-e-Insaf (PTI) and the PML-N of ousted premier Nawaz Sharif, whose brother Shahbaz is leading its campaign. Bhutto — son of slain prime minister Benazir Bhutto — and his PPP could be called upon to form a coalition with any winner.

To form a majority government outright, the contest’s winner would need to snatch 137 seats. Gallup Pakistan estimated turnout at between 50 to 55 percent in an electorate of nearly 106 million, similar to the previous contest in 2013.

The most populous province of Punjab — which has 141 out of the 272 directly elected seats in the National Assembly — is a key battleground, analysts have said. Some voters in Lahore, capital of Punjab and traditionally a PML-N stronghold, said they were abandoning the party in favour of PTI.

“I have voted for PML-N my whole life but this time I voted for PTI because Imran Khan has promised free education and health,” said 75-year-old Uzma Akram. Up to 800,000 police and troops were stationed at more than 85,000 polling stations across the country, after a string of attacks targeting political events in the final weeks of the campaign killed more than 180 people.

Khan, 65, campaigned on populist promises to build a “New Pakistan” and vowed to eradicate corruption, clean up the environment and construct an “Islamic welfare” state. But his bid for power was dogged by widespread accusations he is benefiting from a “silent coup” by the generals.

Read more: Karachi: Who is going to win, why and how much?

The PML-N says it is the target of the alleged military machinations. Nawaz Sharif was ousted from power last year and jailed over a corruption conviction days before the vote, removing Khan’s most dangerous rival.

Can we live in Space?