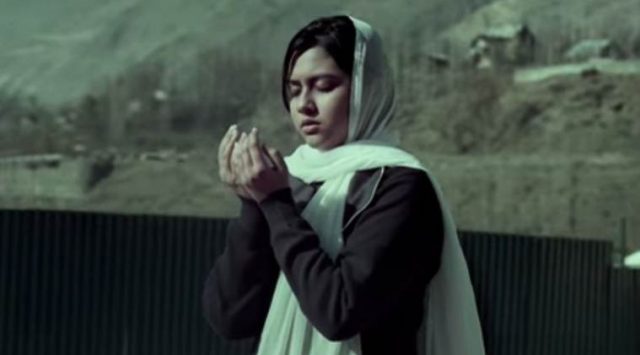 The first poster of a biopic movie Gul Mukai depicting the life of Pakistani education activist Malala Yousafzai has been released. The poster features Reem Sheikh as Malala Yousafzai. The team has also released a 16-second video that provides a brief idea of the movie.

The trailer comprises of a poster image and an audio message voiced by Kabir Bedi that speaks of the destruction caused by the Taliban militants in Afghanistan and Pakistan in the name of religion. Gul Mukai is a pseudonym used by Malala Yousafzai when she wrote BBC blogs back in 2002 during the control of Taliban militants in her hometown, Swat.

The Indian director Amjad Khan has directed the movie. The movie has been shot in Kashmir. Gul Mukai is intended to honor the struggles of Malala Yousafzai against the tyrant militants. It celebrates her efforts and determination towards girl’s education and their empowerment.

Read more: Malala Yousafzai took a dig at Trump’s policies in a Netflix…

The official synopsis of the film reads, “Gul Makai accounts the courageous journey and struggle of Nobel laureate Malala Yousafzai, from her humble upbringing in the Swat Valley to her becoming the champion for free education to all. Gul Makai is a small tribute to this lion-hearted girl who is in every essence a global citizen championing a cause that transcends boundaries, caste, religion, and geography.”

The cast includes Divya Dutta, Mukesh Rishi, Reem Khan, Abhimanyu Singh and Ajaz Khan. The date for the release of the movie has not been revealed yet.

Following the West, India is also playing its role in honoring a teenage girl from Pakistan who has become a champion of female education. Malala Yousafzai, the youngest Nobel Laureate is has been urging the world leader’s to prioritize female education.

In her several speeches, she has reiterated to further her cause of female education after completing her degree from the University of Oxford in the UK.