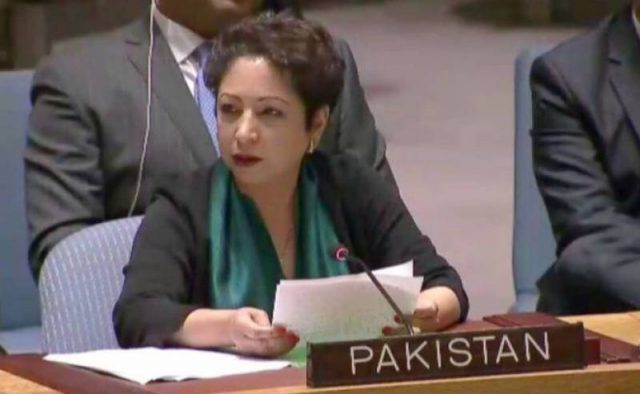 Read more: “We fight for our national interests and principles, not for aid”,…

Ms. Lodhi also affirmed Pakistan’s democratic stance during the interactive session of the first meeting of the Intergovernmental Negotiations on Security Council Reform at the beginning of February. Such negotiations began in earnest in 2009. The agenda of the meeting was “Question of equitable representation on and increase in the membership of the security council and related matters.”

The president of the 72nd General Assembly of the United Nations, Miroslav Lajčák, also expressed his support for the much-needed reforms when he said, “We need a Security Council adapted to today’s world. It relates to the lives of people. It affects the credibility and relevance of the General Assembly.”

In a separate press release by Pakistan’s mission to the UN, Maleeha Lodhi said UN Council is to be reformed on the principles of democracy. Anything less would mean that the reform of the Council seeks to address its existing dysfunctionalities by merely reinforcing them.

Primary responsibility for maintaining international peace and security was given to the UNSC, which may come into session whenever peace is threatened. In other words, the Security Council is the United Nations’ primary crisis management body and is empowered to impose binding obligations and, if need be, sanctions to maintain peace.

The victors of Second World War signed the charter of UN and declared themselves to be permanent members that can veto any resolution. The permanent members include France, UK, China, Russia and the United States. The ten non-permanent members are elected for a term of two years by the UN General Assembly on a regional basis.

Prior to 1966, there used to be six non-permanent members. Presently, the non-permanent members include Bolivia, Ethiopia, Kuwait, Netherlands, Poland and Sweden among others. Pakistan has been a non-permanent member of the UNSC seven times, most recently from 2012 to 2013. The predecessor to the United Nations, the League of Nations, failed because every decision had to be taken unanimously and there was never any real consensus. Perhaps, this is why veto powers were incorporated into the UNSC.

In Burma, ‘ethnic cleansing’ against Rohingya Muslims was condemned by the UN but no further action has been taken.

However, the Security Council has come under immense criticism, especially since the end of the Cold War. Veto powers, more often than not, have become geopolitically convenient tools in the hands of great powers and have resulted in various deadlocks and failures to maintain peace. In the Syrian civil war, UNSC resolutions were vetoed continuously while civilians were dying by the hundreds of thousands.

In Yemen, the war continues and the UN has been little more than a spectator. In Burma, ‘ethnic cleansing’ against Rohingya Muslims was condemned by the UN but no further action has been taken. There are various other examples of UNSC failure over the past few decades. Reforms in the Security Council have become a necessity.

Some countries hope to become permanent members of the UNSC-namely India, Japan, Brazil and Germany. These nations see their permanent membership at the UN Security Council as a means to reform. But the problem is that this would merely perpetuate the status-quo. It could potentially make things worse as more members with veto power would lead to more deadlocks, a situation not so dissimilar to the functioning of the now defunct League of Nations. Not only is such a proposition impractical, it is also undemocratic. This is what Pakistan’s representative at the UN has been stressing upon.

“We all agree on practicing democracy at home but some argue against it at the UN”, Maleeha Lodhi said. She further added, “The argument that is put forward by some when translated in our national context means that governments should be permanently installed by virtue of a single election. In other words, we should have a permanent prime minister and permanent members of Parliament.” “We will continue to uphold values of democracy, equal opportunity, and non-discrimination for as long as it takes, but we will not be complicit in any exercise that places narrow self-serving interests of a few over the collective good of the larger UN membership,” the Pakistani envoy stressed.

The UN General Assembly is representative of the global population and it should also be reformed to enable it to take up some responsibilities that are currently assigned to the dysfunctional UNSC. Within the UN General Assembly, each country has one vote. This is problematic because the votes of countries with very high population levels-such as China or India with over a billion people each-are equal to the votes of countries which have small population levels-such as Greenland, with less than a hundred thousand people. In other words, the voice of a billion people is not greater than the voice of a few tens of thousands.

A formula for proportional representation at the UN General Assembly may also be worked out in order to make the assembly more responsive to global security concerns.

Previous articleTurkey expects Iraq to clear the Kurdish mess
Next article“Corruption case against me and my family is a fraud”, says disqualified Nawaz Sharif

24 June 2021
Previous articleTurkey expects Iraq to clear the Kurdish mess
Next article“Corruption case against me and my family is a fraud”, says disqualified Nawaz Sharif