Maulana Fazal Ur Rehman, politically defeated, is now trying to topple the government?

Maulana Fazal Ur Rehman, Leader of Jamiat Ulema Islam-Fazal (JUI-F), called for street agitation against the current government and its policies. While rejecting the budget presented by the present government, he stated that the current administration is ‘fake’ and his political party would wage country-wide protests against it. 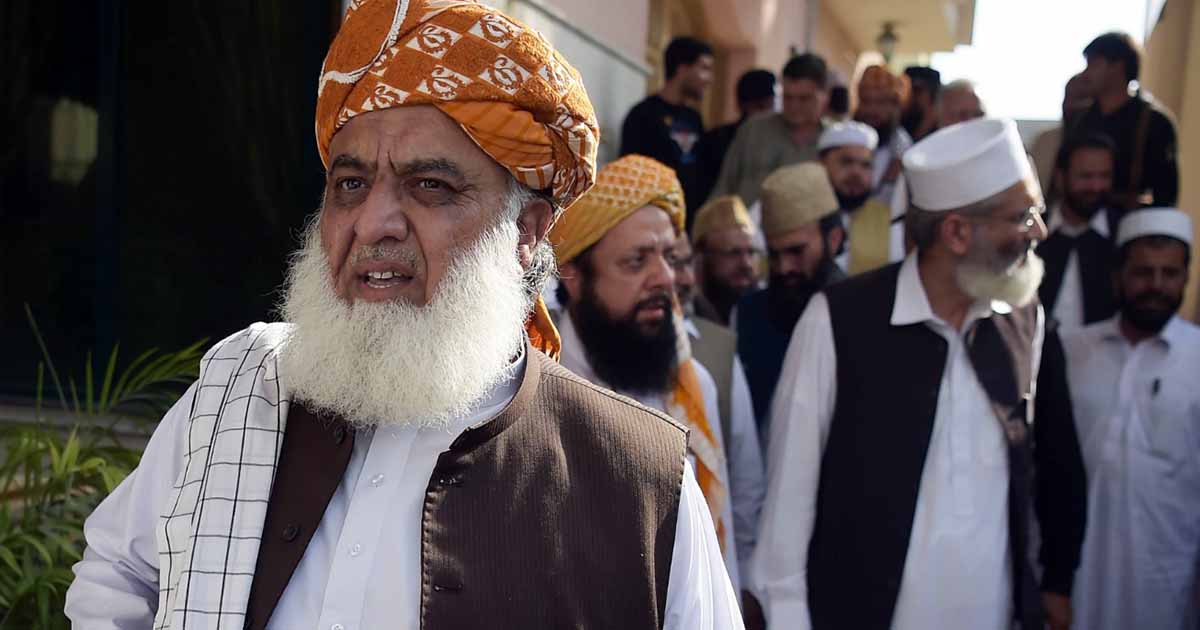 Fazal added that he was holding consultative meetings to decide upon locking down the capital and further deliberations upon street agitations were expected in the upcoming All Parties Conference (APC). JUI-F chief has stated more than once that the government is a sham and deserves not to be in the office. The leader of JUI-F also demanded the resignation of the Chief Election Commission of Pakistan (CECP) for his alleged failure to conduct free and fair elections in the country.

Initially, Maulana was not ready to accept the electoral results where his party was whitewashed at the hands of PTI. “Parties have not accepted the result of the polls. There is still time for the election commission to accept its failure and the chief election commissioner to tender his resignation,” said Rehman.

It is believed that Maulana is trying his best to bring the PPP, PML-N and other opposition parties at the same page and encourage them to topple the incumbent government.

It is important to mention here that Maulana presided over a meeting of multi-conference after the ‘unprecedented’ electoral win of PTI. But soon after the meeting, PPP decided not to reject the elections and formed a government in Sindh. Similarly, the PML-N made all efforts to form its government in Punjab, but of no use. The MQM-P, PML-Q and other parties from Baluchistan and GDA became the part of the ruling alliance.

Despite all criticism and upright refusal to accept the legitimate right of the present government to rule the country, Maulana was the joint presidential candidate of the opposition parties except the PPP. Maulana, however, remained unable to show any impressive performance since the lawmakers within the PML-N were not happy over his nomination.

Muttahida Majlis-e-Amal (MMA), an alliance of the five Islamic parties – JUI-F, Jamaat-e-Islami, Markazi Jamiat Ahle Hadith, Islami Tehreek and Jamiat Ulema-e-Pakistan – could manage to get a dozen Provincial Assembly seats mainly from the traditional stronghold of Khyber-Pakhtunkhwa (K-P)., whereas, the ruling party in KPK, PTI, managed to get 66 seats. It is important to mention here how it is for the first time in the history of Pakistan that a single party got elected for the second time from KPK.

Interestingly, Awami National Party leader, Ghulam Ahmed Bilour, has conceded openly and termed Imran Khan as a “popular leader”. “The results indicate that Imran Khan is a favorite leader of the people of Khyber Pakhtunkhwa. I am a democratic person and I admit the defeat,” Mr Bilour said.

It is believed that Maulana is trying his best to bring the PPP, PML-N and other opposition parties at the same page and encourage them to topple the incumbent government. But analysts believe that Maulana, like a wounded lion, may cry for a while but cannot get things done immediately. The future will decide the fate for both Maulana and the government.

News Desk - 29 May 2021
Popular, video-sharing application TikTok has blocked up to 8 million objectionable videos and blocked 400,000 accounts for uploading these in the country, informed PTA...

“Only way to break the Status Quo”: PM stresses on Local Bodies empowerment

Article 35-A: Court’s move could be problematic for Indo-Pak relations

Kalabagh Dam: A necesaity rather than a luxury