Maulana Fazl-ur-Rehman to head revived MMA: What does it mean? 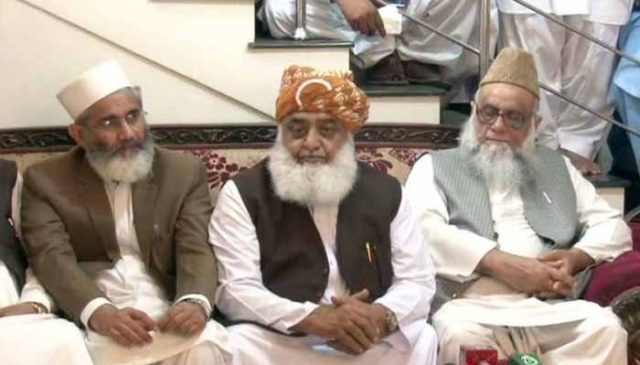 The Jamiat Ulema-i-Islam-Fazl (JUI-F) chief Maulana Fazlur Rehman was made the president of the newly revived Muttahida Majlis-i-Amal (MMA) on Tuesday. Jamat-i-Islami (JI) leader Liaquat Baloch was selected as the new general secretary of the party. Fazlur Rehman announced that all five parties under MMA will contest the 2018 general elections under one banner, one flag, and one manifesto. The manifesto will be announced in the first week of April.

Fazl further stated that they will contact other parties for possible coalitions and seat adjustments in the elections. He expressed his resolve to implement an Islamic system in the country to resolve national issues and protect the rights of minorities, oppressed and deprived classes of the society. MMA was revived on 13th December last year with the merger of 5 parties: Maulana Fazlur Rehman’s Jamiat Ulema-i-Islam-Fazl, Sirajul Haq’s Jamaat-i- Islami (JI), Allama Sajid Mir’s Jamiat Ahle Hadith (JAH) and Allama Sajid Naqvi’s Tehreek-i-Islami (TI).

The MMA was first formed in 2002 with the backing of the military establishment. It was formed in a direct opposition to the then President General (retd) Pervez Musharraf’s policy to assist the US in its war on terror in Afghanistan but despite its apparent anti-military rhetoric, it was greatly backed by the establishment and government’s policies. It was greeted well by the people of Pakistan and enjoyed a lot of support. They managed to form their government in Khyber Pakhtunkhwa (KP) in 2002 general elections.

However, the glory of the MMA was transient and it started to lose public support because of their inner conflicts and lack lust performance in the province. Another alliance formed at that time, Alliance for Restoration of Justice, to counter the military regime was another major reason that MMA lost its holding among the people. It finally collapsed in 2008 and JUI-F joined the PPP government and adopted an anti-military stance.

Read more: Fraud of Calibri Font: Disinformation and Cover Up by Pakistani Media?

Why was the MMA revived?

Back in 2002, MMA was established by the establishment to fill the void created by the two major political parties PML-N and PPP after their leadership went to self-exile. The JUI-F chief Fazlur Rehman has adopted an anti-establishment stance ever since the collapse of MMA in 2008 and sided with the PPP in 2008 and later with the PML-N in 2013. He has been close to anti-establishment groups like Hasil Bizenjo’s National Party (NP) and Mehmood Khan Achakzai’s PkMAP.

Political analysts believe that the establishment is not behind the MMA this time. It appears to be an internal strategy of the allied parties. MMA belongs to the Deoband school of thought and 2017 has seen a strong revival of the Barelvi school of thought. Pakistani politics has long been dominated by the Deobandis even though they are not in the majority. The reason for this is that Barelvis in Pakistan were never united under group and mostly consisted of individual pirs who shifted alliances according to the need of time.

For the first time in the history of Pakistan, Barelvis have found a central leadership in the form of Tehreek-i-Labbaik (TLY) and the spectacle in Faizabad last year is a testimony of their strength. Their extraordinary performance in the by-elections also proved that the new group is here to stay. Other religious parties felt threatened by this Barelvi revival and sought to consolidate their own strength in the form of mergers and coalitions.

Most parties in the MMA have a divided but constant vote bank all over Pakistan. Uniting their vote banks will help them win more seats in the upcoming elections. Their merger also suggests that the leadership of JI and JUI-F is aware of the dynamics of the 2018 general elections. Political commentators are of the opinion that no party will be able to get a simple majority in the upcoming elections and the new government will be a coalition government. MMA will help its parent parties to be in a stronger position for the negotiations.

JI and JUI-F also disagree on FATA reforms, while the first one is a staunch supporter of FATA’s merger with KP; JUI-F has been a firm opponent of the FATA merger. The manifesto of the party is coming out next month and it is not yet clear that how these differences will be resolved by the MMA central leadership and what points will be adopted.

Panama Saga: Dethroning of a king by a court

Pakistan’s Abaya compulsion in schools: Can it protect females from harassment?