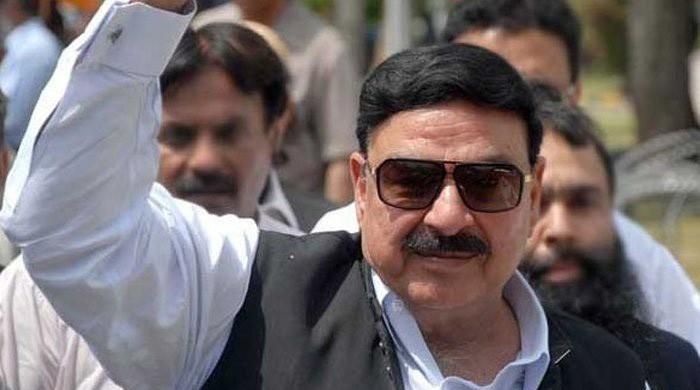 Mayhem ensued in the National Assembly on Friday after Syed Khursheed Shah, Leader of the Opposition, accused the government of dispatching a Pakistan Muslim League-Nawaz (PML-N) office-bearer to attack Awami Muslim League chief Sheikh Rashid in front of the parliament building a day earlier.

On Thursday, Mr. Rashid was subjected to a public verbal assault by Malik Noor Awan, president of the PML-N’s Japan chapter, as he was exiting the parliament. Mr. Awan was arrested and later released on bail.

Mr. Awan, an automobile importer, claimed that Mr. Rashid owed him Rs2.2 million as payment for a car the MNA had bought a while ago.

All hell broke loose after Minister of State for Water and Power Abid Sher Ali and MNA Abdul Manan erupted with hue and cry from the treasury benches.

He said that he understood that a many people manage to get their photographs taken with important politicians, “but they cannot take those pictures in the offices of the president and the prime minister. It shows that attacker is so close to the rulers that he has access to their highly secured offices”.

As he brought out the photographs, all hell broke loose after Minister of State for Water and Power Abid Sher Ali and MNA Abdul Manan erupted with hue and cry from the treasury benches.

Mr. Shah responded saying, “When Abid Sher Ali was mistreated by [former president] Musharraf we were standing here in front of the speaker’s podium. We raised our voice in support of Abid Sher Ali’s father.”

The opposition leader said when his party was in power, it gave due respect to the opposition and never interrupted the leader of the opposition. “New traditions are being adopted by the ruling PML-N in parliament which can also be used against it one day. If this continues no one will be able to speak on the floor of the house,” he added.

As both members of the opposition and treasury benches leveled allegations and shouted slogans against each other, Speaker Sardar Ayaz Sadiq intervened and suspended proceedings for 15 minutes.

When the proceedings resumed, Mr. Shah said that Mr. Awan had been able to enter the parliament because he was in possession of a permission slip issued by Deputy Speaker Murtaza Javed Abbasi. He said Mr. Awan had entered the parliament without permission but was issued the slip from the office of the deputy speaker after he had carried out the attack on Mr. Rashid. “Mr. Speaker, please look into why the permission slip was issued by the deputy speaker after the incident,” he requested.

Mr. Abbasi denied that he had issued a permission slip, however, conceded that it had been issued from his office. Minister of State for Interior Baleeghur Rehman said that the authorities had taken prompt action against the attacker and registered a case against him. He said that Mr. Awan had been sent behind bars but was later released on bail.

Following the proceedings, Mr. Rashid, who did not attend Friday’s session, told reporters in front of the parliament that he had submitted a privilege motion in the office of the speaker requesting necessary action against the deputy speaker for allowing the attacker in.

Separately, Mr. Shah requested the NA speaker to issue production orders for opposition leader Jamshed Dasti who was arrested on Thursday night on charges of water theft. However, the speaker said he could not do that as the rules only permitted him to issue such orders on the application of the victim alone.

Following the proceedings, Mr. Rashid, who did not attend Friday’s session, told reporters in front of the parliament that he had submitted a privilege motion in the office of the speaker requesting necessary action against the deputy speaker for allowing the attacker in. “If no action is taken against the deputy speaker, I will ask the opposition to launch a move of no-confidence against him,” he threatened.

He further stated that he had been receiving threatening calls and if something unfortunate happened to him, the prime minister and Punjab Chief Minister Shahbaz Sharif would be responsible for it.

Mr. Rashid said he did not know the man who had attacked him and who had claimed that he (Rashid) owed him Rs 2.2m.

US Secretary of Defence Jim Mattis arrives in Islamabad