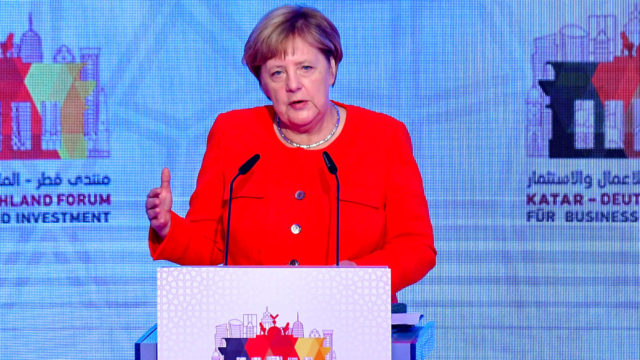 Wading into an issue that has reignited the immigration debate, agency chief Hans-Georg Maassen told the Bild newspaper that he had “no proof that the video circulating on the internet” showing what appeared to be immigrants being accosted and chased “is authentic”.

Maassen, in his post for six years, said he was sceptical about “media reports of right-wing extremist foreigner hunts in Chemnitz”, the eastern city that has seen several far-right rallies since the killing of a German man, allegedly by asylum-seekers, in late August.

Voters are dubious about Merkel’s immigration policy, with 69 percent saying in a survey for public broadcaster ARD that they think integration of newcomers is not working.

He even went as far as to suggest the video evidence might have been doctored, a claim that met with widespread disbelief. “Based on my cautious assessment, there are good reasons to believe that this was intentional false information, possibly to detract attention from the murder in Chemnitz,” he said.

Maassen offered no evidence for his theory. Until now, only far-right supporters had claimed on social media that the video in question was a fake. Extremist groups and thousands of local citizens took to the streets in the days after the stabbing, with a number of participants shouting anti-foreigner slurs and flashing the illegal Nazi salute.

In a spasm of violence that shocked the country, marauding mobs also assaulted reporters and police. There was yet another rally on Friday evening, with the call from the anti-immigrant group “Pro Chemnitz” attracting around 2,000 people to the eastern city. Some bore banners reading “we are the people” and chanted “Merkel must go.”

One demonstrator, Daniel Reichelt, 55, said “we are not Nazis” and suggested that there were “more foreign killers than German ones as they don’t have work.”

Hate in the Streets

The day after the first Chemnitz demonstration on August 26, Merkel’s spokesman Steffen Seibert quickly condemned the scenes, speaking of protesters “hunting down” foreigners. Merkel herself has repeatedly used the phrase in the ensuing heated debate, adding that “hate in the streets” has no place in Germany.

However, this week the premier of Saxony, Michael Kretschmer, pushed back against the accounts of events in his state, telling the regional assembly there had been “no mob, no hunting of foreigners and no pogroms”. Seibert declined to comment directly on the controversy, stating only that “we have said everything there is to be said”.

Read more: Hate in the streets has no place in Germany: Merkel

But Maassen’s comments drew fire from the government parties and the opposition, with the ecologist Greens calling them “frankly absurd” and a “frontal attack” against Merkel. The Social Democrats, junior partners in Merkel’s coalition, urged a thorough parliamentary investigation of the claims, while the far-left Linke demanded Maassen’s resignation.

Police said that several people had come forward saying they were assaulted, including a Syrian, a Bulgarian and an Afghan.

One demonstrator, Daniel Reichelt, 55, said “we are not Nazis” and suggested that there were “more foreign killers than German ones as they don’t have work.”

A freelance journalist working for the weekly Die Zeit who was at the August 26 protest posted videos on Twitter and several tweets describing demonstrators aggressively running after people who appeared to be non-German and hurling xenophobic insults. A video by an anonymous user showing such scenes was widely picked up by other media outlets and human rights groups.

An analysis of the video commissioned by ARD public television concluded Friday that based on weather conditions, geographic data and corroborating reports by journalists and other witnesses, it was most likely authentic. It also cited similar videos posted on far-right pages on Facebook.

Mother of all Problems

The highly unusual open clash between Merkel and Maassen comes as a recent tense truce within Merkel’s government over immigration that had held since July crumbled over the turmoil in Chemnitz. On Thursday, Merkel’s hardline interior minister Horst Seehofer, her most vocal critic within the cabinet, defended the protests and blasted immigration as “the mother of all political problems”.

In a policy that proved divisive, Merkel in 2015 allowed in more than one million asylum seekers when other EU states moved to shut them out. Voters are dubious about Merkel’s immigration policy, with 69 percent saying in a survey for public broadcaster ARD that they think integration of newcomers is not working.

In a speech Friday, President Frank-Walter Steinmeier urged Germans to stand up to extremism, saying the “contempt for democracy” seen at some protests reminded him of the chaotic conditions of the between-the-wars Weimar Republic. “A country with our history must never forget that,” he said.

Coronavirus on fire: Claims lives of thousands as Trump’s hope gets fade

Smugglers pave path for migrants from Africa to Europe