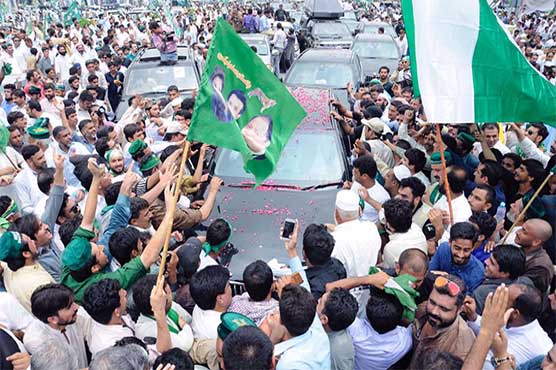 Former Prime Minister Nawaz Sharif has already begun his journey from Islamabad to Lahore after being ousted by 5 member bench of Supreme Court in the infamous Panama Case. Yesterday, his cavalcade was able to move from D-Chowk in Islamabad to Punjab House in Rawalpindi (20-25 Km’s), where the former premier decided to spend the night.

This cavalcade is set to continue its journey to Lahore today. According to various political analysts, Mr. Sharif has finally decided to publically confront all the ‘conspirators’ who contrived to oust him from the Prime Minister office.

Nawaz Sharif gamble doesn’t seem to be paying off. If chatters from the N-camp are any guide then this excursion is a very dangerous one

The refusal of PML-N leadership to accept the Supreme Court’s decision, their criticism of MI and ISI officials in JIT and its decision to support, finance and facilitate Nawaz Sharif’s journey from Islamabad to Lahore despite danger of it fanning unrest in country and stimulate confrontation among institutions, indicate that the incumbent ruling party has finally identified the real culprits behind the Panama gate scandal.

These conspirators according to the PML-N leadership are Supreme Court of Pakistan which disqualified Nawaz Sharif without evidence and the military establishment which according to PML-N has conspired to endanger democracy by ousting Nawaz Sharif. The narrative has buyers in Asma Jehangir, Maulana Fazl ur Rehman and the entire Jang Group.

How successful was the first day of Nawaz Sharif’s Yatra?

The government seems to have invested heavily in Nawaz Sharif’s gamble to gather public support in his favor by kicking off a defiant procession to Lahore via GT Road. DC’s, AC’s, DPO’s, District Administrations, Patwari’s and PML-N party officials and workers were instructed to make arrangements to ensure maximum participation of public along the entire length of this journey.

Much to the dismay of the opponents, the ruling party has so far maintained its unity and shows no signs of disintegration

Much to the dismay of PML-N, the public participation on the first day was minimal. According to various independent sources, between five to seven thousand people were part of this procession in Islamabad which swelled to almost ten thousand when the rally entered Rawalpindi.

The PML-N leadership expected to gather at least a 1,00,000 people on the very first day which it could not. This pressurized the government ministers who are part of the GT Road yatra to slow down the excursion and gain time to ensure increased numbers in the coming days of this voyage, experts say.

Late at night, when the cavalcade reached Committee Chowk, the ousted Prime Minister while speaking from inside a purpose built shipping container to his supporters said that the ‘people of Rawalpindi have rejected his ouster from power’. ‘The decision of the people of Rawalpindi is the verdict of entire country’, he added.

Experts also believe that this show of force might also be used to coerce the military establishment to strike a deal, a second NRO, to bail out Nawaz Sharif

The emotional Nawaz Sharif criticized the top court’s decision to disqualify him. “There is no case of financial corruption against me. Not even a charge. I have been dismissed for not claiming salary from the company of my son,” he said.

Read more: Of sit-ins and rallies: the politics on the roads

Objectives behind the long march

Political pundits are of the view that the ousted premier Nawaz Sharif has embarked on this decisive long march with multiple objectives in mind, the successful achievement of which is vital to the survival and unity of the ruling party.

According to them, the first and foremost aim of this rally is to gain public sympathy in Nawaz’s favor by selling the view that he has been ousted by the Supreme Court on the mere inference of not receiving the salary from the company of his son which is repugnant to the basic principles of law.

This, in turn, will be used to pressurize the apex court to overturn its decision when PML-N lawyers will file a review petition requesting the formation of the full bench instead of 5 member bench which disqualified Nawaz Sharif at the first instance.

The PML-N leadership expected to gather at least a 1, 00,000 people on the very day which it could not

Another objective of this rally is to influence the NAB court proceedings through a show of force. If the NAB functions according to the Supreme Court’s instructions and under the supervision of SC judge, many revelations will surface which will considerably tarnish the image of Sharif family which it can rarely afford at this juncture, experts say. Threats, coercion, and intimidation through a show of force might be used to prevent the NAB courts from doing that.

Experts also believe that this show of force might also be used to coerce the military establishment to strike a deal, a second NRO, to bail out Nawaz Sharif. This can possibly be done by instigating violence which will pressurize the already over stretched military to look for a way out of this political turmoil. Shahbaz Sharif has already made contacts with GHQ, but it has so far maintained its neutrality. Any unrest in the country might force the military leadership to bail Sharif family out of these difficult times.

Why is this ‘Long March’ important for the ruling party?

Since the disqualification of Nawaz Sharif, PML-N is under great pressure. The ruling party, tactfully embroiled Imran Khan, the major force behind ensuring impartial investigation of Sharif family’s assets, in Ayesha Gulalia’s scandal which provided some breathing space to it. However, Khan is expected to recover from ‘Ayesha’s Shock’ soon and make political gains at the expense of PML-N.

Fears of divisions among the ruling party surfaced well before the announcement of the Supreme Court decision. Much to the dismay of its opponents, the ruling party has so far maintained its cohesion and shows no signs of disintegration. However, next general elections are less than a year away.

If Imran Khan continues to make political gains, many disgruntled MNA’s will prefer to join PTI. PML-N core members seem to have realized it already and have decided to embark on this risky ‘Yatra’ to garner public support and to send a message to party’s rank and file that it is going to win the next elections.

If this gamble fails, PML-N might disintegrate like it did in 1999. The success of this long march will ensure that this doesn’t happen.

So far, Nawaz Sharif’s gamble doesn’t seem to be paying off. If chatters from the N-camp are any guide then this excursion is a very dangerous one. The 67-year old is all pumped up to re-establish himself as a torch-bearer of civilian supremacy. Wearing the tag of a political martyr may very well be Nawaz’s best bet to garner his non-existent legitimacy.