Modi’s populism or Imran’s humanity: What went wrong for BJP? 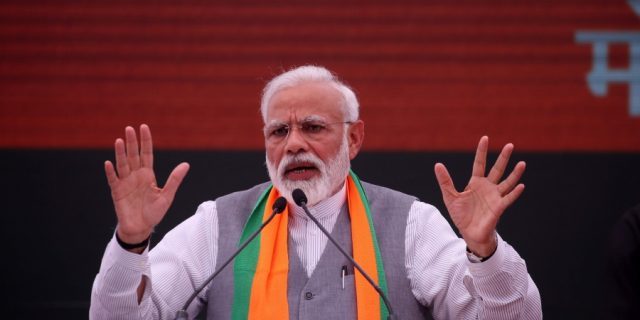 Considering the level of success that populism has in contemporary politics, it must have seemed like a sane idea to Indian Prime Minister Narendra Modi, the man who reintroduced India on a global level through a notorious and multi-faceted Foreign policy. He signed defence deals, sent ambassadors abroad, shook a lot of hands and made his share of reluctant embraces.

And therefore it must have seemed just right to Modi to stage a surgical airstrike while shunning the cost of making an actual military intervention across borders. After all, it was against the enemy whom he has been scapegoating successfully since getting elected, to brush off his own scandalous association with RSS and absolute administrative failure in Jammu and Kashmir, under the rug.

Khan who himself has been accused of being a Populist somehow seem to walk the fine line between Populism and Fascism, a manoeuvre Modi failed miserably at.

The scene was all set, with less than two months from the general election in the largest democracy of the world, no measure is desperate enough. Not even cashing the anti-Pakistan sentiment from amongst a potential vote bank which has been conditioned through mass media to hate, demonize, and belittle, the other side of the border. If Trump got away with it why can’t Modi? The apparent plan was to go off for just a few kilometers across the disputed territory which does not hold the status of an internationally recognized border.

With the elections this near and Pulwama still fresh a wound on Indian integrity, who would have time and patience to get into the nitty-gritty. Who gives a damn about the truth after all! What nobody saw coming dare I say not even the Pakistan Air Force, was that in exchange of reluctant dropping of payload over a bunch of trees, India will have to pay for two fighter jets, possibly the life of at least two combat pilots and the humiliation to watch a wing commander being captured and then rescued by the enemy.

It happened too swiftly, to be honest, but the tables often turn ironically in times of war. As pointed by Prime Minister Imran Khan, who knew how it shall end…. For Modi at least it evidently ended in irony with every sense of the word. Just as it was dawning on the Indian public that it has lost national assets of great financial and strategic value without knowing what exactly the IAF has done across the LOC to balance the scales with Pakistan: BJP mentions the potential 22 seat win which the air strike could materialize for them.

Now for a moment just put all the variables in equation here: Modi was a few points up initially in terms of winning national sentiment. He thought of imparting damage which was apparently too minimal to inspire any significant counter-attack from Pakistan, while remaining in the grey area in international legal domain on accounts of just a few kilometers violation of borders, not targeting any civilian or military targets in case this gets taken up in any international court.

Pakistan releases the Pilot in an attempt to de-escalate the conflict ladder, and with this Modi’s misadventure to hijack India’s general elections via populism by capitalizing on the corpses of soldiers killed in Pulwama dawn on the entire world.

This could be seen as a final gesture of his alliance in war against terror before leaving the PM office, for dear Americans which the entire Indian nation seems too eager to impress lately: something they have been accusing Pakistan of repeatedly since late.

And now for the other unforeseen side of equation: in less than 48 hours from the stunt of airstrike IAF loses two aircrafts and a bunch of pilots missing, Pakistan has an Indian wing Commander in its custody and a blazing jet as enough proof of its case, the PM and Military spokesperson take nation in confidence unlike Modi who is nowhere to be seen, Indian media is being countered by Pakistani and international coverage of the event based on hard facts, their minister hints at the political value of the air strike, and  the poor pilot ends up having our cup of tea instead.

Within days the opposition led by Rahul Gandhi asks the Government to share evidence of damage done in surgical strikes. Trump seems a bit indifferent to the whole thing initially and later looks a little flabbergasted while stating that news of de-escalation is coming. China, Russia, and Turkey refuse to take India’s side, India walks into Organization of Islamic Cooperation only to walk out with a resolution passed against it mentioning its atrocities in Indian Occupied Kashmir as acts of terrorism, Indian press has a major fall out with TV channels, questioning and pressurizing the government for explanations.

The likes of Shashi Tharoor post the BJP comment of 22 seat win as a consequence of air strike with the caption of ‘Shame’, Indian Celebrities which usually show blatant and at times misplaced nationalism go lull. Meanwhile, the military chiefs from the Indian side in a press conference fail to share convincible evidence of damage embarked while admitting the extent of strategic loss borne by IAF. Pakistan releases the Pilot in an attempt to de-escalate the conflict ladder, and with this Modi’s misadventure to hijack India’s general elections via populism by capitalizing on the corpses of soldiers killed in Pulwama dawn on the entire world.

If this was a Modi’s attempt on populism, then returning the pilot surely sabotaged it by neutralizing Modi’s hate-driven popularity in India, through peaceful means.

For Modi at least all that could go wrong did go wrong, and as for Khan: well he was able to come out of the first major crisis in his tenure without any scratch so far, the only thing that went astray for him was perhaps that his attempt to humanize the enemy, went unapplauded and unreciprocated at the other side of the border. Khan who himself has been accused of being a Populist somehow seem to walk the fine line between Populism and Fascism, a manoeuvre Modi failed miserably at.

As Modi leaves office amidst this mess, it is difficult to say how this episode shall impact the election outcome for India. Imran, however, was able to make a new kind of invisible surgical strike (which India seem to be attempting at lately only to fail miserably): where he was able to significantly bring down the popularity mark of a strategic rival, if not winning acceptance for his gesture of peace, across the border.

What Modi tried to achieve by an act of apparent aggression was countered by Imran by an apparent gesture of peace. If this was a Modi’s attempt on populism, then returning the pilot surely sabotaged it by neutralizing Modi’s hate-driven popularity in India, through peaceful means. At least, for now, peace somehow won, unlike it ever did since the inception of these states on world map.

Noorulain Naseem is a political analyst and has worked as a researcher for thinktank based in Islamabad. The views expressed in this article are the author’s own and do not necessarily reflect the editorial policy of Global Village Space.

AFP - 29 May 2021
Biden has wavered over the treaty and, in May 2020, castigated Trump for his plan to pull out, saying the then-president had "doubled down on his short-sighted policy of going it alone and abandoning American leadership."

Will Trump be left standing alone against North Korea?