Mohsin Abbas Haider responds to all the allegations made against him in a press conference, denying all charges put forward by his wife Fatima Sohail. 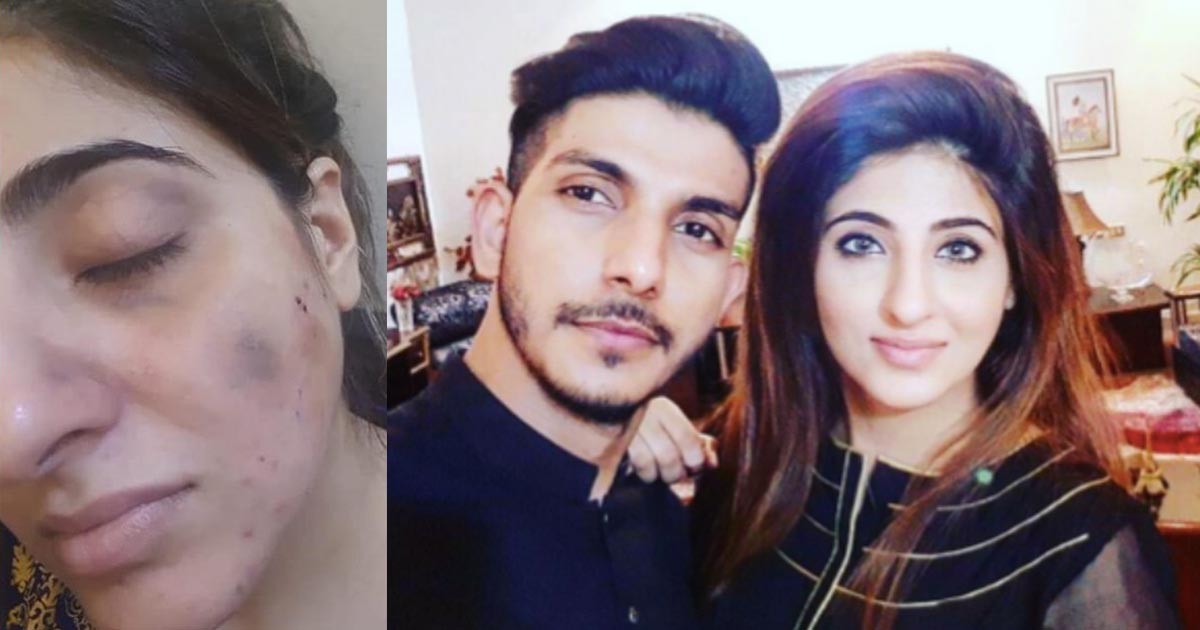 In a Facebook post, which surfaced on social media on Saturday night, Fatima detailed her harrowing experience of being subjected to physical assault by her husband, Mohsin Abbas Haider.

After three years of marriage Fatima bravely broke her silence on the issue. On Saturday, she applied to register an FIR against Mohsin Abbas Haider at the Defence C police station Lahore.

Senator Sherry Rehman also offered to help Fatima Sohail, stating that there are several legislatures keen to help the victims of domestic abuse.

The police accepted her application and registered FIR against Mohsin Abbas Haider for physically assaulting his wife.

“On 26th Nov 2018, I caught my husband cheating. When I confronted him, instead of being embarrassed he started beating me. I was pregnant at that time,” stated Sohail.

Sohail also posted the pictures of injuries and scars which she sustained during the physical assault as proof and revealed how fortunate she was that the baby was unhurt even after the attack.

Sohail tried to make her marriage work for the sake of the child and also pointed out the “societal pressure” involved in as well.

Social media heavily weighed in on the matter. Including celebrities, a large number of people rallied behind Fatima Sohail on social media.

Senator Sherry Rehman also offered to help Fatima Sohail, stating that there are several legislatures keen to help the victims of domestic abuse.

Heard this so many times in my life.
Why are so many women across the globe so clumsy? They keep falling down the stairs!!
Come up with an original excuse abusers #MohsinAbbasHaider https://t.co/IDryiwsLz2— Reham Khan (@RehamKhan1) July 21, 2019

Fatima, You are so so brave to come forward opening doors to Women of domestic violence please dont be scared anymore! Speak! ABUSE comes in many forms. physical, mental, verbal, economics, isolation. It is a sickness! What demons are you carrying? #MohsinAbbasHaider Get help! pic.twitter.com/gg02J2bmm8— Frieha Altaf (@FriehaAltaf) July 21, 2019

Growing up I remember, once my father got really upset when he saw my mother crying. Upon inquiring, he found out that one of our neighbor used to beat his wife. He went up to his house the same day and put him in his place. The guy was a wuss. #MohsinAbbasHaider shame on you!

The media and Showbiz industry Kings, the channel heads , the PR Gurus need to speak up in the favor of this girl @SohailFatema and announce a complete Ban on #MohsinAbbasHaider . #domesticabuse is a CRIME.— Rabia Anum Obaid (@RabiaAnumm) July 21, 2019

It's very simple his wife should go to court file charges put him in jail
We should not be asking for the other side of the story In a domestic battery and abuse case. Let the courts decide and no it's not their gharilu mamla it's a criminal offence #MohsinAbbasHaider

We, as a society, need to cancel & boycott all these toxic beings. Do not give them any publicity at all in any circumstances. No more proofs needed, no more ‘wait for his side of the story’. Because domestic violence is NOT okay in response of ANY action. #TimesUp 2/2— Asim Azhar (@AsimAzharr) July 21, 2019

#MohsinAbbasHaidar Have never met her but everything Fatima Sohail/Gohar Rasheed said is true. He told me abt it as Fatima's frnds including him were trying to help her as she went to the hospital after being beaten up by Mohsin while she was pregnant with Mohsin's child. (1/3) pic.twitter.com/qkrn8N7tOX— Hamza Ali Abbasi (@iamhamzaabbasi) July 21, 2019

Fatima like so many others,needs help. Am available in Islamabad at any point to meet and take this up. Many legislators feel very strongly about abuse and domestic violence. We worked for years on the lawmaking against it. Please feel free to DM me to coordinate any response https://t.co/RboiOwaxiX— SenatorSherryRehman (@sherryrehman) July 21, 2019

We need counsellors in schools for children going through issues at home (And truth be told we have all been there). Girls and boys in school should be taught about consent, domestic abuse, sexual abuse etc. These should be subjects as basic as math and science.

You know all the fame you get, all the hard work you put into your work, that body you keep working on, those sleepless nights of shooting and working hard don’t pay off when you’re a piece of shit! #TimesUp pic.twitter.com/phRxQpPnYg— Hania Aamir (@realhaniahehe) July 20, 2019

In the face of mounting backlashes, Mohsin Abbas Haider convened a press conference on Sunday, where he rebuffed all allegations leveled against him. He slammed his wife Fatima Sohail for playing the ‘woman card’.

When inquired about his feelings towards Sohail and if the couple could still reconcile, the actor said, “I don’t hold anything against her, she’s a troubled woman and the only way forward is divorce.”

Haider revealed how he wanted to divorce his wife since long but resorted to separation owing to his son. “I would see my son’s face and think; fine, I’ll stay for his sake.”

According to the actor, his wife refused to accept a separation and confessed, “I craved for family life and wanted a second marriage.”

Domestic violence, a common vice in Pakistan, despite its prevalence in every ranks of the society, must be dealt strictly.

Sohail did not agree with her husband’s decision of a second marriage. “I don’t know if it was jealousy or something but she didn’t want me to go through with it under any circumstances.”

The actor claimed that the reason behind Sohail’s propagation is so that no one in the industry would choose to work with him. He revealed how Sohail came to their home at 2 am and refused to leave him alone until he puts a property to her name.

Mohsin termed it as a conspiracy brewed against him by his detractors. He also refused her claims of being with model Nazish Jahangir during their son’s birth.

Haider explained his side; “I was with my producer on a shoot working, not having an affair.” Further stating, “I was never taught to demonize others with false claims, it’s not in my DNA.”

In the end the actor concluded; “She’s not a bad woman; let’s just say I was never her type. I’m not here to attack her in any way whatsoever.”

About a Facebook comment allegedly made by the actor circulating on social media, he clarified that it’s not him since his wife has all the passwords of his social media accounts. Only the investigation ahead can fetch the outcome of the case.

Domestic violence, a common vice in Pakistan, despite its prevalence in every ranks of the society, must be dealt strictly. Let Fatima Sohail and Mohsin Abbas Haider’s case be an instance to deter the potential abusers of women.

MQM and PTI are terrorists: Bilawal