Depiction of literature into real life & transforming the ideas of writers preserving the serenity of their thoughts, are qualities a few actors are blessed with. Moin Akhtar sb was one of those actors and the vacuum created by his demise remains to be filled 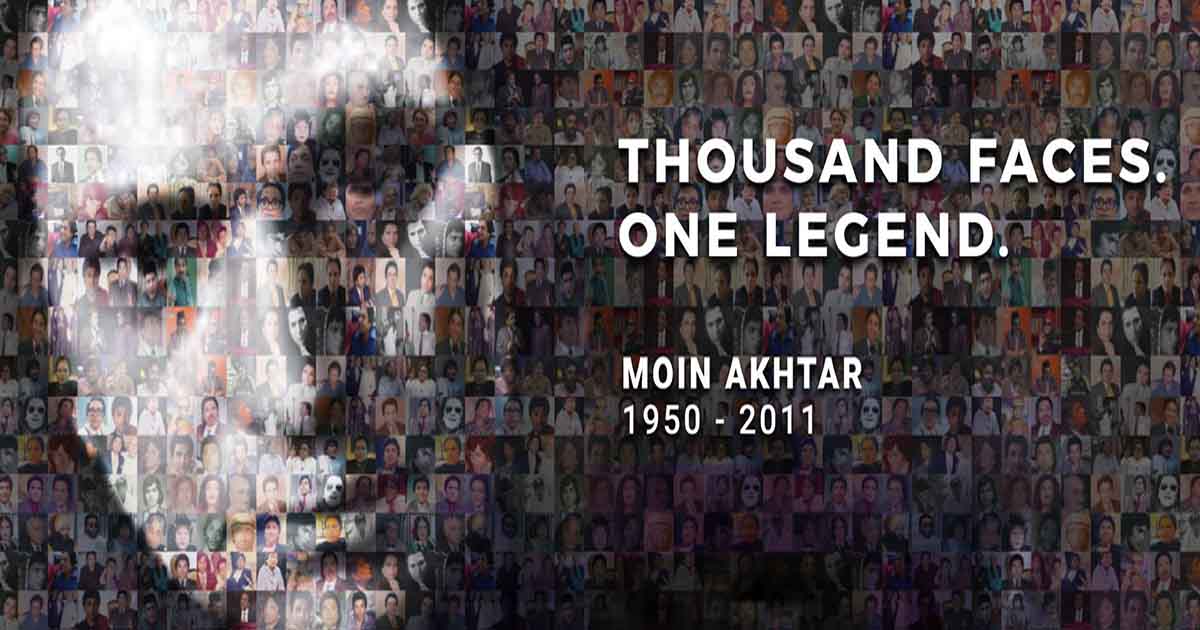 Starting off from modest theatre as Shylock in the Shakespearean Merchant of Venice just at 13 years of age, no one, except witty astrologists, could have envisioned that little introvert boy being amongst the few immortals of the house of artists who would continue to rule the hearts and minds of the people for infinite times.

Moin Akhtar’s glittery-arresting personality was not a persona stand alone; he was an academy of moving arts cataloguing epigrammatically the fathomless diversities of acting, directing, writing, TV hosting, and delivering stand-up comedy in the streams of Television and Radio.

He lived a life of many lives and outstripped into an image larger than life itself and as Stephen King had once said, “it takes a genius to make people laugh” so here we so lavishly had our Genius of Moin Akhtar.

Comedy must observe the collective element of social acceptability while observing the superimposed restraints of social, cultural, and religious dogmas. This further narrows down the space available for the actor in creating an impact making the job squarely challenging

In the world of art and literature, the engaging customers are always on the lookouts of the twin compound elements of rejoice and remorse; tragedy and romance; teaching and entertainment and have their minds and hearts on the tenterhooks for assessing the quality of the products they receive.

The comedy roles are by far more trickily dangerous than others with the fragility of public disdain erupting quickly as the element of laughter demands an immediate creation whereas the road to trauma infusion is consistent on a long track of psychological development and the actor acquires enough time and space in creating the impact in the later scenario.

Furthermore, comedy must observe the collective element of social acceptability while observing the superimposed restraints of social, cultural, and religious dogmas. This further narrows down the space available for the actor in creating an impact making the job squarely challenging.

An actor must transcend in the brain of the writer and go through all that complicated, vexatious and cumbersome thought process which the writer had been through in perceiving or getting struck by that distinct scripted idea.

Next, an actor must think as to deliver the idea so conceived with same frequency, intensity, magnanimity and quality. This means an actor may downplay the writer’s original idea or he may outplay it by his performing stellar.

Moin Akhtar remained faithful to his writers in transforming their ideas and in preserving the serenity of their thoughts thereby nullifying the chances of disappointing the writers. He did not merely play the roles but rather adopted them epitomizing each role he dived in.

Be it the hallmark of Loose Talk, Rosy, Eid Train, Studio Dhai, Studio Poonay Teen, Show Time, Yes Sir No Sir, to name a few; he humanized each verbally sketched character as pure as the driven snow.

The drama is staged in a simple environment, but the intensity of words and the gravity of performance offered by the twin stars render it a matchless classic even unto this time and watching it increases the crave of watching it more and ever again

Who could have known the dazzling Mirza, The Kababia, and his satirical wife Bano, had these two characters not been enshrined of commemorative accounts by the twin giant stars of art world, Moin Akhtar and Khalida Riyasat in the Anwar Maqsood’s comedy of manners, Half Plate.

The grasp over the difficult literary elucidation is surprisingly well covered by the two actors with amazing literary eloquence, emotional fluency, and pristine adoptability.

Without any action comics, the viewers cannot help laughing out the comic depth of the play while simultaneously exposed to the multitude realities of fake social statuses, the worth of hard work, the dependability on social stereotypes and the conflict of interest between literature and commerce of livelihood.

This drama alone can be taken as an unparallel standard proving that it is never the commercial glitter or the environmental glamour which could be the reasons for successful artwork.

The drama is staged in a simple environment, but the intensity of words and the gravity of performance offered by the twin stars render it a matchless classic even unto this time and watching it increases the crave of watching it more and ever again.

The physical silence of characters in pushing or making the audience to laugh yet leaving them without the control over the sense of laughing, glorify the writer’s miracle of writing only so established by the forceful personification by the actors. The same simplicity of material environment and the utmost excellence of artwork can be witnessed in their successful TV shows such as Loose Talk.

The chemistry of Moin Akhtar and Anwar Maqsood was like one dictated by providence in a continuous bond of cause and effect. Watching him and Anwar Maqsood exchanging arrows of wit poisoned with the toxin of harsh social realities, one feels to be so continuously educated in the social realm and so exceedingly elevated in the instructional medium.

The self-realization and its elevation to a normal humanly level is what one takes away after watching their exchanges. The freedom and the extravagance of human observation are the locus of all focus reverberating of their artistic performances.

The bitter satire on the society and the state is amongst the many areas of amusement and awakening.