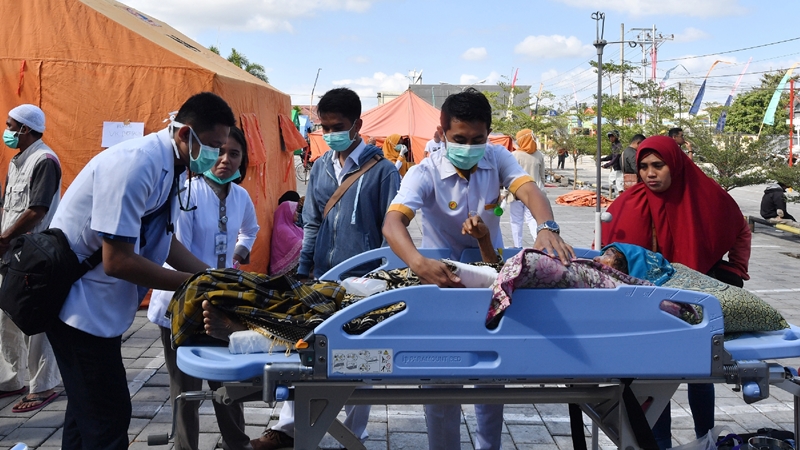 Indonesia Monday sent rescuers fanning out across the holiday island of Lombok and evacuated more than 2,000 tourists after a powerful earthquake killed at least 98 people and damaged thousands of buildings.

The shallow 6.9-magnitude quake sparked terror among tourists and locals alike, coming just a week after another deadly tremor surged through Lombok and killed 17 people. Rescuers on Monday searched for survivors in the rubble of houses, mosques and schools destroyed in the latest disaster on Sunday evening.

National disaster agency spokesman Sutopo Purwo Nugroho said there were fears a number of people were trapped in the ruins of a collapsed mosque in the northern village of Lading-Lading. Footage he posted on Twitter showed the large concrete mosque had pancaked.

Bali’s international airport suffered damage to its terminal but the runway was unaffected and operations had returned to normal. Disaster agency officials said. Lombok airport was also operating.

A lack of heavy equipment and shattered roads were hampering efforts to reach survivors in the mountainous north and east of the island, which had been hardest hit. Najmul Akhyar, the head of North Lombok district, estimated that 80 percent of that region was damaged by the quake.

“We expect the number of fatalities to keep rising,” Nugroho said. “All victims who died are Indonesians.” He said up to 20,000 people may have had to quit their homes on Lombok and paramedics, food and medication were badly needed.

The spokesman said search and rescue teams also rescued between 2,000 and 2,700 tourists from the Gili Islands, three tiny, coral-fringed tropical islands a few kilometres off the northwest coast of Lombok. Authorities initially said 1,200 people were stuck on the islands but scaled up the figure early in the evening. Some tourists chose to stay behind.

Footage posted online by Nugroho showed hundreds crowded onto powder-white beaches desperately awaiting transport off the normally paradise Gilis. “We cannot evacuate all of them all at once because we don’t have enough capacity on the boats,” Muhammad Faozal, the head of the tourism agency in West Nusa Tenggara province, told AFP, adding two navy vessels were on their way.

Indonesia Monday sent rescuers fanning out across the holiday island of Lombok and evacuated more than 2,000 tourists after a powerful earthquake killed at least 98 people and damaged thousands of buildings.

“It’s understandable they want to leave the Gilis, they are panicking.” By early afternoon, hundreds of weary tourists had arrived with their baggage at Bangsal harbour, the main link between Lombok and the Gilis.

Margret Helgadottir, a holidaymaker from Iceland, described people screaming as the roof of her hotel on one of the islands collapsed. “We just froze: thankfully we were outside,” she told AFP tearfully from a harbour in Lombok to where she had been evacuated. “Everything went black, it was terrible.” Seven Indonesian holidaymakers died on the largest of the three islands, Gili Trawangan, while another local woman died on nearby Bali.

But it was Lombok which bore the brunt of Sunday evening’s quake. The shallow tremor sent thousands of residents and tourists scrambling outdoors, where many spent the night as strong aftershocks including one of 5.3-magnitude rattled the island.

The quake knocked out power in many areas and parts of Lombok remained without electricity on Monday. Hundreds of bloodied and bandaged victims were treated outside damaged hospitals in the main city of Mataram and other hard-hit areas.

Patients lay on beds under wards set up in tents, surrounded by drip stands and monitors, as doctors in blue scrubs attended to them. Anguished relatives were huddled around loved ones in front of the main clinic in Mataram, as medical staff struggled to cope with hundreds of patients. Many were yet to be attended to despite spending the night out in the open.

The spokesman said search and rescue teams also rescued between 2,000 and 2,700 tourists from the Gili Islands, three tiny, coral-fringed tropical islands a few kilometres off the northwest coast of Lombok.

“I feel restless sleeping in a tent, I can’t be at peace,” Nurhayati told AFP outside one hospital where she had brought her sick 70-year-old mother. “What we really need now are paramedics, we are short-staffed. We also need medications,” Supriadi, a spokesman for Mataram general hospital, told AFP.

Singapore’s Home Affairs Minister K. Shanmugam, who was in Lombok for a security conference when the earthquake struck, described on Facebook how his hotel room on the 10th floor shook violently. “Walls cracked, it was quite impossible to stand up,” he said.

Bali’s international airport suffered damage to its terminal but the runway was unaffected and operations had returned to normal. Disaster agency officials said. Lombok airport was also operating. Indonesia, one of the world’s most disaster-prone nations, straddles the so-called Pacific “Ring of Fire”, where tectonic plates collide and many of the world’s volcanic eruptions and earthquakes occur.

In 2014, a devastating tsunami triggered by a magnitude 9.3 undersea earthquake off the coast of Sumatra in western Indonesia killed 220,000 people in countries around the Indian Ocean, including 168,000 in Indonesia.