Mother of all meltdowns: Did Serena overstep the mark? 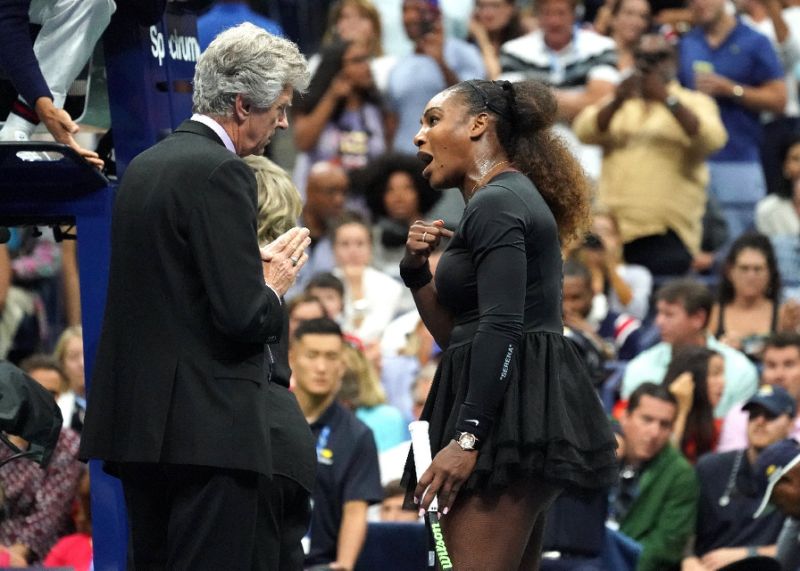 Serena Williams absorbed a $17,000 fine in the wake of her tumultuous US Open final loss to Naomi Osaka on Sunday as debate raged over whether the code violations that sparked her meltdown were sexist. US great Billie Jean King was among those coming down hard on Serena’s side in her claim that chair umpire Carlos Ramos penalized her for comments that a male player could have gotten away with.

“When a woman is emotional, she’s ‘hysterical’ and she’s penalized for it,” King tweeted. “When a man does the same, he’s ‘outspoken’ & and there are no repercussions. Thank you, @serenawilliams, for calling out this double standard. More voices are needed to do the same.’

Ramos’s actions were strictly by the book, but many observers felt he could have used his discretion and not called the coaching violation, something umpires often let go.

National Organization of Women president Toni Van Pelt weighed in with a statement calling for the USTA to sever any ties to Ramos for “a blatantly racist and sexist move”. “Ramos claimed he was just following the rules, but in actuality men stretch the rules all the time and are lionized for being ‘bad boys’ while women are benched.”

Williams’s second-set meltdown overshadowed Naomi Osaka’s 6-2, 6-4 victory, which made the 20-year-old the first Japanese to win a Grand Slam title. Osaka, playing in her first major final against a 23-time Grand Slam champion she idolized as a child, capped an outstanding two weeks in which she also beat 2017 runner-up Madison Keys by simply outplaying her hero.

But her triumph was reduced to almost a side note as Williams railed about her treatment, accusing the US Open of being out to get her. “Always something happens to me here,” she huffed at tournament referee Brian Earley, summoned to the court after she failed to get satisfaction from Ramos.

“Because I’m a woman you’re going to do this to me,” she said. After the match Williams, playing in her third Grand Slam since giving birth to her daughter last September, took a more measured perspective on whether tournament officials had targeted her in an event she has won six times.

US great Billie Jean King was among those coming down hard on Serena’s side in her claim that chair umpire Carlos Ramos penalized her for comments that a male player could have gotten away with.

“Sometimes it might seem like things always happen, but you just kind of have to try to realize that it’s coincidence. Maybe it’s coincidence,” Williams said. But she didn’t walk back her claim that sexism played a role. “I’ve seen other men call other umpires several things,” she said. “I’m here fighting for women’s rights and for women’s equality and for all kinds of stuff.”

Williams was incensed in the first instance when Ramos assessed her a code violation for receiving coaching from her box, although coach Patrick Mouratoglou admitted in an interview with ESPN that he was trying to advise her with a hand gesture and said that all coaches do it.

Yes, I was coaching just like everybody else. We have to stop this hypocrisy. Furthermore, Serena didn’t even see my gestures. She felt humiliated by the warning,” said the Frenchman.

This Should Not Happen

Williams took the charge as an attack on her character. “I don’t cheat to win,” she told Ramos. “I’d rather lose.” King took the opportunity to espouse her long-held view that coaching should be allowed “on every point”.

“It isn’t, and as a result, a player was penalized for the actions of her coach,” King tweeted. “This should not happen.” In a cascade of events, Williams has issued a code violation for racquet abuse after giving back a service break in the second set. The one-point penalty, further inflamed the star who branded Ramos “a thief”.

Read more: My worst time? This is not even close, says beaten Sharapova

“You will never, ever be on another court of mine, you are the liar,” she fumed and he handed her a game penalty for a third violation for verbal abuse that cost her a game. Ramos’s actions were strictly by the book, but many observers felt he could have used his discretion and not called the coaching violation, something umpires often let go.

“I will admit I have said worse and not gotten penalized,” James Blake, the former top-ranked US male tennis player, said on Twitter. “And I’ve also been given a ‘soft warning’ by the ump where they tell you knock it off or I will have to give you a violation. He should have at least given her that courtesy.”