Musharraf to lose his right to defend if fails to appear on May 2: SC 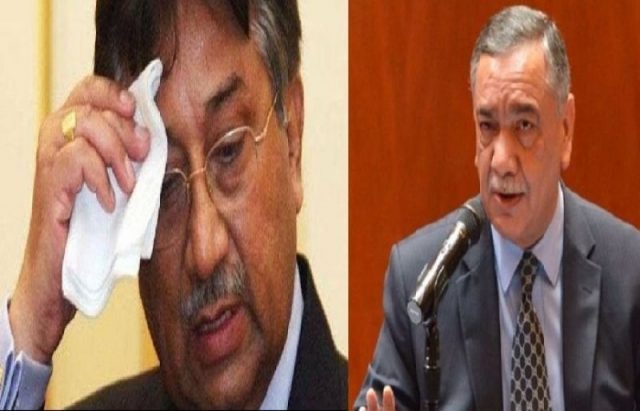 The Supreme Court of Pakistan said on Monday that if former president General (retd) Pervez Musharraf case doesn’t appear in court on May 2, he will lose his right to defend himself.

During the hearing of the high treason case against him, Chief Justice Asif Saeed Khosa said if a suspect is purposely not appearing in court, they cannot let him take advantage.  In the previous hearing of the petition, the top court had said that it would intervene if the special court, in its next hearing, failed to make a decision on how to record the former president’s statement.

The special court on Mar 28 had ordered Musharraf to appear before it on May 2. Defence lawyer Safdar had said that the former president wished to appear in court on May 13

A March 28 order from the special court hearing was presented in the top court today. Chief Justice Asif Saeed Khosa asked whether the former president had given assurances that he would appear in court. “Despite the assurances, if Musharraf doesn’t come back, what would happen then?” the top judge asked his counsel, adding that something should be done if he did not return.

Musharraf’s lawyer Salman Safdar, avoided to give a personal guarantee and said that the former president himself wanted to come back and record a statement. He added that May 13 had been given as the date of Musharraf’s return from abroad.

Justice Khosa said that a trial becomes unconstitutional in the absence of a suspect but if a suspect doesn’t appear on purpose, he cannot be allowed to take advantage of the situation. “High treason is not an average crime,” Justice Khosa reminded the defense counsel.

A special court had indicted Musharraf for high treason in March 2014. Musharraf left for Dubai in 2016 to “seek medical treatment” and hasn’t returned since. Last month, he was admitted to a hospital in Dubai after suffering a reaction from a rare disease for which he is already under treatment.

Tomorrow will be the D-Day in Operation Panama