Prime Minister Imran Khan stressed upon the hazards of Islamophobia for the Muslim world and urged the OIC and its member states to announce their unwavering support for the justified freedom causes of Palestine and Kashmir and delinking them with terrorism. 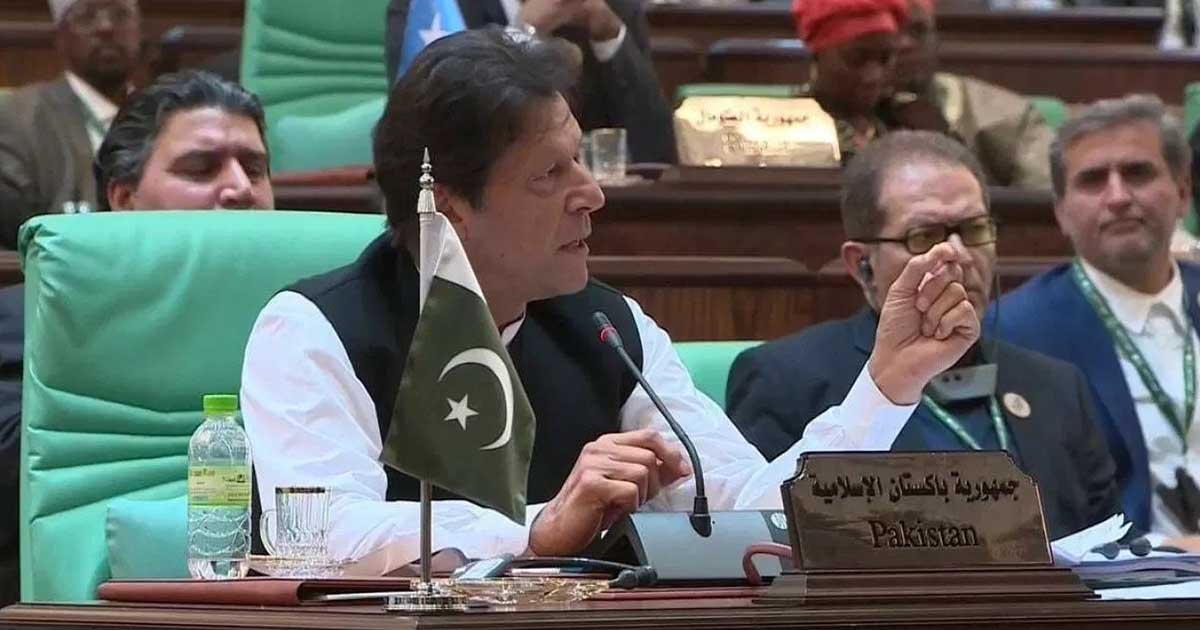 Prime Minister Imran Khan addressed the 14th OIC Summit in Makkah on Saturday, emphasizing the need to eliminate the labels of terrorism from the peaceful religion on Islam. The main thrust of his speech was that the Muslim leadership, namely OIC, should engage more robustly with the world for better understanding on issues that divide the world of Islam from the rest.

The Pakistani premier started his maiden speech at the summit by raising the issue of Islamophobia: “When someone from the West blasphemes our Holy Prophet (PBUH), I always felt the response from the Muslim Ummah and OIC was lacking.”

“The OIC, us heads of states, owe a responsibility to the Muslim world, that when somebody blasphemes our Prophet (PBUH), it is a failure of the OIC that we have not been able to explain to other countries the love and affection we feel for our Holy Prophet,” said Prime Minister Imran.

Struggle for Freedom is not Terrorism

He went on to say Islamophobia and terrorism caused damage to Muslims like none other. PM Khan stated, “The West is still portraying a distorted picture of Islam. No religion allows human killings and terrorism. Islam has no connection with terrorism.”

Prime Minister Khan reminded the OIC that it was a body established to resolve the Palestinian issue, and as the OIC marks its 50th year, the issue is still as conflicted as ever.

PM Khan said, “The Western World has equated radical Islam with terrorism and this has done tremendous amount of disservice to the Muslim world. It has led to Islamophobia; the words radical Islam have been used to define terrorism.”

I want to use this forum to talk to the OIC about explaining to the West that their idea of freedom of expression can not hurt the sentiments of Muslims across the globe. Just the way the Jewish community has made no space for error when it comes to the Holocaust #OICMakkahSummit pic.twitter.com/yUajUnx6WJ— PTI (@PTIofficial) June 1, 2019

Speaking to the summit, the prime minister called on the OIC to stand up against the oppression of Palestinians, Kashmiris and Muslims in the world.

PM Khan said, “At a time when Islamophobia is at an all-time high, and Muslims are persecuted in Kashmir, Gaza, Syria, the OIC has a very critical role to play.”

Prime Minister Imran Khan with the King of Bahrain at #OICMakkahSummit
At a time when Islamophobia is at an all time high, Muslims are persecuted in Kashmir, Gaza, Syria, the OIC has a very critical role to play. pic.twitter.com/YAERd1XUo8

He stressed that equating Muslims’ political struggle with terrorism was not correct in any way. The freedom struggle of Kashmiris and Palestinians cannot be linked to terrorism.

The Premier urged, “The people of Kashmir must also have their right to self-determination; us as a body must stand against the oppression happening with the Muslim world”.

He further stated the wave of oppression against Muslims in Occupied Kashmir is on rise, and stressed that Kashmiris are struggling for their freedom. He stressed, “The OIC owes this responsibility that it should get Kashmir issue resolved as per UN resolutions.”

Underlining Israel’s use of terrorism against innocent Palestinians, Pakistani premier reiterated that Baitul Muqaddas is the capital of Palestinians and Golan should remain part of Palestine.

Prime Minister Khan reminded the OIC that it was a body established to resolve the Palestinian issue, and as the OIC marks its 50th year, the issue is still as conflicted as ever. PM Khan stressed, “.There must be a two state solution and the annexation of Golan Heights ended.”

PM stressed that Muslim countries are seriously lacking in scientific education and should prefer modern technology and education and they should spend money on modern modes of education.

Imran Khan said, “We must pay more attention to quality education and universities; an area in which the Muslim world lags. I fear the Muslim world may be left behind again and this is the best forum to raise this concern in.”

He underscored western world should care for the sentiments of Muslims, and stressed that the world will have to come out of orbit of Islamophobia. PM Khan urged that Leadership of the Muslim world should convince western world that they cannot hurt Muslims’ sentiments by blaspheming our Prophet and our holy book. He stated that New Zealand incident proved that terrorists have no religion.

He reminded the members how Israel successfully convinced the world that Holocaust was a sensitive issue and world be careful in mentioning it. PM Khan emphasized that Muslims need to make it clear that blasphemy cannot be justified by calling it ‘Freedom of Speech’.

PM Khan said, “If any Muslim is involved in terrorism the incident is named Islamic terrorism. Most of the terror attacks were launched by Tamil Tigers before 9/11. No one linked their attacks to Hindu religion. No one blamed any religion for Japanese Kamikaze bombers.  Politics and power struggles are the reasons behind terrorism”.

The Pakistani premier stressed that the Muslim world must undertake effective measures to delink terrorism from Islam.

Prime Minister Imran Khan, on Friday, held a bilateral meeting with Afghan President Ashraf Ghani on the sidelines of the 14th OIC summit held in Makah.

During this bilateral meeting, the two heads of states discussed the bilateral relations between Pakistan and Afghanistan, alongside discussing the Afghan peace and reconciliation process.

PM Khan and Saudi Crown Prince agreed to speed up the implementation of the decisions and negotiations conducted during the Prince’s visit to Pakistan in February this year.

Prime Minister Imran Khan assured President Ashraf Ghani that Pakistan is fully committed to assist peace and stability in Afghanistan. He assured Pakistan’s firm support for an Afghan-owned and Afghan-led peace process to reach a unanimous political solution to the ongoing problems of Afghanistan.

President Ashraf Ghani is all set to mark his first visit to Pakistan, which will provide the two countries an opportunity to enhance their cooperation on matters pertaining to regional politics, security issues, economic alliances and more.

Prime Minister Imran Khan thanked the Crown Prince and Saudi government for providing Pakistan oil facilities on deferred payments. The two dignitaries agreed to engage in regular dialogue over all the issues and projects of mutual interest.

China says it will support Pakistan over Kashmir