The accountability watchdog took Hamza into custody from the premises of LHC after the provincial opposition leader through his counsel requested the court to allow him to withdraw his bail applications. LHC’s division bench accepted the plea and ‘dismissed the applications as withdrawn’. Before being arrested, Hamza said he will quit politics if it is proven that he was involved in corrupt practices. 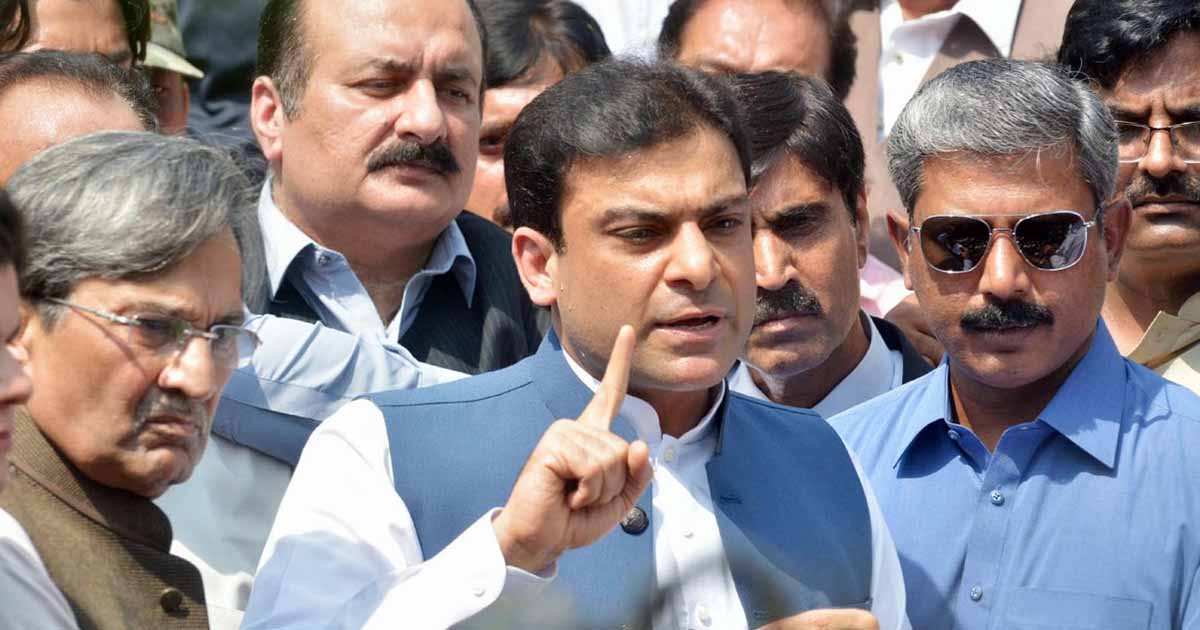 The National Accountability Bureau (NAB) arrested on Tuesday the Leader of the Opposition in the Punjab Assembly Hamza Shahbaz after the Lahore High Court (LHC) dismissed his interim bail applications in two corruption references.

The accountability watchdog took Hamza into custody from the premises of LHC after the provincial opposition leader through his counsel requested the court to allow him to withdraw his bail applications. LHC’s division bench accepted the plea and ‘dismissed the applications as withdrawn’.

On April 27, NAB had sent a questionnaire to Hamza in accumulation of assets beyond known sources of income and alleged money laundering cases.

Hamza, who is facing inquiries in cases related to Punjab Saaf Pani Company, Ramzan Sugar Mills, money laundering and assets beyond means, appeared before the court on Tuesday. Following the hearing, the NAB officials detained him.

Before being arrested, Hamza while speaking to the media said that not even a “one rupee” corruption could be proven against him. “I will quit politics if it is proven that I was involved in corrupt practices,” he said.

Hamza, the son of Pakistan Muslim League-Nawaz (PML-N) president Shahbaz Sharif, has been arrested a day after the former president and Pakistan Peoples Party (PPP) co-chairman Asif Ali Zardari was arrested by NAB in Islamabad.
Read more: Does NAB have conclusive evidence against Hamza Shahbaz?

Meanwhile, a large number of PML-N workers blocked Lahore’s Mall road and protested against the move. A scuffle between police and party supporters also broke out outside the court.

On April 27, NAB had sent a questionnaire to Hamza in accumulation of assets beyond known sources of income and alleged money laundering cases. The bureau had directed the provincial lawmaker to provide details in respect of investment made from 2005 until now.

In the questionnaire, NAB had stated that Hamza earlier provided an incomplete record to the investigation team and his replies were not satisfactory. NAB has asked Hamza to provide details of the loans against the companies and partnership with Suleman Shahbaz and Nusrat Shahbaz.

LHC had barred NAB from arresting him. On February 14, Shahbaz was also granted bail by the LHC in the Ashiana Iqbal Housing scheme and Ramzan Sugar Mills cases.

The Online wire service had stated that Hamza was directed to file tax returns and wealth statement from 2006 to 2008. Apparently, the news service had said, Hamza did not file tax returns in the income tax department for the said years. Specifically, NAB said, detailed replies in respect of the increase in his assets in three years should be submitted.

The questionnaire alleges that Sharif family’s assets stood at Rs53,600,000 in 1999 and the assets rose to Rs683,300,000 within 10 years, the wire service had stated, adding that NAB directed Hamza to clarify his position how he made Rs3 billion.

Hamza should also give replies to the information received from Fazal Dad Abbasi, NAB had said, adding replies to the money allegedly received from Qasim Qayyum and Mushtaq Cheeni should also be provided. The anti-graft watchdog had also directed him to file details of the gifts and salaries received by him.
Read more: NAB seeks more answers from Hamza Shahbaz

On April 9, a court in Lahore had indicted the Leader of the Opposition in the National Assembly Shahbaz Sharif and his son Hamza in the Ramzan Sugar Mills case. Both the suspects had pleaded not guilty and maintained that they had not only saved Rs2,300 billion but the money was never misused.

Earlier, the LHC had granted and extended Hamza’s interim bail in an ongoing investigation into assets beyond known sources of income. LHC had barred NAB from arresting him. On February 14, Shahbaz was also granted bail by the LHC in the Ashiana Iqbal Housing scheme and Ramzan Sugar Mills cases.

Previously, a NAB team has tried to arrest Hamza twice on grounds that he was not cooperating in the ongoing investigation but couldn’t succeed because of resistance by guards and the party workers.
Read more: Highway to prison? Hamza and Shahbaz indicted in Ramzan mills case

Subsequently, a case was registered against Hamza’s guards on an application filed by the NAB saying that Hamza’s guards had manhandled members of the NAB team, tore their clothes, and threatened their lives when they raided his residence to arrest him.