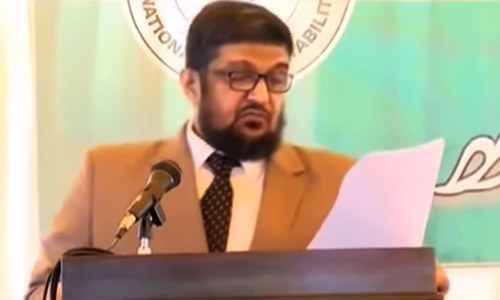 The National Accountability Bureau (NAB) on Monday in a raid on two Islamabad offices of the National Testing Service (NTS) arrested CEO Air Commodore (r) Dr. Sherzada Khan and four other employees. The latest development has increased the controversy surrounding the testing service.

NAB officers also seized records. Later, Dr. Sherzada Khan was released. After his release, Dr. Sherzada claimed that the raid had not been conducted by NAB. “The Federal Board of Revenue (FBR), its Directorate of Intelligence and Investigation (Inland Revenue) had proceeded to seize records of the company related to tax matters only,” he claimed.

Read more: Our real intellectual crisis is not that…

The decision was made after the anti-corruption watchdog received a number of complaints from candidates ranging from papers being compromised before the tests, procedural irregularities in the hiring process, and other corrupt practices in the NTS. Requesting anonymity, an NTS official said that during the raid, the NAB officials also closed down the main server installed in the office to run the Information Technology (IT) section.

The NTS is responsible for conducting tests that identify candidates for government jobs including sensitive areas such as the Ministry of defense.

“Two directors managed to leave the office when the NAB officials were in the building. NAB came into action over reports that the question papers of exams conducted by NTS for MBBS and BDS admissions in the public sector medical colleges and universities of the Sindh had been leaked. NAB Chairman Justice (r) Javed Iqbal had ordered an inquiry into the matter,” he said.

Sindh Chief Minister Murad Ali Shah had also formed a five-member inquiry committee to investigate allegations of irregularities in the entry test for medical colleges and universities conducted on October 22 through the NTS following widespread protests by candidates in the province.

National Testing Service (NTS) is an organization in Pakistan that administers academic performance evaluation tests. It is similar to Educational Testing Service (ETS) in the United States. However, NAB has also become an administrator of entrance exams into universities and government service. Yet controversy has grown over the passage of time.

Controversy first arose in 2007 after the mandating of NTS testing, first announced by Khalid Maqbool, Governor of Punjab, with regards to admission to universities and later set aside by the government unless the laws regarding university admission were amended. There was also the lack of transparency in the overall process due to the undisclosed nature of alternative processes for any participants.

A recent report by the auditor general of Pakistan revealed that NTS officials and related departments were not in the favour of a verification process. Recently, Finance Minister Ishaq Dar had told Senate that four of the five testing services in the country – the NTS, the Balochistan Testing Service, the Pakistan Testing Service and the Sindh Testing Service – had not paid taxes for the last three years, while the Universal Testing Services had paid Rs 873 only in the year 2015.

The lack of transparency and allegations of corruption on the NTS raise many questions. The NTS is responsible for conducting tests that identify candidates for government jobs including sensitive areas such as the Ministry of defense. Corruption and lack of transparency can expose these sensitive departments to various threats.

Coronavirus vaccines available to all as Pakistan joins UN campaign

In a first, opposition party stages ‘e-rebellion’ against Iran