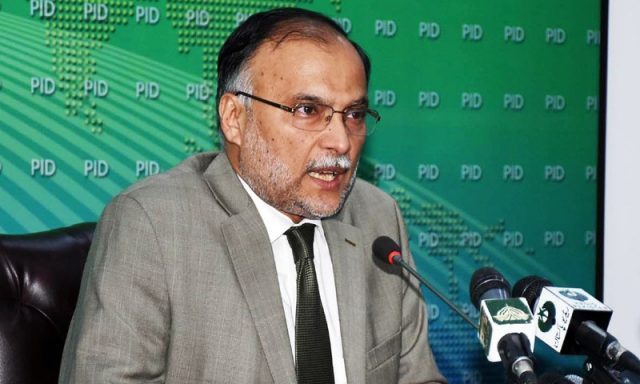 Talking to newsmen outside the accountability court, the elder Sharif alluded to the money, some $9 (Rs 1000), distributed among the left out demonstrators who participated in the Faizabad sit-in, and portrayed the assassination bid on Iqbal, an outcome of it. Nawaz Sharif, who has been accused in corruption references by the National Accountability Bureau, claimed that if the protesters had not been given Rs 1,000 each, perhaps this day would not have come.

This is not the first time Sharif has been casting aspirations regarding the role played by law enforcing institutions regarding the Faizabad sit-in. Many of the political commentators also echo the remarks made by the former lawmaker that the Faizabad sit-in gave more space to the religiously motivated crowd, thereby challenging the writ of the government. However, in his fresh tirade, Nawaz Sharif forgot to mention the role played by the Punjab government, administered by his younger brother, Shehbaz Sharif, in the Faizabad sit-in.

Safdar had lavished praise on the demonstrators during the sit-in and had tried to garner religious sympathies by proposing an outlandish mechanism for induction into the armed forces.

Before starting the march towards Islamabad on November 6th 2017, the religious groups had staged protests in Lahore. According to media reports, the Punjab government also negotiated with Tehreek-e-Labbaik leaders and fulfilled most of their demands. However, what became an apparent reason for the Faizabad sit-in was the impasse of Punjab government with the demonstrators over the issue of Law Minister, Zahid Hamid’s resignation.

The well-placed sources in the Punjab government reveal that when the demonstrators asked for the resignation of Zahid Hamid, the government expressed its helplessness and urged the protesters to demand the same from the federal government. What gives credence to Punjab govt’s hidden role behind instigating the Faizabad protesters is the speech of Chief Minister Punjab, Shehbaz Sharif, who had requested his brother to expel the individual behind the controversial amendment regarding the finality of Prophet-hood in the Election Act 2017.

Another visible negligence of Punjab govt, in failing to thwart the Faizabad sit-in, is the role played by the provincial Law Minister, Rana Sanaullah. Sanaullah has been an active member of ruling PML-N and has also obstructed multiple protests in past, however, in case of the Faizabad sit-in, he did not direct the local administration along the G.T road belt to either restrict the movement of the Faizabad protesters or personally convince them to move back.

The shady role played by Rana Sanaullah might have emerged from the trouble caused by one of his statements that riled the religious circles. The controversial statement also irked Pir Sialvi, spiritual mentor based in Sial Sharif, Sargodha city of Punjab, who demanded the resignation of either Shehbaz Sharif or Rana Sanaullah in December 2017.Pir Sialvi, also bagged the support of a few lawmakers over the issue, however, after a meeting with the Chief Minister Punjab, the issue was resolved.

Even when Rana Sanaullah was asked to resign by Pir Sialvi, he expressed that the resignation will be tendered only on the directives of the Supreme Leader of PML-N, Nawaz Sharif. With this in Mind, it becomes visible that Nawaz Sharif, in his bid to discredit the state institutions, also forgot that the controversy that resulted in thousands of demonstrators to assemble in Islamabad, stemmed out of the clause enshrined in Election Act, devised by a federal minister.

With Nawaz Sharif’s undue criticism against one of the officials of Rangers for distributing money, the concealment of Raja Zafarul Haq report on the issue also becomes questionable. The former lawmaker missed the core point in the distribution of viaticum by the Rangers official after the conclusion of Faizabad sit-in; the money was distributed in line with the jail manual followed by the police.

Read more: Nawaz Sharif may create the perception of winning public front, but…

Moreover, the Rangers official, who was filmed distributing the money, had clarified that it was his personal move and not of the institution. Attaching the distribution of token money with the tragic attack on Ahsan Iqbal, seems unfounded and baseless. The only reason why PML-N is playing up the issue is to fend off the allegations hurled towards it regarding the Election Act 2017. Moreover, Nawaz Sharif also avoided mentioning the role played by his son-in-law Captain (r) Safdar during and after the sit-ins.

Safdar had lavished praise on the demonstrators during the sit-in and had tried to garner religious sympathies by proposing an outlandish mechanism for induction into the armed forces. Instead of accepting the fall out of the Election Act, the elder Sharif seems to be using the botched bid to his advantage, with the upcoming elections around the corner.

The battle for the Iranian nuclear deal: China approaches a watershed