Reviewing Asghar Khan case is damaging for Nawaz Sharif only 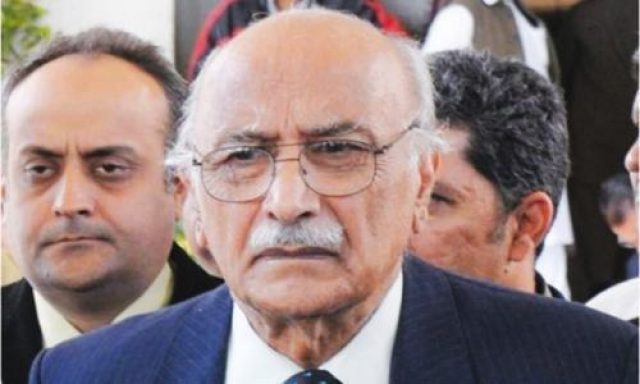 The Supreme Court of Pakistan has announced to resume hearing on a slew of review petitions filed against the verdict of infamous Asghar Khan Case in 2012. A three-member bench headed by the chief justice of Pakistan, Mian Saqib Nisar will hear the case on Monday.

The top court, in its landmark ruling, had also instructed Federal Investigation Agency to launch a probe against the two former generals for their shady role in 1990 elections, though both denied the charge and had filed appeals against the apex court’s decision.

To save his skin and fend off the allegations, Nawaz Sharif is merely relying upon the ‘hidden forces’ factor behind his ouster and Asghar Khan case’ reopening will stripe him off quoting the forces in political rallies.

The decision by a three-member bench headed by then Chief Justice, Iftikhar Muhammad Chaudhry and comprising Justice Jawwad S Khawaja and Justice Khilji Arif Hussain, came on a petition filed by Asghar Khan, former Air Chief, in 1996. After the verdict, the federal government had also filed a review petition in 2012.

In its petition, the PPP government challenged the observations made by the court against the office of the president; Asif Ali Zardari was president at the time. However, the review petition was withdrawn in 2015.

Looking at the players at the centre of Asghar Khan case controversy, apparently, it seems that the repute of military establishment might dent a bit further in days to come. However, delving into the details, Nawaz Sharif, the former Prime Minister of Pakistan, seems to be in trouble for one more time.

The Asghar Khan case related to allegations against the ISI of distributing money among influential politicians ahead of the 1990 general elections. Asghar Khan had alleged that the top spy agency doled out Rs140 million to create the Islami Jamhoori Ittehad (IJI) against PPP and thwart it from winning the polls. The PPP was led by Benazir Bhutto at that time.

The role of Nawaz Sharif becomes questionable as the said IJI comprised of nine parties, with a  major share of Pakistan Muslim League headed by Sharif; Nawaz Sharif became the Prime Minister of the country after the ‘rigged’ elections. According to the affidavit submitted by Gen Durrani, those who had received funds from the ISI included political bigwigs.

The top court, in its landmark ruling, had also instructed Federal Investigation Agency to launch a probe against the two former generals for their shady role in 1990 elections, though both denied the charge and had filed appeals against the apex court’s decision.

However, the only notable figure, who is relevant to this day, is Nawaz Sharif, who, according to the affidavit, received Rs 3.5 million. The political narrative adopted by former Premier Nawaz Sharif after his disqualification in the Panama Papers Case alleges the establishment of transgressing in the the political affairs.

Read more: Nawaz Sharif may create the perception of winning public front, but…

Though Nawaz Sharif has no smoking gun to bolster his claims, even then, he has been trying to defend his murky wheeling and dealing under the garb of institutional transgression. Nawaz’s daughter, Maryam Nawaz also decries the role played by certain institutions, though both of them fall short of revealing their names.

The timing of the review petition is crucial as the Supreme Leader of PML-N, Nawaz Sharif has coined the term of ‘aliens’ in the political arena and has boasted to fight against the ‘imaginary’ player. Not only Sharif is reiterating the dubious role of ‘aliens’, his hand-picked Prime Minister, Shahid Khaqan Abbasi, has also started peddling the same agenda, although the Election Commission of Pakistan has upbraided him from uttering ‘unconstitutional’ remarks.

Besides many others, the Asghar Khan case revolved around plaintiff Asghar Khan, former President Ghulam Ishaq Khan, former Premier Benazir Bhutto, former Interior Minister Major General (retd) Naseerullah Babar and a key witness Abdul Hafeez Pirzada, but they all have breathed their last. The only distinguishable politician alive to this day is Nawaz Sharif who received funds from the premier agency, according to the affidavit.

Equating the amount in terms of Gold prices, the Rs 3.5 million of the 1990s, translates to Rs 60 million in the current era. The remarks and rulings which will come out of the courtroom in days to come will inflict a devastating blow on Sharifs as the perception of Nawaz Sharif, having colluded with the same ‘aliens’ in past, will become more visible.

The review petition is being heard at a time when the elder Sharif is facing trial in the accountability court and the next general elections are around the corner. To save his skin and fend off the allegations, Nawaz Sharif is merely relying upon the ‘hidden forces’ factor behind his ouster and Asghar Khan case’ reopening will stripe him off quoting the forces in political rallies.

Efforts will continue to maintain normalcy in Karachi and the province: COAS