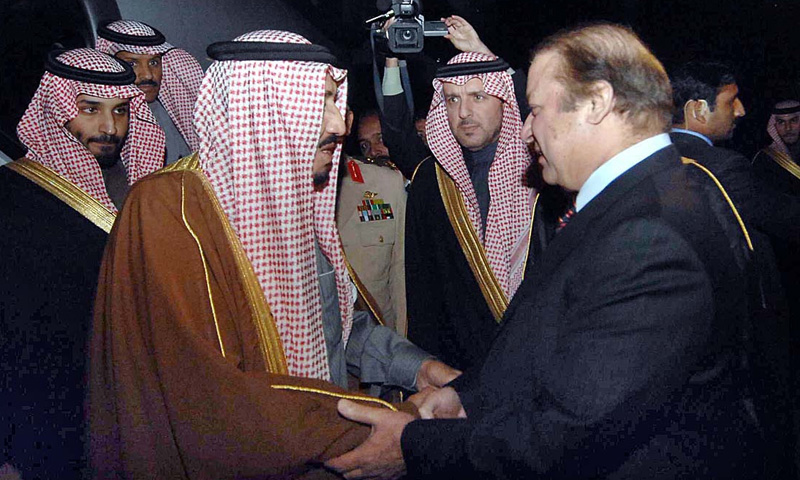 Dec 31, 2017 – Ex-Pakistani premier, Nawaz Sharif ‘s Spokesperson has finally spoken; he has categorically denied that any NRO or deal is being done by Sharif family in Saudi Arabia. He was responding to widespread speculations, by the opposition parties and media, regarding the sudden visit of the Sharif brothers to the kingdom of Saudi Arabia.

Many PMLN leaders, like Senator Pervaiz Rashid, ex-inforamtion minister, have appeared on media and asserted that Nawaz Sharif has been invited by Saudi royal family to discuss the political situation in Pakistan and the region. However political analysts, on media, point out that Nawaz Sharif was disqualified as Prime Minister by the Supreme Court of Pakistan and is facing corruption cases in a trial court in Islamabad and given these circumstances, it is difficult to believe that Saudi government can engage him for political discussions on Pakistan.

Saudi Arabia in times of trouble and political uncertainty so although he has been legally disqualified from performing any political duties and is legally barred from conducting international relations on any level.

Nawaz Sharif’s sudden trip to Saudi Arabia has aroused widespread suspicions amongst the opposition political parties. PTI, PPP and other parties have condemned his visit as an attempt seeking another NRO to bail out Sharif family from the corruption cases that have followed the Supreme Court decision of July 28, that disqualified Nawaz Sharif as prime minister. Imran Khan, PTI chairman, in one of his tweets even described Nawaz Sharif becoming a national security threat.

Speculations in Pakistan’s political circles have a background. In Dec 2000, Nawaz Sharif, along with his family, was allowed to exile to Saudi Arabia after his conviction, in “Plane Hijacking Case” was upheld by Sindh High Court. Cases of corruption, including the Hudaibya Paper Mills, were suspended as a result of the political deal between Gen. Musharraf and Saudi Royal Family. Later US President, Bill Clinton accepted, in his book, that he had played a role in bailing out Sharifs thorough the Saudis. Sharifs were allowed to leave prison, and corruption cases against them were suspended, on the guarantees given by Saudis, in a written agreement, that they will stay away from Pakistani politics for ten years. However Sharifs were able to come back, after only seven years, in 2007, when Benazir Bhutto struck NRO deal with Musharraf – courtesy the US intervention.

The nature of this personal relationship that exists between Nawaz Sharif and the royal family of Saudi Arabia has thus aroused deep suspicions and raised many eyebrows in the past and instant political speculations, in the wake of recent visit, could be understood. However latest news emerging from Saudi Arabia point to something else.

Speculations that have been flying high regarding this specific visit has been preoccupying all the media channels and politicians from opposition parties since the past 72 hours.

Pakistani TV channels are now pointing out that sudden visit of Sharif brothers to Saudi Arabia has something to do with the ongoing corruption investigations against the detained princes. According to TV channels (Channel: 92 & ARY News), sons of King Abdullah, have revealed to their investigators that large investments, they made in Europe, up to 3 billion Riyals, (approx. US $1 billion) actually belonged to Sharif brothers. And thus Saudi princes were merely the front men for these investments.

During the investigation, Prince Meshaal Bin Abdullah, one of the sons of King Abdullah, implicated the Sharif Brothers and claimed that he carried out the investment on their behalf causing the Sharif’s to be summoned by Saudi Arabia for further investigation. Other sources point to certain investments made by Prince Walid bin Talal. According to Pakistani media sources, Sharif brothers are pleading to the Saudi authorities that they are willing to reimburse the Saudi state, if they are not formally made part of the ongoing investigations.

The central leadership of PML-N released public statements on Monday, Jan 1, 2018, completely discrediting earlier presumptions that revolved around the possibility of an NRO. Media analysts however point out that these public statements were made with immediate effect as soon as this new information – concerning investigations in Saudi Arabia – was brought to light even though the allegations have been making the headlines for the past three days- raising suspicions that this is another spin to suppress the real facts regarding the investigations.

Saudi Arabia made by the Sharif brothers invalidating earlier presumptions that alleged that Nawaz Sharif was trying to attain another NRO.

Speculations that have been flying high regarding this specific visit have been preoccupying all the media channels and politicians from opposition parties for the past 72 hours. It remains to be seen if Sharif family will clarify the nature of their talks, and apparent investigations, in Saudi Arabia. If investments were made under the name of certain Saudi princes then it implies that Sharif family had other funds, across Middle East and Europe, never disclosed to tax and elections authorities in Pakistan. This may be the beginning of a new political scandal in Pakistan.