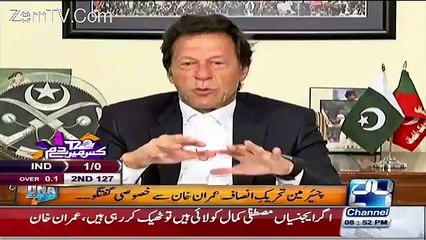 After his disqualification, Nawaz Sharif has, on multiple occasions, dismissed the Supreme Court verdict which ordered his removal. Nawaz has raised several questions casting doubt on the Court’s verdict. He claims that his dismissal was part of an international conspiracy against his family.

Here at GVS we have undertaken a close examination of Nawaz Sharif’s questions and have endeavored to provide befitting answers.

Question 1: Has there been any instance where an investigation was ordered through a WhatsApp call?

In order for an impartial investigation to take place, the Supreme Court formed the JIT and protected it from external interference and pressure.

Answer: No, but it is a well-known fact that the Intelligence Bureau (IB) is constantly monitoring cell phones of all those who the Sharif family deem a threat and that includes the judiciary. During Nawaz Sharif’s tenure, IB has been reduced to little more than personal servants of the Sharif family. The use of WhatsApp was deemed necessary because it provided a secure means of communication for the Court to coordinate its fact finding efforts. Does the law prohibit the use of WhatsApp? Absolutely not.

Question 2: Has the Supreme Court ever made a JIT in a similar case?

Answer: First of all it is important to note that there has never been a transparent and impartial investigation of the Sharif clan. The formation of the JIT was a first because the judiciary desired that this case set the precedent for transparency for all future inquiries of similar nature. Analysts and people in the know have revealed that Nawaz Sharif purposefully employs compromised individuals to important posts in government agencies so as to keep them loyal and squash any inquiries that may prove unfavorable for the Sharifs. Case in point, SECP chairman Zafar Hijazi and NAB chief Qamar Zaman Chaudhary.

In order for an impartial investigation to take place, the Supreme Court formed the JIT and protected it from external interference and pressure.

Question 3: Has support ever been sought from intelligence agencies apart from issues of terrorism and national security?

If during the course of a robbery investigation a kidnapping is also proved against the accused, would he be not punished for both of the crimes

Answer: Well, yes. Nawaz Sharif unabashedly used the IB to spy upon PTI leaders during the 2014 Dharna. It is common knowledge amongst those in media and the political opposition that whosoever criticizes the Sharif’s is swiftly put under surveillance. GVS has also been subjected to similar harassment.

Question 4: Has the Supreme Court ever monitored any investigation proceedings like in Panamagate case?

Answer: As a matter of fact, yes. Yousaf Raza Gillani was dismissed through a similar process. Furthermore, the Court has the power to oversee the execution of its orders.

Question 5: Was Capital FZE and the salary I received from it mentioned in any of the three petitions filed against me?

Answer: No, but if during the course of a robbery investigation a kidnapping is also proved against the accused, would he be not punished for both of the crimes? It was proven beyond doubt that Nawaz did not fully declare assets in his possession. Can the Court not punish him on that?

Question 6: Can a judge who gave a dissented against the need for JIT preside over its proceedings? Is that not unfair?

Answer: Not at all, there is no law against such an arrangement. Also, the verdict was given after careful consideration and in line with the evidence available. If Nawaz has any viable evidence in his defense, why doesn’t he submit it to NAB?

Question 7: How could the two judges who were not part of the three member implementation bench pass a verdict when they were unaware of the JIT’s findings?

Answer: The two judges in question had already adjudicated that Nawaz should be disqualified, it was the other three who had asked for further inquiries. Did Nawaz expect the two judges to actually change their decision after the JIT report?

The specter of civil-military tensions is stirring, yet again…?

Who is behind Nawaz Sharif’s Disqualification?

Pakistan suffers: The corrupts are made heroes