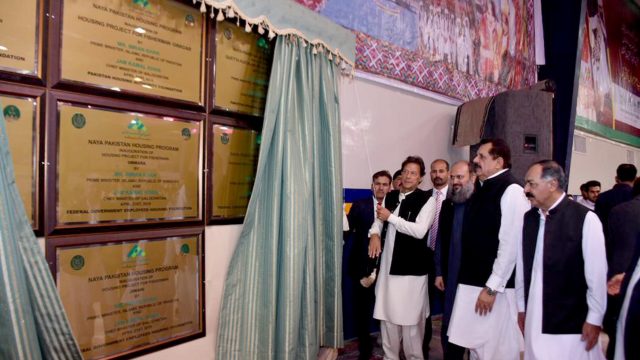 Amid the ongoing economic crisis, Prime Minister Imran Khan on Sunday visited Quetta to inaugurate Naya Pakistan Housing Project. The said project is one of the core promises made by Pakistan Tehreek-e-Insaf (PTI)’s chief after assuming the office.

The premier addressed a gathering in Quetta where he said that his government was committed to modernizing the long-neglected province of Balochistan to bring it at par with the rest of the country.

The focus on PM Khan on Balochistan and directions being passed on to the CM give a clear message that the PTI-led government is interested to work on uplifting the lives of people living in marginalized areas of Pakistan.

‘Corruption Must be Eliminated’

“The country will develop when the weak segments of the society are cared for by the state,” PM Imran said, adding that no nation can progress “unless the evil of corruption is eliminated”.

Plan to Extend Loan Facility to the Low-Income People

The prime minister further said that under the mega housing scheme, five million houses would be built which would provide shelter to the underprivileged segments of the society. “Today, it is nearly impossible for the salaried citizenry to build their own houses,” he observed.

The prime minister lamented that in the existing banking system, the loan facilities were limited to the elite class. However, the government was making legislation to extend it to the low-income group.
Read more: Constructing 5 million houses a cakewalk for PTI?

Currently, only 0.2 percent of people in Pakistan availed housing finance against 80-90 percent in Europe, 30 percent in Malaysia and 10 percent in India.

Over 50,000 Housing Units for Gwadar Fishermen

In the initial phase of the scheme, 54,000 housing units will be constructed in Balochistan for the fishermen of Gwadar, whereas 25,000 units will be built in Islamabad for government employees.

The gathering was told that foreign companies were interested to invest in the housing project that would also boost another 40 linked industries besides creating job opportunities. The prime minister who earlier unveiled the plaques for construction of 110,000 houses in Quetta and Gwadar including 54,000 units for fishermen, said that instead of awaiting the government jobs, the youngsters should form their own constructions firms.

The prime minister explained during his speech that housing did not feature high on his priority list originally but an incident changed his way of thinking about the industry.

He directed the Balochistan chief minister to design a master plan of Quetta and allow the vertical construction to discourage the spread of the city.

The focus on PM Khan on Balochistan and directions being passed on to the CM give a clear message that the PTI-led government is interested to work on uplifting the lives of people living in marginalized areas of Pakistan.

PM Khan recently visited tribal areas and assured them of unconditional support and economic development during his tenure as PM. It is believed that such gestures by the premier are a healthy sign and must be transformed into concrete reality.
Read more: National Bank & Army lend support to PM Khan’s Housing Scheme

It is pertinent to mention here that the scheme was initially launched at an event held in Islamabad on April 17 where Housing and Works Minister Tariq Bashir Cheema, former Finance Minister Asad Umar, and various other government officials were also present. The prime minister explained during his speech that housing did not feature high on his priority list originally but an incident changed his way of thinking about the industry.

“My first priority was health, education, and employment,” the premier admitted. “But then I found out about a soon-to-be-retiring government employee who was told that the only two ways his family could retain their government residence was if his son got inducted in the same department if he died while still a government employee.”

Analysts believe that the Naya Pakistan Housing scheme shall help not only PTI and PM Imran Khan to better deal with the ongoing economic crisis and political challenges but also the poor who do not afford to build a house otherwise.
Read more: How can World Bank help Pakistan’s housing scheme?

This project if carried out the way it has been designed and outlined has the potential to become a landmark project in the history of Pakistan, experts opine.

Russia says US sanctions against it will not go unanswered

Will getting rid of Article 62/63 really help Nawaz?

100 years of women’s suffrage: How one group changed British history